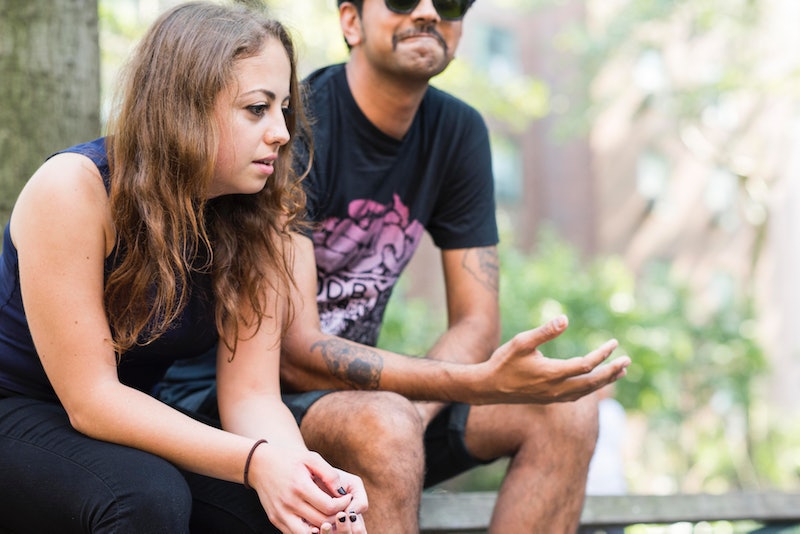 Women often go into dates with a sense of trepidation, and given our culture's lack of respect for women, it's no wonder. One National Coalition Against Domestic Violence study found that 35 percent of attempted rapes and 12 percent of completed rapes took place on dates. At least one third of American women who have been murdered died at the hands of a romantic partner, according to statistics from the Center for American Progress. The danger is very real.

These are the extremes of what could happen to a woman on a date, but many women every day experience objectifying comments, presumptuous questions, and unfair judgments. Here are some things you should never say to a woman on a date because she is probably sick of hearing them already.

This is usually a cheap trick for the speaker to stroke their own ego by hearing what about them appealed to someone. But it leaves the listener in a no-win situation. Either she has to be super flattering and tell you she thinks you're cute and smart and whatnot, or she has to be painfully honest and admit it was just sort of a "why not?" decision.

2. "What Nationality Are You?"

It can be fun to talk about your family backgrounds, but this question often feels like a covert way to call attention to a woman's physical features, especially when it's followed by guesses as to her nationality. It can also be a way to try to figure out someone's race, which really isn't relevant — or worse, a way to fetishize someone based on her race.

Since people assume that women are very concerned with their appearances, some might try to connect with women on dates by asking them about their workout routines or even their diets. This can be totally alienating to women who don't enjoy yoga or the gym and don't feel the need to do something they don't enjoy for the sake of their looks.

Thanks to toxic masculinity, women who date men may hear this one often. In fact, a guy once started off a date by telling me he did 100 pushups that day. This form of bragging is often based on the patronizing and untrue assumption that women want "manly" men who do manly things. Same goes with mentioning hunting or fishing, which, by the way, is a huge turnoff for many women.

I'm not sure what this means, but I've heard several accounts of women being told this on dates. Let's just start with the assumption that evaluating someone's body is off-limits. Appearance-related comments in general should be handled with care; you probably shouldn't go beyond "you look nice" on a first date. (I'm looking at you, dude who told me which of my OKCupid photos looked the most like me.)

If you're surprised someone's a feminist because she is polite and diplomatic and doesn't seem to hate men or practice witchcraft, you don't understand feminism. (Not that there's anything wrong with practicing wicca, but why the erroneous assumption about a person's religious practices? Not so good.) Given that a feminist is somebody who believes in gender equality, you should be surprised if someone isn't a feminist. This statement can insult your date by promoting unfair stereotypes.

7. Any And All Pickup Lines

Women want to be treated like — surprise — human beings, not machines to insert pickup lines into until sex comes out. Using pre-rehearsed lines gives off the impression that you're not really trying to connect with someone on a genuine level.

It's safe to assume that if we say we're into something, we're into it. If a woman plays video games or chess or creates computer programs, the appropriate response is to ask her about her hobby, not doubt that she has it.

Everyone always has the right to decline any physical interaction, and nobody ever owes any explanation for that. If a woman isn't ready to kiss you or come back to your place, the appropriate response is to let her know that's A-okay, not to make her feel like she has to justify it.

Same goes for this one. It's incredibly awkward to put someone on the spot like that. If you've taken the risk of asking someone if she wants to see you again and she's said no, you can't blame her for her honesty. And you definitely can't force her to say something she understandably doesn't feel comfortable saying because it could very well hurt you. It's best to just let this one go and avoid pressuring your date into anything she doesn't want to do.