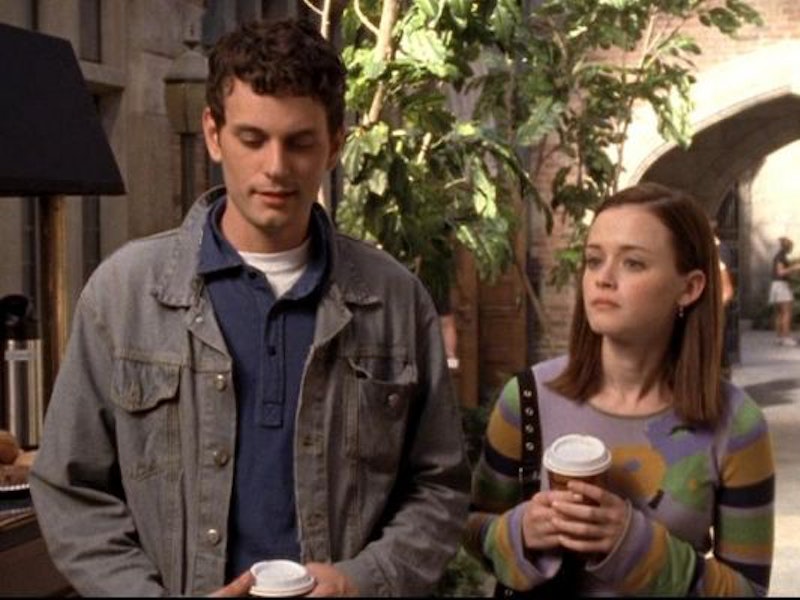 Now that the Netflix revival has finally been confirmed, many Gilmore Girls fans have channeled their excitement into speculating about which characters will be returning to Stars Hollow. Of course, for Rory fans, this translates to which one of her love interests will be returning to woo the single Gilmore gal. Will it be Jess, Dean, Logan (who, as most fans know, has been confirmed for the revival), or — the dark horse of Rory's potential love interests — the adorable Marty, portrayed by the equally adorable Wayne Wilcox? Wilcox, for the record, would definitely prefer it be the latter. Ahead of the revival, the charming actor — who openly declares, "I am Marty," — spoke with Bustle about his time on the original show, his feelings on Marty in Season 7, and — most importantly — why he will always be team Rory/Marty.

So, first off, the question on everyone's minds: Will Marty be in the Gilmore Girls revival? Unfortunately, that's not quote known yet: The busy actor is balancing his stage role in a Sense and Sensibility musical, trying his hand at being a playwright, and working on a web series. That said, Wilcox revealed if he gets a call from Amy Sherman-Palladino to join the revival, he is so there. As Wilcox (and, of course, Marty fans) sees it, his character has some serious unfinished business left to resolve. While Marty appeared in just 10 episodes in the series, the character endeared himself to fans instantly. Even now, the hashtag #TeamMarty is all over Twitter and Wilcox's Instagram page.

Wilcox couldn't be happier about being beloved by fans for his first television role. He truly is Marty at heart, and his love for Gilmore Girls is apparent in the way he gamely took a trip down Stars Hallow — OK, TV Yale — memory lane.

"There was no backstory. That was supposed to be my only episode. The whole way I got this show, as far as I was concerned, it seemed like a total chance of a lifetime gig. My agent called me and said they want you to do one episode and your character's name is Marty. So I shot it and I was naked, that happened. There were a whole lot of costume fittings for that naked scene. There were many different options, I will say that," he revealed.

"I remember walking away from the set thinking that was fun, I'll go back to my life now, and when I flew back from LA to my apartment in New York I had a bunch of emails from my agents with different dates of episodes I was supposed to fly back to LA to shoot. My agent got on the phone and said I guess they liked you because they keep writing more and more for you to do. I thought, 'OK, well here we go, let's make a character.'"

"So the Gilmore Girls was my first time on television ever and I had no idea what I was doing except that I was having a lot of fun. I put together a whole essay, like a synopsis of who I think Marty is. I sent one to Amy and one to Dan [Daniel Palladino], and I even sent them a mixtape of songs I thought was in Marty's head," Wilcox said. "It was my idea of how this storyline could go, or how this character could go, and how the two of them [Rory and Marty] could ultimately end up together. They fall in love and get their happily ever after, and they complete each other. Of course, they didn't say anything back because they are the ones writing the show and not me."

"Getting to know Ed Hermann [Richard Gilmore], for sure. Besides being an amazing actor, he was also an amazing guy. There was a day where we were sitting in a trailer waiting to shoot and we were talking about the business and being an actor. He schooled me. He laid it all out and let me know how it was going to go. All I can say is, since meeting him and talking to him, he was right," Wilcox said. "He was right. I think I'll cherish that most of all."

"A few months ago I did the Gilmore Guys podcast, and I was surprised by how many fans of the Gilmore Girls wanted Marty and Rory to get together, and they were upset in Season 7 when I came back as sort of a douchebag. Season 7 is, if I'm not mistaken, the season we don't talk about. I was doing the meet and greet after the podcast and I was like, my Marty wasn't a douchebag, he was perfect for her."

Wilcox Believes Marty & Rory Could Have Been Forever

"I think Marty brought a lot of answers to Rory as she was constantly questioning. Rory as a character is great because she's smart; she's also really savvy in terms of people and how she relates to boys and who she goes for. Marty was that guy in her life who looked at her and said everything is going to be OK, relax, we're going to figure it out together. And they did, as friends, for awhile. I think maybe more so than any of the other guys that Rory got with, they got each other without having to say a word."

"I can speak for myself when I say, every time I was there, [Sherman-Palladino] always asked me how I was doing and what was new with me. She was concerned about my career and my life as an actor, but also as a person. This kind of, like, odd thing keeps occurring, we keep running into each other," Wilcox said. "The last time I saw them was before the holidays. We all ended up at my favorite restaurant in New York City, and she ran up to me and gave me a hug. She said, 'Wayne, it's always good to see you, what's going on with you? Are you working? Are you happy?' She always made a point to come up to my trailer and say hi and touch base. I was a recurring character on a show that had already been famous by the time I got on it, so she didn't really have to do any of that stuff, but she did."

Marty Would Be Totally Successful Now

"It could go either way, couldn't it?" Wilcox pondered. "I think Marty has risen so high above his station and done so well for himself out of nothing. All he really had for himself was his mind. He got all the references, he was cool with Duck Soup, he brought home really good food from all his catering gigs. He's a really smart guy and I think he used that to build himself up."

Marty fans: Take heart in knowing, whether Wilcox returns for the revival series or not, the actor will always be Marty's number one champion.