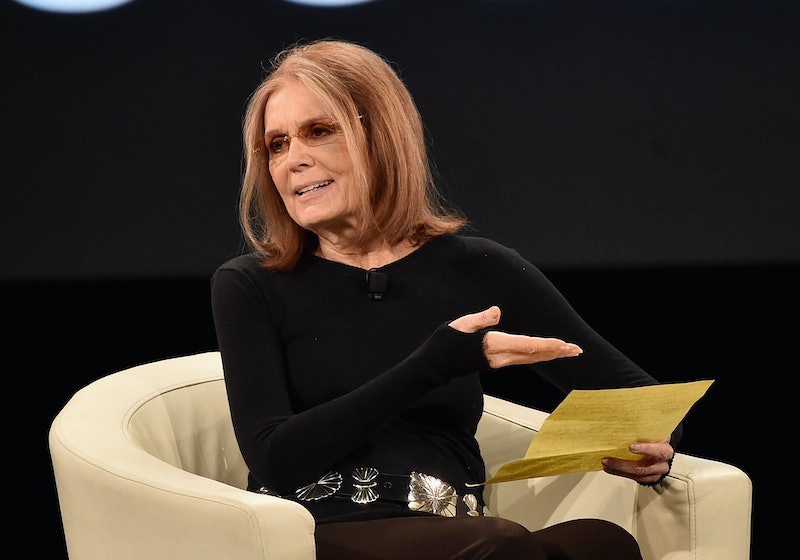 Feminist icon Gloria Steinem is getting a lot of flak — and rightly so — for a comment she made on Real Time With Bill Maher last Friday night. I think it's worth noting that Maher opened the interview by complimenting Steinem not on her new book or life's work, but for "looking great," by "promising" not to say her age, and by grabbing the belt buckle of her jeans without her consent, adding that she's "still rocking those hiphuggers." But those types of comments aren't anything new, especially for Bill Maher, so they aren't newsworthy. No, the headlines have come from when Steinem answered his question as to why so many young women are supporting Bernie Sanders and not Hillary Clinton.

In an answer that seemed to imply that voting for a woman is inherently more radical than voting for a socialist, Steinem said that perhaps young women are supporting Sanders because "Men tend to get more conservative because they gain power as they age, and women get more radical because they lose power as they age ... They're gonna get more activist as they grow older. When you're young, you're thinking, 'Where are the boys?' The boys are with Bernie."

Obviously, this was a horribly tone-deaf moment for Steinem, who is usually known for her intersectional feminism, her dedication to helping young female activists, and her general poise whenever she speaks. Feminists everywhere rightfully expressed their outrage at her implication that women who support Bernie are doing it because they're boy-crazy. Bustle's Julie Alvin put it this way:

Taking a look at the two candidates, I think we can safely say that the one [Bernie Sanders] who is advocating for a single-payer health care plan, free college, sweeping campaign finance reform, and other policies bordering on socialism is more radical than the comparatively centrist candidate who has taken lots of money from Wall Street and is such a part of the Washington establishment that she has lived in the freaking White House. Steinem seems to conflate being radical with voting for a woman rather than voting for the person with the more progressive policies, in which case the 81-year-old Steinem could make an argument for backing Carly Fiorina over Sanders.

I agree that it seems Steinem is conflating radicalism with voting for a woman. But — and I realize this may be an unpopular opinion — I think she also might have a point that needs to be unpacked. The pressure some young women feel not to support Clinton simply because she's a woman is real. And sometimes the men around us do influence our vote.

In 2008, my impulse was to immediately support Clinton, in large part because she is a woman. But as the debates wore on, I saw that her male competitor — who on paper had done less to qualify himself for the presidency, which as a woman, I resented — promised bigger, more radical changes. And that made it difficult to choose.

And my conflict between supporting Clinton or Obama in 2008 was influenced by my Obama-supporting boyfriend at the time. Incredibly political, he would engage me about the two candidates' differences, and force me to confront the realities of Hillary's more hawkish policies. He never told me to vote for Obama, but his influence — and the influence of the other guys (and girls) who were always around us watching the debates, supporting Obama — did make me feel "uncool" for thinking about supporting Hillary because she was a woman; like I was voting with my heart, not my head.

I resented this, and I also resented it when I saw Clinton attacked in gendered terms over and over again, or the way she was made to look lame next to Obama by virtue of being a woman over 50 on television. The sexism she encountered back in 2008 made me want to support her, but Obama made me choke up with hope. I didn't know where my loyalties should lie — with my sisters, or with my politics.

The pressure some young women feel not to support Clinton simply because she's a woman is real, and sometimes, the men around us do influence our vote.

What's most bizarre is that I don't actually remember with 100 percent certainty whether I voted for Hillary or Obama in the '08 primary. I think I voted for Obama in the end, but it might have been Hillary, because I remember later feeling vaguely embarrassed about my choice. But then again, I'm not sure. Maybe my embarrassment lay in not voting for a woman. It's telling that I don't even remember my decision; just my inner conflict about it. It felt like my feminism and my politics weren't being allowed to coexist for the first time. I remember wanting to hide my opinion, depending on my audience.

Now, eight years later, I'm too cynical to choke up during stump speeches. I've seen Occupy flourish and fizzle, my basic human right to autonomy over my own body debated, my mother nearly forced out of her house because of a big bank's interest-only loan, my friends' opportunities for adventure and career limited every day by their crushing student loans. And maybe that's why Sanders speaks to me more than Clinton.

My current boyfriend is no big fan of Hillary himself, though he prefers her on a pragmatic level, because he wants whoever has the best shot at the White House to get the Democratic nomination. When we watch her in debates, I sometimes think about how he once said that he often "found her to come off disingenuous," and how that initially pissed me off in that way you get defensive when someone talks about your mother. Yes, I know she's messed up, but only I'm allowed to talk about her that way. After he said that, I found I also started feeling more bothered by her politicking, and more drawn to Sanders' apparent sincerity.

Sanders looks like he'd be down to share a bagel, and I agree with most things he says. I also believe that we don't have democracy in this country so much as a plutocracy, and that's not going to change unless Citizens United is overturned and our entire social and justice system — from education to healthcare to mass incarceration to drug policy — radically reforms.

Is Bernie Sanders likely to get anything through Congress? No. Is Hillary? Maybe, but if it continues to be a Republican majority, also no. I fantasize that Sanders would do everything he can with executive orders and policy advisors to override our current broken system, "Socialist DGAF From Day One"-style.

But as much as I fantasize about this country becoming a socialist democracy, I also dream about the effect a female president would have on American girls. As Alvin put it, "Voting for a candidate based in part on her gender isn't an irrational way to vote. Scholars argue that voting based on 'descriptive representation' can be a good thing for democracy." So do I side with the more progressive candidate in the hopes that our political system is actually capable of radical reform? Or do I believe that the president is really just a celebrity with access to nuclear weapons, and that the greatest social change comes from which actor we decide to cast?

I believe that having a woman in the White House would do more symbolic good than having a old Jewish socialist man there, but both would make me very happy on deeply personal levels. I am a woman, but I am also a Jew raised to view the word "socialist" as a compliment and to tell it like it is. Which identity am I supposed to be more loyal to?

Feminism is about having choices, and conflicted ones at that. As actress Susan Sarandon put it at a benefit for Bernie Sanders in January, “I don’t vote with my vagina … It’s so insulting to women to think that [we] would follow a candidate just because she’s a woman." It is insulting to claim that a woman should vote for another woman simply because they share a gender, and it's additionally insulting to assume that those women who are not voting for Hillary are doing so because of their libidos. And while I may have let the men in my life influence my political decisions, that is less because I was seeking their romantic approval and more because I valued their opinions. In this election, I'll be voting with my head, my heart, and my vagina. Politically speaking, I'm pretty sure they're all under attack.