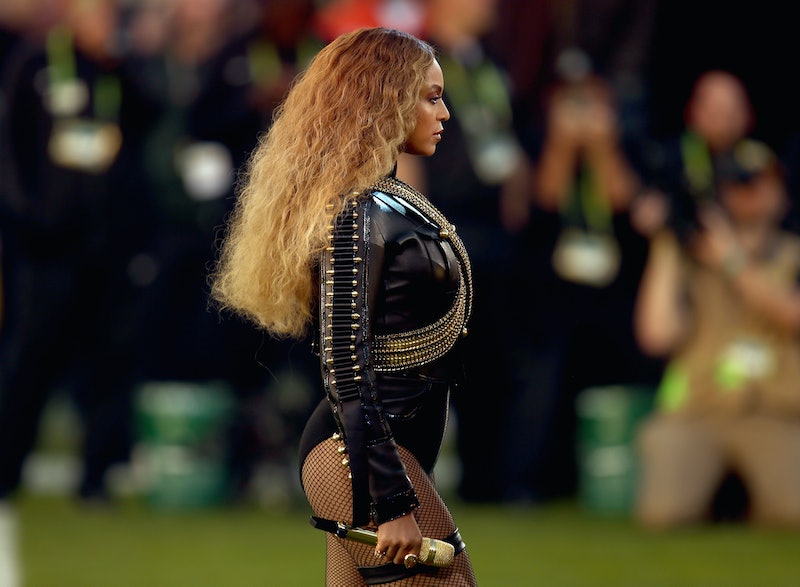 On the evening of Feb. 7, Super Bowl 50 brought with it some sartorial gems, from Lady Gaga's subtle tribute to the late David Bowie to Bruno Mars' retro hip-hop outfit to Blue Ivy's rainbow jacket. When it came to Beyonce's Super Bowl 50 performance, however, the Internet revealed its two faces: Its supportive persona on the one side, which praised Bey for an outfit that paid homage to Michael Jackson's Super Bowl ensemble from 13 years ago. And its hateful one, as social media grew more and more fueled with the critique that Beyoncé was looking a little too fat.

For a solid 12+ hours, Twitter has been gracing us with comments like, "Beyoncé is fat, I'm glad they only gave her one song," to "How Beyoncé getting fat? I thought she was a vegan," to "Beyoncé missteps during squat at Super Bowl halftime performance, when her fat ass drags the rest with it." Search "Beyoncé fat Super Bowl" on the social media platform, and you'll see that there's no shortage of vitriol.

Besides the fact that no one has a right to critically dissect the body of another human being, there are a few fundamental issues with this commentary. 1. Beyoncé isn't fat. Certainly not by any clinical standard or BMI scale I've ever come across, or the personal standards of anyone with a sprinkle of logic in their left cerebral hemisphere. And 2. Calling someone "fat" or telling them that they "look fat" isn't inherently an insult. It only becomes one when we allow derogatory uses of it to affect us negatively, as well as when the terminology is applied to someone who does not exist in a fat body and doesn't subscribe to that particular identity.

Unfortunately, we don't yet live in a world that is able to realize that fatness does not have to equate to insult. Even Jennifer Lawrence — who the universe loves to call a body positive role model — told Barbara Walters, "The word fat, I just think it should be illegal to call somebody fat on TV." I don't doubt that she was well meaning, in her own J. Law way (the rest of the interview made some valid points about assuming responsibility for the effects media can have on a younger generation). But personally, I don't think she's right. It shouldn't be "illegal" to call someone fat. Doing so would only further stigmatize fat bodies and suggest to that younger generation and everyone else that being fat is always bad. I do, however, think we should be changing the way we utilize the word.

The issue with calling someone "fat" who doesn't actually have any visible fat on their body is that we're shrinking the box of "acceptable body types" even more. Beyoncé may have "thick" legs — the legs of a badass dancer who undoubtedly works out a ton in order to nail those killer moves we see in "Formation." But she has a flat stomach. She has a small waist. She doesn't have visible double chins. Her body is very likely not relatable to the body of the teenage girl struggling to love her visible belly outline because cafeteria bullies are calling her "fat." Nor is her body particularly relatable to most of the fat activists fighting to reclaim the word after decades of hearing it used in condemning connotations only.

I don't know many people IRL who would agree with the Twitter haters on this one. I don't know anyone who would look at a picture of Yonce in her leather jumpsuit and think "fat." Yet — perhaps because she has more visible curves than most of the women we're accustomed to seeing in our media streams — many are choosing to vilify her body as being somehow "less than." And by implying that Beyoncé is fat in a culture that predominantly perceives fatness as ugly, undesirable, always unhealthy, lazy, disgusting, unemployable, etc., we're then suggesting that everyone with a body likes hers or larger must also be those characteristics. That's a lot of people being called fat and bad and ugly when those words need not apply.

But as a woman who identifies as fat, my issue goes beyond "Beyoncé isn't fat." It's very obvious that she isn't, and anyone who's opinion I remotely care about would likely agree with that sentiment. My issue is that the more we keep using fatness as a means of verbally abusing someone, and the more we apply it to individuals who cannot attest to the experiences of living in a fat body, the more invalidated the experiences of living in said fat body seem to become. The more we begin to lose something that, for many of us who give a shit about body positivity and fat positivity, has become something of an identity.

There's a commonly heard mantra that can be found on the Web that goes something like this: My body does not define me. And of course, there are a whole myriad of characteristics, eccentricities, likes, and dislikes that make up a human being. To not want to be defined by your body likely means, to some people, to not want to be thought of in terms of one's body and only that. But in conversations with a lot of fat positive activists and proponents, something that I hear even more is the admission that fatness can be a positive defining characteristic if you simply decide that it is.

When I began reclaiming my fatness as something that I could actually love — as something that had the ability to make me feel beautiful and strong and empowered — I stopped perceiving it as a word that could cause hurt. If someone wants to call me fat, they can feel free to do so. I won't think of it as an insult, even if that's the intention it's being uttered with, because I do not believe that it is an insult. And through my work, I — alongside many — am hopefully fighting for a time when the same will be true for a lot more humans.

As musician Beth Ditto told Advocate in 2012, she welcomes people to "talk about her body as much as her music," because her talents and her persona aren't "just about the music," but also "about the political message." So I welcome folks to call me fat because it is what I am, and I do not feel ashamed about that fact. Much like I am tall, Latina, a fan of folk music, a nerd, and a devotee of the scrunchie.

But that doesn't mean I'm not still waiting for the day when women who simply aren't fat and who live with a certain amount of thin privilege stop calling themselves as much. It doesn't mean I'm not waiting for the day when part of my identity ceases to be part of their negative self-talk. Or part of Twitter's fuel for chastising the bodies of others who do not subscribe to my identity or that of my fellow fat positive proponents.

The truth is that fatness is still used by individuals in synonymity with, "I feel ugly today." It's still used by trolls who want to claim that certain celebrities are ugly when they deviate ever so slightly from the slender, cis, white, able-bodied tropes of beauty thrown at us from every corner. It's still assigned to bodies that don't actually know what it's like to live as fat people in a world that hates fat people. And it's still used as a lesson of sorts — a word that's meant to teach kids and everyone else exactly what they shouldn't be or aspire to if they want to be accepted.

Beyoncé isn't fat. But even if she was, her talents wouldn't be compromised. Her ability to sing, to dance, to inspire, to fight wouldn't be suddenly mute. Whether she has or hasn't gained weight is no one's concern, nor does it affect her role as a performer. Nor does it affect the fact that she's encouraging women of color to live without apology.

Beyoncé isn't fat. She is not a spokesperson for the identity so many people have finally started to embrace despite the oppression they have received and continue to receive for it. But she is a damn talented human being. And one who would continue to slay regardless of how her body changes.