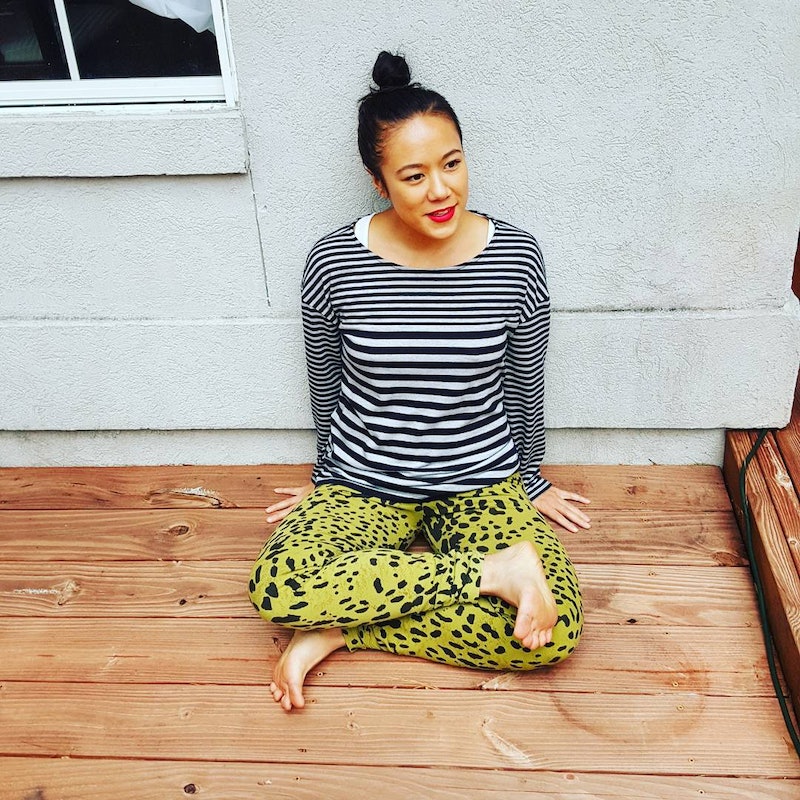 Growing up, I rarely ever broke the rules. When I graduated high school, my goody-two-shoes ways were still in full force, and so I chose to follow the life path that my strict parents had always wanted for me: finish college, get a solid job, get married, and lock down that white picket fence.

By the time I graduated from my master's program, though, I realized that life blueprint wasn't really my cup of tea. The pressure of landing the kind of career that would please my parents was causing my mental illness to spiral out of control, and the thought of settling down made me slightly nauseous. In general, I was pretty miserable trying to fit my life into that mold.

So, I went rogue. I took off for a while and did some things that my old-fashioned mother and father didn't really approve of — and by that, I mean I went to yoga teacher training and flitted around South America for a while. Along the way, I figured out a few things — what I want to do with my life, what I don't, and how that factors into what my parents always wanted for me. But even after I had come to all these decisions, I had to figure out one more thing: how to tell my parents about it.

Before we go on, I want to note that I'm not prescribing these choices to anyone, or deriding anyone who made different choices — they work for me, and that's all I know for sure. Rather, I wanted to share how I had these difficult conversations with my parents, in hopes of helping out others who are also struggling with how to tell their parents that the life they want to live is a bit different from the life their parents hoped for.

Here are six ways I told my parents that I wanted different things in life, and how I did it.

1. I Don't Want My Father To Walk Me Down The Aisle At My Wedding

This was the absolute hardest to break to my parents. My father may be tough on the exterior — old-fashioned, ex-military New Yorker — but he's nothing but mush on the inside. I think he's dreamt of walking me down the aisle since I was a little girl, especially after seeing so many of my cousins do the same with their dads.

I hated to, in a way, rob him of this joy, but there is simply so much baggage attached to this idea for me that I couldn't bring myself to ever want it. We still live in a society driven by patriarchal values, and I don't feel comfortable taking part in this tradition, no matter how much I love and appreciate my dad.

How I Did It: Well, it didn't happen overnight. I started a few years ago, beginning by dropping pieces of information about where this tradition really comes from. He took it well at the end, when I was explicit about my decision, especially because I explained how it doesn't affect our relationship.

2. I Don't Want A Wedding At All, Actually

This doesn't mean I'll never get married. But I do know that I'm not interested in going down the classic ceremony-and-reception route. My partner and I decided this a while ago, after witnessing far too many couples come away from their wedding frighteningly stressed, with financial debt on their shoulders.

How I Did It: I explained this one from a financial point of view, rather than telling them I'm "not the wedding type." I told them that the student loan debt I was currently swimming in would probably follow me for a long time, and I don't want to put even more debt on top of that. They were pretty understanding, although they did say that if they had the money they would pay for one. It was sweet.

3. If I Ever Get Married, I'm Not Going To Take Anyone Else's Last Name

I know this isn't uncommon these days, but my parents still consider keeping your last name after marriage new-agey. I recognize that this isn't an uncommon line of thinking, and I respect anyone who wants to change their name, but I also love and want to keep my own name. I think it has a nice ring to it. Besides, being an only child means that I'm the only one of my generation with this surname, and I'm too vain to let that go.

By the way, this particular choice is not a backhanded way of saying that taking your husband's last name isn't feminist. That can be an incredibly feminist act. This just happens to be my choice, and as the Backstreet Boys eloquently put it once, I want it that way.

How I Did It: I broke it to them over tacos when I was visiting for the holidays last year. Surprisingly enough, my mom was thrilled to hear it. She adorably noted that she thinks that my name already makes me sound like I'm a famous writer, so why on earth would I ever change it? I giggled with her and thought to myself, Well, that was easy.

4. I Have No Plans To "Settle Down" Anytime Soon

When I first started traveling in 2013, my intention was to just see a few countries and call it a day. But I ended up liking being on the road a lot more than expected, and when I figured out a way to earn an income along the way, I realized it wasn't out of the realm of possibility to continue traveling for a long time.

While I do want a home base of sorts, I don't want to tie myself down to just one place. I find that constant variety nurtures my creative process, and the global movement has actually done great things for my yoga teaching career. Most importantly, though, I love it, and traveling has dialed up the level of happiness in my life.

How I Did It: For the past few years, my parents adopted this habit of making off-handed comments in conversation about how my traveling was just a phase I was going through. I started off by gently butting in and correcting them. I told them that, no, this wasn't merely a phase, and, yes, I plan to do it for a while. They eventually got the hint, even though they're not excited about announcing these plans to their friends.

5. I Don't Want To Live Permanently In The United States

I'm not hating on America by announcing this one. It's just that there are a few other spots around the world that suit me — and my preferred lifestyle — in better ways. A major factor in this decision is the fact that my partner is Australian. After I lived in Byron Bay for a year with him, it also feels like home to me. Besides, his family is still in Sydney, so it wouldn't be very fair if we permanently planted down in the U.S.

How I Did It: I think they saw the one coming, so I didn't have to drop any bombs. My parents started asking less and less questions about when I was "coming home." Nevertheless, my SO and I sat down with them in October 2015 and gave them a mini-speech: even though we don't want to live full-time in the U.S., we have every intention of including them in our lives and making sure we see them often enough. After all, that's what they truly care about.

Again, not an uncommon thing to hear these days. There are plenty of women who choose not to have kids out there, and less and less people are responding with a shocked look on their face. But to my parents' ears, it stings a little bit. They're old school; to them, procreating is a phase of life every woman gets to at some point.

How I Did It: I've tried to tell them this plenty of times, and each time I cite all the other things in life that can make people happy besides babies. They listen. They nod. But something tells me they don't quite believe me yet. My mom keeps saying: "You'll change your mind when you hit 30."

Maybe she's right; it definitely wouldn't be the first time. But regardless of whether I change my mind about any of this stuff, which is certainly a possibility, I'm pleased that I've spoken up to my parents about my choices — even if they're not fully on board.

More like this
Why You're Seeing Green Bandanas At Abortion Rights Protests
By Lexi Inks
GIRLI & Q Fell In Love At A Skatepark & Never Looked Back
By Jessica Morgan
How To Come Out Online, According To Trevi Moran
By Melanie Mignucci
Are Cancer & Cancer Compatible In A Relationship?
By Kristine Fellizar
Get Even More From Bustle — Sign Up For The Newsletter