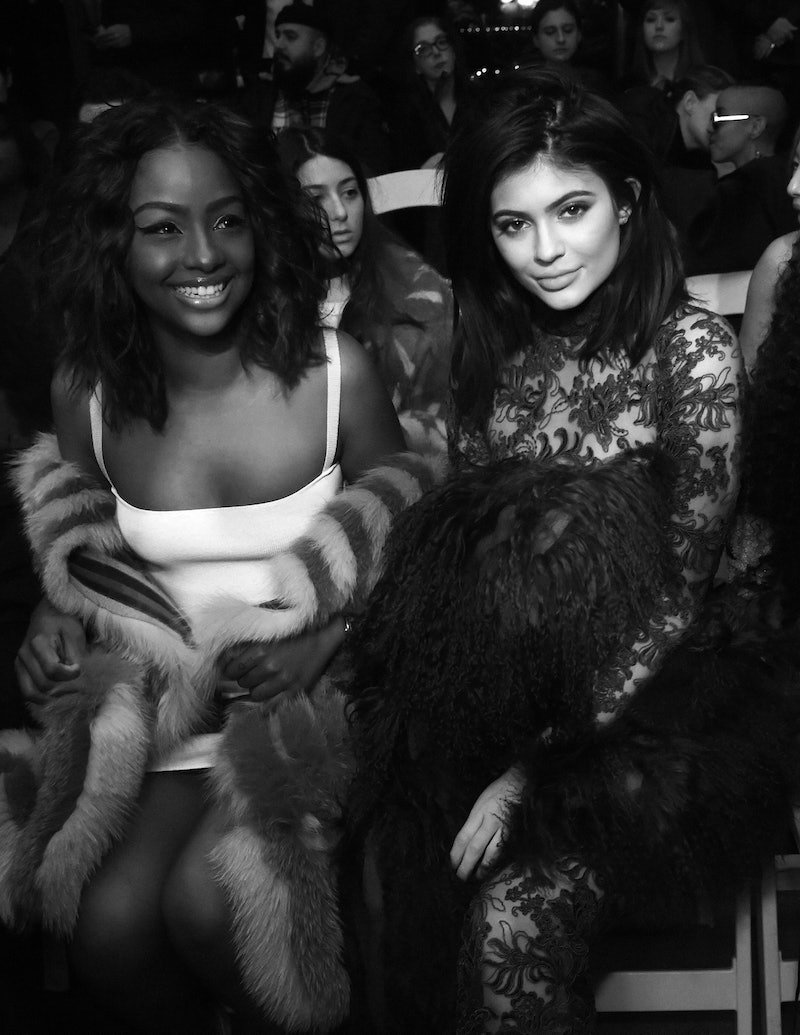 Well, we all saw this coming. Having conquered liquid lipsticks, Kylie Jenner has marshaled her forces for her next conquest: nail polish. Yep, King Kylie has teamed up with Sinful Colors to release a limited edition collection of laquers at a drugstore near you, and the colors in Kylie Jenner's nail polish line are the secret weapon for slaying your next manicure.

Speaking of that polish collection, WWD reports that we have not one, not two, but three Kylie + Sinful Colors collabs coming our way this spring. The King Kylie SinfulShine 2 Step Collection will hit the shelves in early March, with limited edition releases following suit in April and May. A sneak preview of the 20 shades from the first collection reveals that they fit in perfectly with Jenner's neutrals-and-jewel-tones aesthetic.

Kylie-approved beige shades such as "Kreme De La Kreme" and "Karamel" sit alongside metallic silvers and golds ("Slay Gray" and "The Royal Me"), but it's the jewel tones in this collection that make it totally covetable. Not only do they add variety to the release, but they also show a step forward for Jenner, who will need to appeal to more than the neutrals crowd if she wants to truly dominate the beauty industry.

Though Jenner isn't exactly known for embracing the rainbow, all we need to do is take a gander at the Lip Kit By Kylie line for clues as to what future colors the reality queen would deem fit for her subjects' tips. Just in case you've been in chilling in a cryogenic chamber for the past two months and missed it, there are now six shades in the Lip Kit arsenal, and they're not all neutrals. That's right — Jenner made the bold move to include some color in her latest Kylie Cosmetics release. Add that to the range we see in the first King Kylie SinfulShine collection, and I'm betting we'll see Jenner explore more jewel tones, while still offering her trademark neutrals.

As for Kylie's favorite nail? Despite single-handedly popularizing the coffin nail trend, the star told WWD her favorite style is a short, natural nail in an unexpected color — for the woman known for her black, neutral, or dusky manicures of the past, that is. "Right now I really like the pinks," she said, referring to "Miss Majesty" and "Miss Chief," two pink shades we'll soon be able to pick up from her upcoming collection. My nails are ready.

More like this
10 Show-Stopping Manicures From The 2022 BET Awards
By Paris Giles
Hailey Bieber's "Glazed Donut" Nails Are So Minimalist Chic
By Danielle Sinay
'Stranger Things’ Natalia Dyer Has A Genius Hack For Taming Her Fringe
By Tomi Otekunrin
Yes, You Can Buy Off-White’s New Beauty Range In The UK
By Tomi Otekunrin
Get Even More From Bustle — Sign Up For The Newsletter