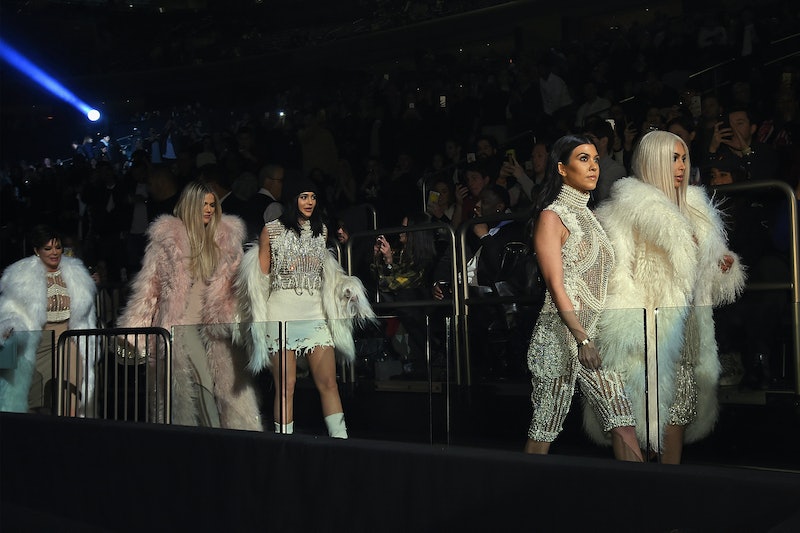 Do blondes have more fun? I'm not sure that can be scientifically proven. But based on the empirical (and visual) evidence, Kim Kardashian enjoys being platinum blonde. At least for now. She's kept the white hot hair hue for several days, debuting her light 'n' bright strands at New York Fashion Week. It was a huge fashion scene splash, since Kardashian had been out of public view for a few months after welcoming her son Saint West. She popped up in a few Instagram posts, rocking her usually glossy brown hair in boxer and French braids. That seemed like a cute and no-fuss look for Kardashian, who returned to her usual brunette a mere few weeks after going platinum in 2015, returned to her favorite easy hairstyle while blonde.

The reality star posted a photo from backstage at Saturday Night Live this past weekend. Her husband/fashion designer/rapper Kanye West was the musical guest and Kardashian was making a kissyface in front of his dressing room sign. It was a sweet and proud moment. But she also had her locks fastened in two French boxer braids. So, while braids are clearly a 2016 hair trend, Kardashian mashed up two distinct braid styles in one and while blonde.

Here, she fused two of her "key" 2016 looks in one. She has worn braids repeatedly so maybe it's not a reliance on this style due to its ease and the fact that it keeps hair out of her face. Maybe it's not solely about utility. Perhaps Kardashian really loves the look of ornate, fancy braids whether she is a brunette or a blonde. Or it could be that the blonde is a lot of look, even for Kim K., and she is dealing with such a drastic change by relying on what has become a "go to" style for her and that has been copied by her little sister Khloe Kardashian?

Here's another more recent shot of Kim-as-a-blonde. As noted, she ditched her flaxen follicles after a few weeks in early 2015, admitting she wanted to remain blonde longer, but it damaged her hair too much.

This stint as a blonde appears to be the work of a really malleable wig that allows itself to be braided.

Here's the big question, though. When KKW will go back to brown? I am guessing by week's end. Why so soon? Here's my rationale.

1. NYFW Will Be Over

NYFW will be winding down and this blonde look (read: wig) is likely too much upkeep and too high maintenance for everyday life with two kids. Kardashian can have a staff of nannies, but still seems hands on with North and Saint. Even with her fabulous, heavily photographed daily existence, this color could be a hassle.

History will repeat itself. Kardashian didn't stick with blonde too long last time, either. 2015's blonde was a dye job and equally high maintenance.

3. Been There, Done That

Platinum blonde is her thing once a year. Do it and move on!

So that's why I expect Kardashian to go back to brunette sooner than later. You heard it here first.

More like this
Millie Bobby Brown's Blonde Hair Is Very Britney Spears Circa 2002
By Paris Giles
10 Swoon-Worthy Beauty Looks From The 2022 Cannes Red Carpet
By Olivia Rose Ferreiro
8 Knockout Beauty Looks From The 2022 Billboard Music Awards
By Audrey Noble
How To Master Baby Braids, According To TikTok
By Tomi Otekunrin
Get Even More From Bustle — Sign Up For The Newsletter