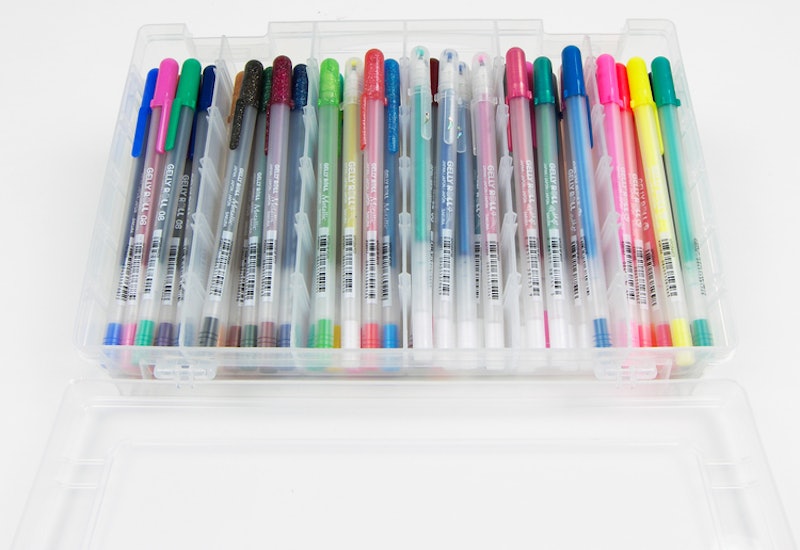 You know, when you stop to think about it, some of the things we were obsessed with in the ‘90s were really kind of… weird. There wasn’t always a lot of logic behind the things that we liked; some bizarre force of irrationality fueled many of our favorite obsessions, and we took them and ran with them. Because seriously: JNCO jeans? Shoes made our of plastic? Animal-shaped bean bags? What was up with all that?

Of course, it’s only now that I’m a grownass adult that I realize exactly how odd the hottest trends of the ‘90s were. While it’s true that the same might be said of the trends of most decades — hindsight is always 20/20 — the ‘90s do seem to be a particularly lawless era. We were mixing prints, painting everything in neon, and calling it all that and a bag of chips with abandoned. I suspect it was actually an expression of the optimism of the time; we were living in an economic boom, technology was full of new and exciting things, and the world was our proverbial oyster, so why not get as loud as possible about it?

And you know what? Ultimately, maybe it doesn’t matter that we didn’t necessarily know why we liked certain things; we just knew we liked them, and that was enough. It was the ‘90s equivalent of “you do you,” so as nonsensical as I may find the items, people, and trends seen here, you know what? That’s OK. If they’re your jam, they’re jam, and you don’t have to justify that to anyone.

Every generation has their group line dance thing, and for ‘90s kids, it was "The Macarena." Too bad we didn’t really know what the song actually meant at the time.

…Or maybe it’s better that we didn’t know.

Side note: It occurs to me that One Direction were babies when "The Macarena" was a thing. Literal babies — the song was first released in 1994. That makes me feel so old. Ancient, even.

3. Clothing That Was Eight Sizes Too Big

Out of all the gimmicky dolls that the ‘90s produced, Quints were perhaps one of the most inexplicable. They didn’t really do anything; all they did was sit there, leeching off of your good will, constantly telling you about all the accessories they absolutely needed to live a fulfilling, pretend life.

Kids: So ungrateful. Am I right?

For the amount of time and energy we invested into our Tamagotchis, Digimons, and GigaPets, we may as well have just gone and gotten an actual pet. We would have gotten a lot more out of the relationship.

I made this observation fairly recently, but I think it’s notable enough to make again: Lunchables? Not actually that great. The original ones were nothing more than cheese and crackers plus the bonus addition of a fun-sized Snickers bar, which could be easily (and probably both more cost effectively and more deliciously) recreated by, y’know, putting together your own combination of cheese and crackers. The pizza ones captured our attention thanks to the fact that they looked like pizza; however, they sure as heck didn’t taste like pizza. And the taco ones? I don’t even want to know what the taco filling was actually made of. Seriously, you guys. I just don’t.

Why did we need so many of them? What made them different from other pens? Were they really that special? I have no idea. But I had to have them. And so did pretty much everyone else.

Not only that, but we’re still obsessed with all things Lisa Frank. Something about those brightly colored dolphins, pandas, and unicorns just calls out to us, convincing us against all our better judgment to wallpaper literally everything we own with them. I’m pretty sure that if it were socially acceptable, many of us would still have bedrooms full of Lisa Frank paraphernalia. Just sayin’.

9. Cereal That Looked Like Miniature Versions Of Other Foods

Beanie Babies were like diamonds: Not inherently valuable, yet coveted all the same, largely due to an enormously successful marketing campaign.

They were really uncomfortable. Maybe that’s why these days, people are wearing them with socks.

Honestly, I’m not sure whether we were obsessed with these, or whether the Marketing Powers That Be determined that we were obsessed with them. Either way, though, they were everywhere — on our school notebooks, dangling from our ears, scrawled across our backpacks, split up into two weird-looking necklaces in order for us to express our undying love and devotion to our BFFs, and so on and so forth. The yin yang thing was particularly problematic, in retrospect; way to encourage cultural appropriation, ‘90s.

T-shirts, Hot Wheels, coffee mugs, whatever. If it changed color via either temperature or the presence of water, it was cool.

I was not a Friends fan (I know, I know), so I missed the boat on the Rachel; all I know is that absolutely everyone wanted their hair to look like that. These days, people tell me that my celebrity doppelganger is Jennifer Aniston (I think it has something to do with my schnozz), so maybe I see what happens if I give it a revival.

More like this
‘90s Streetwear Brands That Are Making A Major Comeback
By Dominique Norman
David Schwimmer Doesn't Remember This Classic 'Friends' Episode
By Sam Ramsden
5 Mini Skirt Outfits To Wear, Inspired By These Brave Souls
By Avery Matera
17 Genius Things You Can Do With Old Clothes That You Can't Donate
By Brittany Bennett and Dominique Norman
Get Even More From Bustle — Sign Up For The Newsletter