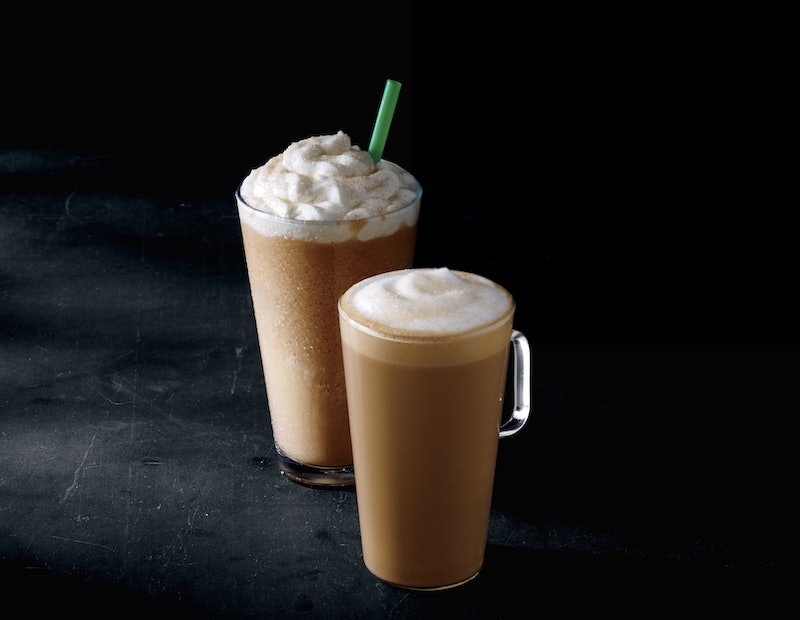 When I first heard Starbucks was launching a Smoked Butterscotch Latte for a limited time only, I had so many questions — like, what does a Smoked Butterscotch Latte taste like, even? For one thing, when I think smoked, my mind instantly jumps to smoked cheese. I'm sorry, that's just how I've been conditioned. Also, maybe it's because this drink contains butterscotch, but is anyone else vaguely reminded of an equally soul-warming, delicious drink our dear friend Harry Potter used to drink at a little pub in Hogsmeade? I'm just saying — with all these references bouncing around in my under-caffeinated head, I was beyond curious to finally try a sip of the stuff for myself.

In a surprise none of us saw coming as we lapped up the final dregs of our Starbucks Molten Chocolate Lattes, the Smoked Butterscotch Latte made its Starbucks debut Feb. 16, along with the Teavana Citrus Green Tea Latte, both of which were already pretty popular players at the Starbucks Reserve Roastery and Tasting Room in Seattle. In fact, the drinks were such crowd-pleasers that Starbucks decided to bring them to the mainstream, adding them temporarily to its menu through March 21. The Smoked Butterscotch Latte, as described by Starbucks, features a rich "Smoked Butterscotch sauce" and a "sprinkling of Butterscotch Sugar — perfect for when you need a little extra warmth on cold days, and just a kiss of buttery caramel," which pretty much sounds like heaven in a cup. At any rate, I was intrigued, and couldn't wait to finally try a bit of this magic for myself. And yes, it was in fact magic. Here were some taste test takeaways:

One sip in, and I instantly felt the tug of deja vu pulling at the back of my brain. But just what was it exactly about this beverage that tasted so familiar to me? I could immediately identify the butterscotch, but then again butterscotch is such a classic flavor that it never really changes in any of its renditions. But, there seemed to be notes of something else too that I couldn't quite figure out. When I brought this up, my coworker and fellow Starbucks enthusiast Emma Lord chirped up immediately: "It tastes like a grownup Skinny Vanilla Latte." Ding! Except, it was much richer, deliciously buttery, and way more satisfying. I was sold.

It tastes like a Werther's Original butterscotch candy — I mean, duh

Of course it does — and that's a compliment. The butterscotch flavor was so recognizable. It tasted exactly like you were sucking on a hard candy your grandpa just gave you, and it paired unbelievably well with the underlying espresso shots that give Starbucks drinks their signature kick.

Smoked? I don't get it, but I like it

The "smoked" part of this drink's description is what initially threw me for the biggest loop, before I even had a chance to try it. I'm not sure I got "smoky" vibes from this latte after tasting it, but to reiterate, the butterscotch flavor really was amazing. A+.

It kind of reminded me of a Pumpkin Spice Latte

Maybe this is what I was thinking of when I was first trying to pinpoint the other flavors in this drink. The Smoked Butterscotch Latte kind of reminded me of fall — which, on a blustery February day, seems like a dream come true. In the drink's description, Starbucks says the SBL contains "notes of smoked butterscotch and a dash of spice." I'm not sure what that spice was, exactly, but it could very well be what was giving me all the familiar PSL feels. Needless to say, I was into it.

It definitely warms you through and through, not to mention it gives you an unexpected boost of energy (there's 75 mg of caffeine in a tall). The Smoked Butterscotch Latte is around until March 21, with prices starting at $4.25. You knew from the second it was announced that you wanted to try one, so head over to Starbucks and watch the baristas work their magic. And, if you're feeling particularly adventurous, try out the new Teavana Citrus Green Tea Latte too. After all, it's only around for a little bit of time — what do you have to lose?