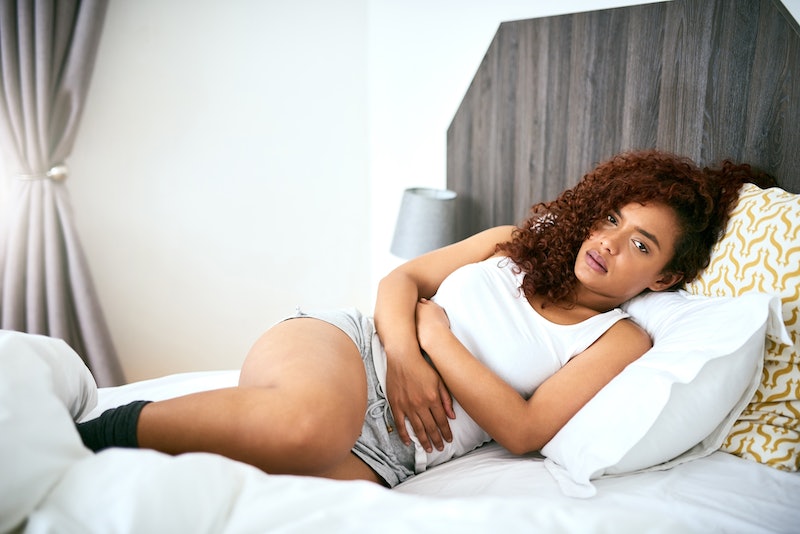 Periods are a normal, once-a-month occurrence that most women experience for most of their adult lives (Er, yay us?). They’re not fun, but they’re not unusual, strange, or shameful either, and most of us regard our monthly flows as ordinary aspects of having lady parts. And yet, for a biological process that seems like it should be fairly run-of-the-mill, menstruation can be a surprisingly tempestuous thing, affecting our bodies in all sorts of strange ways, while at the same time being subject to the influence of a variety of external forces.

Some women have extremely regular periods, occurring at the same interval every month, with a predictable flow and duration, and accompanied by the same symptoms. But, for many women, menstruation is full of surprises (and not the fun kind): They might have uneven intervals between periods, or a light flow one month and a heavy one the next, or a very short period followed by a long one. Irregular periods aren’t in and of themselves a bad thing, and they don’t necessarily reflect on your health or fertility. A lot of issues can affect your menstruation, from simple lifestyle habits to broader health problems.

If your period suddenly changes, is wildly irregular, becomes unusually heavy, or simply disappears for a number of months, take some time to talk to your doctor. Although some of the things that affect periods are lifestyle choices or one-time issues (more on those below), there are more serious medical conditions that can cause periods to act strangely or to go away, like polycystic ovary syndrome (PCOS) and endometriosis. These disorders can affect your everyday life, as well as your future fertility, so it’s worth getting checked out. Furthermore, if you’re experiencing symptoms of PMS (like cramping, fatigue, and mood swings) that are so severe that they interfere with your daily life, talk to your gyno; you may have a condition called premenstrual dysphoric disorder (PMDD), and there may be treatment available to make your periods more tolerable.

If you’ve ruled out these major medical issues and are still having weirdo periods, there might be something else going on. If you’ve ever gotten (or not gotten) your period and thought, “What the hell?!”, these factors may be an issue:

A time of intense stress can cause your period to become irregular or to disappear for a while. Everyday Health reports that we don’t know exactly why stress has this affect on menstruation, but that it appears to have to do with the hypothalamus, a small but incredibly important section of the brain. Stress affects the functioning of the hypothalamus, which in turn affects the functioning of the pituitary gland, which in turn affects the thyroid, ovaries, and adrenal gland. These organs control our hormones, which control ovulation. When ovulation is disrupted or the ovaries aren’t working properly, it can affect menstruation. Lesson: Everything in the body is connected to everything else! (Also, try to find some time to chill out).

Major changes in routine can cause your periods to go off schedule, so if you’ve recently been traveling, moved to a new time zone, started working a different shift, or done something else to dramatically change your life and schedule, that might be the culprit.

Being over- or under-weight can affect menstruation because weight influences estrogen production. Estrogen is a hormone that, among other things, helps to create the uterine lining that will either support a fertilized egg or, in the case that there isn’t a fertilized egg, will be shed during your period. When you’re significantly overweight, your body creates excess estrogen, which can cause you to stop ovulating. This overabundance of estrogen can also cause the lining of the uterus to thicken, until it is eventually released, resulting in an unusually heavy flow. “Obese women usually experience heavy, infrequent, longer-lasting periods,” Dr. Veronica Lerner, an assistant professor of obstetrics and gynecology at NYU Langone Medical Center, told Health. Excess estrogen can also eventually lead to an increased risk of endometrial cancer, so it’s important that women who think this may be a problem talk to their doctors. Dr. Lerner explained that going on birth control may decrease one’s risk of this type of cancer.

Women who are underweight, especially if they’ve lost a lot of weight suddenly, can have the opposite problem with their periods: Instead of producing too much estrogen, they produce too little, which can decrease the frequency of ovulation and cause periods to occur infrequently or to stop altogether. Maintaining a healthy weight is also an important aspect of promoting fertility.

According to the National Institute on Alcohol Abuse and Alcoholism (NIAAA), alcohol can contribute to irregular periods, as well as to infertility. “Alcoholic women are known to have a variety of menstrual and reproductive disorders, from irregular menstrual cycles to complete cessation of menses, absence of ovulation (i.e., anovulation), and infertility,” the organization reports. The NIAAA says that even more moderate amounts of alcohol can affect menstruation, explaining, “alcohol ingestion at the wrong time, even in amounts insufficient to cause permanent tissue damage, can disrupt the delicate balance critical to maintaining human female reproductive hormonal cycles.”

On the whole, regular exercise is great for health, but overdoing it can cause a condition known as “amenorrhea” (AKA the “absence of periods"). Although you might at first think, “Sweet! No periods!”, amenorrhea can lead to serious health risks. Amenorrhea occurs when too much exercise causes decreased levels of estrogen — too little estrogen to have a period. That lack of estrogen can cause osteoporosis, a condition characterized by brittle bones. We usually associate osteoporosis with elderly people, but overtraining can lead even young women to develop weak bones, which in turn can lead to fractures and permanent problems with posture, mobility, and pain.

It seems obvious that forms of birth control could affect periods — after all, many of them work by preventing ovulation, which is a central aspect of the menstrual cycle. Many methods of hormonal birth control, such as the pill, ring, or patch, decrease the length and severity of periods, while non-hormonal IUDs like ParaGard can cause heavier periods. However, medications that seem to have nothing to do with your reproductive organs can also have a significant effect on menstruation. Medications such as antidepressants and antipsychotics, blood pressure medication, chemotherapy, and allergy medicines can all cause periods to stop. If you start taking something new, and your period suddenly becomes irregular or absent, talk to your doctor about whether your medication might be the problem.