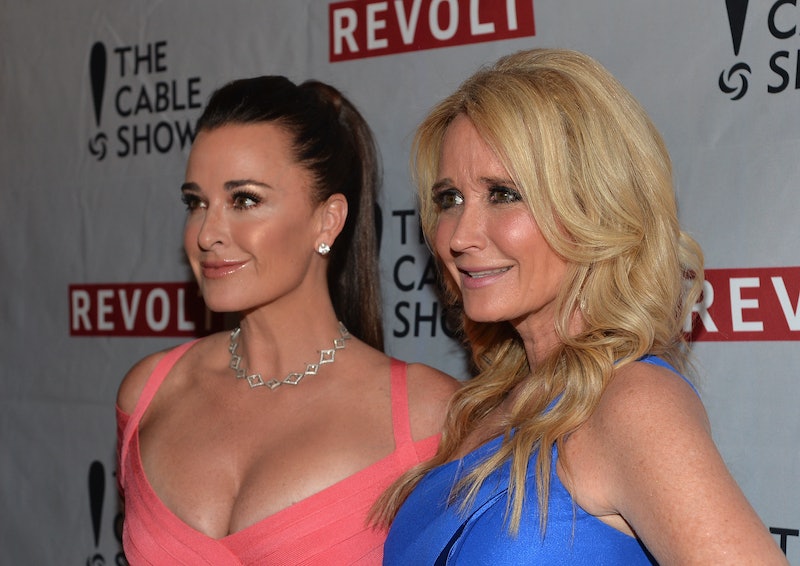 One of the more difficult relationships to watch crumble on Real Housewives of Beverly Hills is that of Kim and Kyle Richards. The two sisters have certainly had their highs and lows over the years, but at the start of the current season of RHOBH , Kim and Kyle were not speaking. Besides a few comments here and there, Kyle has remained relatively private about the current status of her relationship with Kim, but on Tuesday night's episode she gave a glimmer of hope to those rooting for a reconciliation between the two sisters.

At a lunch with Adrienne Maloof (a former RHOBH, who is now in business with her ex-husband Paul), Kyle revealed that she and Kim were reconnecting, albeit slowly. She shares with Adrienne that she and Kim are talking little by little, via texts, and it seems that there is some hopefulness in Kyle's voice that hints that things might be getting better for the sisters.

Obviously this is not an issue that can be solved over night. The two have a sorted history that runs a lot deeper than any of the other drama to ever exist on any Real Housewives franchise. The two have been through a lot together and hopefully there will be a day where they can find solid ground to rebuild their relationship.

Adrienne revealed that she has been speaking with Kim. Although she didn't go into the extent of their current relationship, Adrienne did say that Kim looks fantastic. It's not a lot to go on, but it's something and it's certainly a positive report from Housewives Nation.

Kim shared the above Instagram of her and her sister as children on Kyle's birthday in January. Without reading into it too much, it seems that there's progress being made for the two. This is undoubtedly a hard time for Kim, with the recent loss of her ex-husband Monty, but hopefully it is a time for Kim to be surrounded by those she loves and those that love her. Hopefully, one of those people is Kyle.