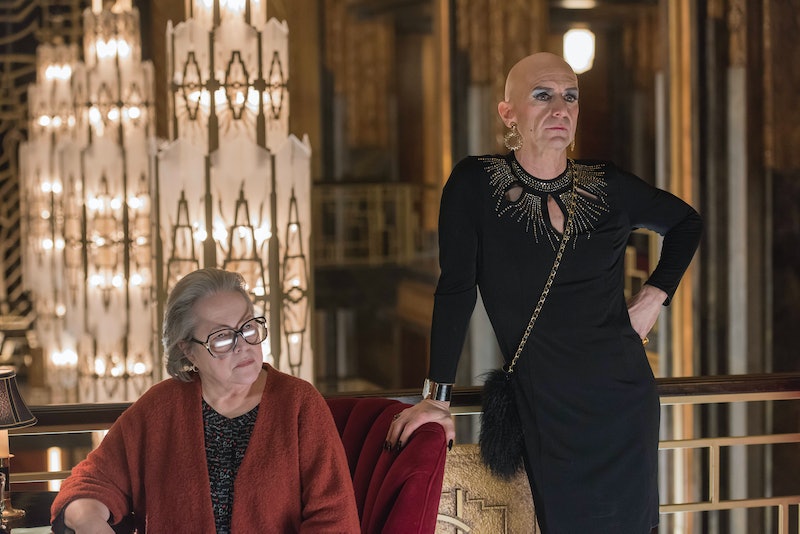 Another season of American Horror Story is on the way, and the question on every fan's mind is: where will Season 6 of AHS take place? Viewers have already seen seasons set inside a murder house, an asylum, a coven, a freak show, and most recently, a hotel — so where can you expect Ryan Murphy's wild ride to go for its sixth installment? Fans online have been comparing notes and scouring the internet and past episodes for clues as to what the future of American Horror Story holds, and these AHS Season 6 concept rumors already out there are pretty intriguing.

The creative crew behind American Horror Story has been dropping plenty of hints about Season 6 lately, with FX President John Landgraf revealing at the TCAs in January that the new season will be “set in the present [with] echoes of the past...It’s set in two time periods,” according to TVLine. Cinematographer Michael Goi has also hinted on Twitter that children will play heavily into the season, and Ryan Murphy himself told the International Business Times in October that "The next thing we’re crafting up is very, very different than this. Not smaller. But just not opulent. More rogue and more dark."

These details are more than enough to encourage some speculation about the upcoming episodes, which is exactly what the internet has been doing. Here are some of the best theories out there about where AHS Season 6 could take place.

Reddit User u/krlong01 suspects that the theme behind the upcoming season could be "Amusement Park", specifically due to a number of references to Disney World hidden throughout Season 5. Considering all the evidence that is presented, as well as Murphy's knack for finding the horror in Earth's most manufactured places, Amusement Park makes a whole lot of sense. As krlong01 writes:

They keep referencing Room 33 and Club 33 is the private club at Disney. Also, the 2 Swedish girls checking in in the first episode wanted to know where Universal Studios was. That studio is used to film some Disney movies, plus Universal Studios was an early distributor of Walt Disney cartoons. Lastly, the final show is titled "Be our Guest." There is a Be Our Guest" restaurant at Disney in Orlando and was in 'Beauty and the Beast.'

There's not a lot of evidence, but it's certainly more than there is for the idea that AHS Season 6 is going to be the "space season."

Possibly the most well-formed theory as to where Season 6 will end up taking place, American Horror Story: Academy has a lot of hints to back it up. Fans noticed that during the finale of AHS: Hotel a distinct boarding school was mentioned twice by characters who were looking to send their children away. Coincidence? There's no such thing in American Horror Story. An academy would be a children-heavy location with a long history (perfect for flashbacks), and would be far less opulent a setting than those of past seasons. AHS: Academy might hit all the right spots for Season 6.

Another popular fan theory, American Horror Story: Summer Camp fits the theme of children, and is a setting that has a long history of murder and horror in pop culture. However, it's looking more and more likely that when Ryan Murphy's other TV horror project Scream Queens returns to television, it will be the show going to Camp, not AHS. So don't get your hopes up for a double dose of camp-flavored mayhem in one year.

Many of the past seasons of American Horror Story have a basis not just in horror, but in history. The Hotel Cortez is based off an actual murder hotel, Freak Show was inspired by real sideshows of the early 20th century, and Coven came from the Salem Witch Trials. Season 6 might very well have basis in the show's history. In a recent interview with The Hollywood Reporter , Murphy said, "This year, with Season 6, it's weird because one idea that I think we're going to do is an idea that we started talking about in Season 1. So, the clue for Season 6 is not just in the material we're doing now; it's from way back in Season 1. We talked a lot about it. There is a clue in there."

One thing that got a quick mention in Season 1 was the slaughter of Native Americans and the story of the Croatoan that Billie Dean told. This relates directly to the myth of the Lost Colony of Roanoke, which would satisfy Murphy's history thirst and is also just super creepy. This may not be the likeliest theory, but it's also one of the most compelling; the only problem is it may be difficult to make the show scarier than the actual truth, i.e. the fact that a bunch of people disappeared hundreds of years ago and no one knows why.

With so many possible theories for the location of Season 6 of American Horror Story, Ryan Murphy should have no problem setting the stage for the upcoming episodes. As more time goes on and more hints are dropped, the ideas are bound to get more detailed and complex, but for now, fans should just relax and think about the idea of Lady Gaga as a sinister Ferris wheel operator, Evan Peters as a cool Eagle Scout, or Sarah Paulson as a pilgrim. How great would that be?