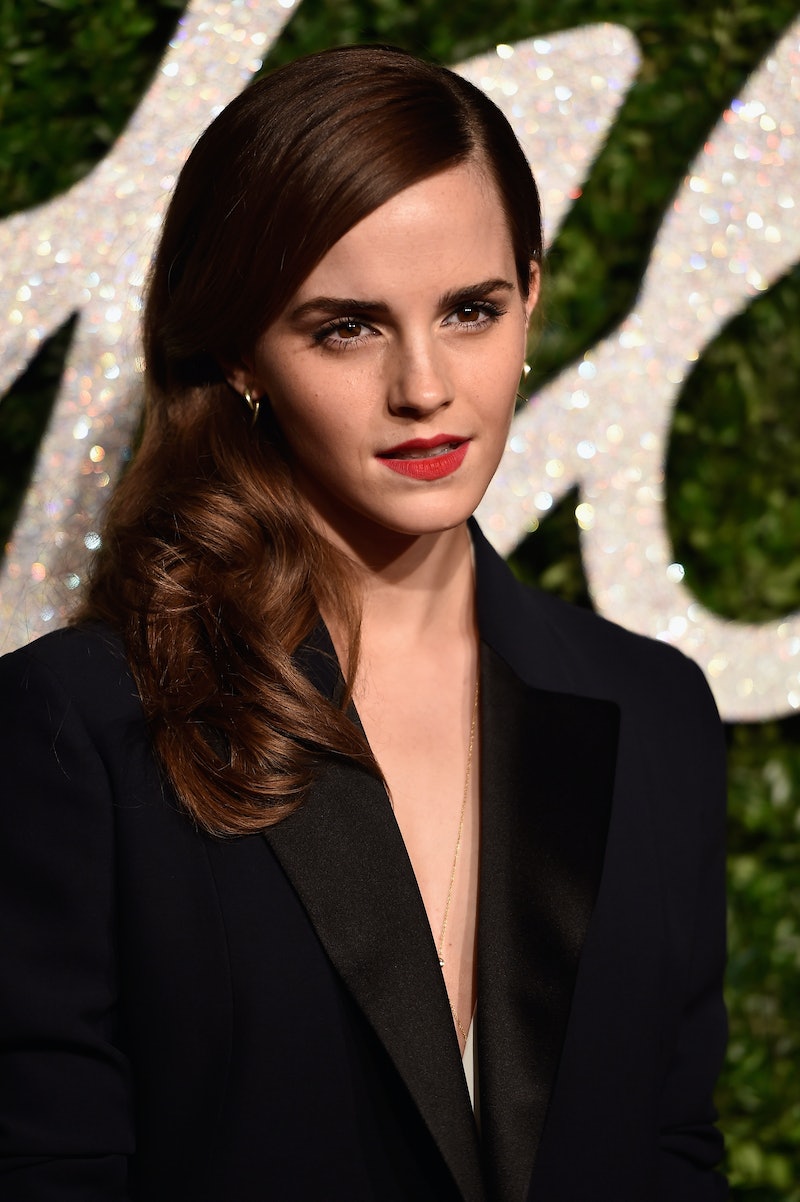 From Rowan Blanchard to Amandla Stenberg, there are so many amazing young feminists in Hollywood, I could cry happy tears. Another noteworthy name that belongs on that list: Emma Watson. The Harry Potter star recently did an interview with bell hooks for Paper magazine — and yes, it was as fantastic as it sounds. In the article, Watson says she's taking a break from acting to focus on something else: her personal journey with feminism. Pretty great, huh? When hooks asks about this year of "activism and self-growth," the 25-year-old says,

I'm taking a year away from acting to focus on two things, really. My own personal development is one. I know that you read a book a day. My own personal task is to read a book a week, and also to read a book a month as part of my book club. I'm doing a huge amount of reading and study just on my own. I almost thought about going and doing a year of gender studies, then I realized that I was learning so much by being on the ground and just speaking with people and doing my reading. That I was learning so much on my own. I actually wanted to keep on the path that I'm on. I'm reading a lot this year, and I want to do a lot of listening.

Just in case that's a lot to take in, here's the TL;DR version that Watson shares later in the interview, "I want to listen to as many different women in the world as I can." The UN Women Goodwill Ambassador has some seriously amazing goals. These are plans that anyone can try to incorporate into the year ahead, even if just in small doses.

Here's a recap of five things that Watson's time off from acting will hopefully entail.

1. Starting The Best Book Club Ever

In January, Watson announced she was starting a feminist book club. She asked her followers to throw names out there and ultimately decided on #OurSharedShelf. Their first book is Gloria Steinem's My Life On The Road.

Not only is it a great way for the star to stick to her goal of one book a week, but it helps her connect with her fans in another way by starting a conversation focused on feminism. If you're interested in joining the discussion, head over to Goodreads.

2. Learning More About Herself

As she says in her interview with hooks, the more Watson embraces feminism, the more she learns to love herself. She says,

What is really liberating and empowering me through being involved in feminism is that for me the biggest liberation has been that so much of the self-critiquing is gone. ... Engaging with feminism, there is this kind of bubble now that goes off in my head where these really negative thoughts about myself hit where I'm able to combat them in a very rational and quick way.

Honestly, that sounds like some awesome progress. She admits that it's not the easiest process, adding, "I see so many women struggling with issues of self-esteem. They know and they hear it and they read it in magazines and books all the time that self-love is really important, but it's really hard to actually do." I'm sure this is also something that she'll continue working on during her year focused on personal growth.

One of Watson's shining moments in 2014 was her speech at the UN, where she broke down what exactly feminism means and why it needs male supporters too. Her current focus is on the wage gap with the help of HeForShe's IMPACT champions. She explains to hooks that this is a group of 10 CEOs who are releasing to the media what their companies look like internally and any plans to improve the wage gap. She recently moderated their event.

As for how she plans to promote the cause, Watson says in the Paper magazine story,

I'll also take another field trip in the next two or three months. We are organizing a HeForShe arts week, a university tour, and launching the HeForShe website. It's a lot. There's a lot to do.

Sure sounds like it! Which leads perfectly into the next point...

Despite these big goals, hooks asks an important question, "When are you going to have any downtime, any fun?" Watson responds by laughing and admitting she sometimes tries to overcompensate and do everything. I sure hope she takes a break to breathe and have fun. Maybe attend a Quidditch match? Perhaps doing some dancing? Whatever she does, she deserves to not be in work mode 100-percent of the time.

In all seriousness, props to Watson for focusing on not only her own growth, but also the movement for equality. Her ambition is beyond admirable and I'm sure Hermoine would be so proud.

More like this
Everything We Know About 'Love Island' 2022 So Far
By Sam Ramsden
Graham Norton’s 10 Best Eurovision Zingers Will Leave You Howling
By El Hunt
At 28, Minnie Driver’s Personal Life Was “Falling Apart”
By Kate Dwyer
16 Novels That Paint A Realistic Portrait Of Abortion
By K.W. Colyard
Get Even More From Bustle — Sign Up For The Newsletter