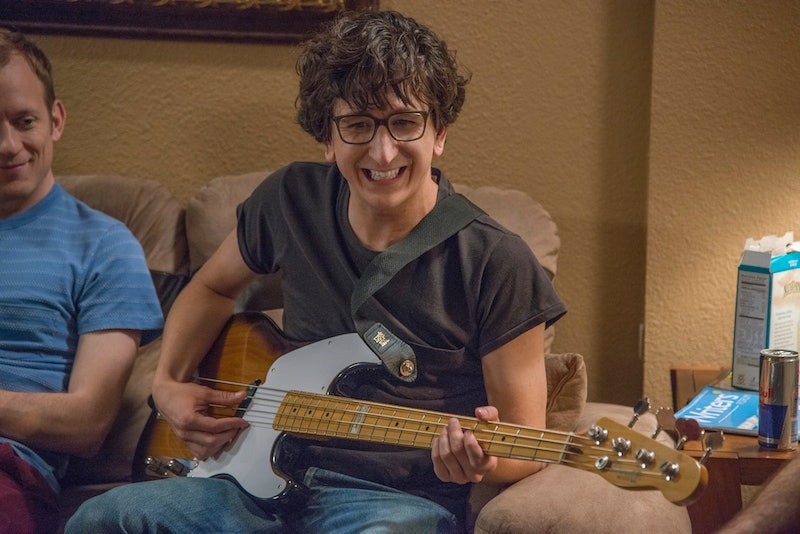 Although Love on Netflix is an unflinching look at the lives of two 30-year-olds trying to figure out their feelings for each other, that doesn't mean that the show from the minds of Judd Apatow, Paul Rust, and Lesley Arfin isn't freakin' hilarious. Creator and star Rust didn't hesitate from putting an amazing amount of pop culture references into Netflix's Love to help cement Gus and Mickey's world as completely relatable. For every fan of books, TV, movies, or music, Love has got some hilarious pop culture commentary for you.

My entertainment-loving self squealed in delight at so many of the references — courtesy of Gus, Mickey, Bertie, and the many supporting characters — during my marathon of the new series. Not only did Love have mind-blowing cameos (my personal favorite: Witches of East End star Mädchen Amick playing none other than a witch in the made-for-Love TV show Witchita), but the show embraced Gus' unabashed love of horror porn and made-up title songs for movies. Mickey and Gus live in Los Angeles and Gus works in the television industry, so any topic that Gus covered dealing with pop culture made complete sense — and was worth the laughs. Here are 17 of the best pop culture references from Love, ranked from good to great.

When Gus had multiple women interested in him, his boss at the TV show Witchita, Susan Cheryl, attempted to put him in his place by saying, "This show is not your personal episode of The Bachelor." Oh, how I'd love to see Chris Harrison say, "Ladies, Gus — this is the final rose tonight. When you're ready."

Mickey admitted she had sex with an "assh*le from Top Chef." Oooh, let the guessing game begin!

15. The Endless World Of Cute Animals On The Internet

The tween actress Gus tutors, Arya, is much younger and hipper than Gus, which she displayed by showing him the best of adorable animal Vines on her cell phone. One of them included this goat saying, "What? What?"

Mickey thought a good book choice for Arya was The Executioner's Song by Norman Mailer, to get the girl into true crime novels. Even more inappropriate was Mickey's assessment about the main character being, "like weirdly sexy."

13. Los Angeles, According To John Candy

When Gus said he thought that Armed and Dangerous was filmed near Mickey's house, she was inspired enough to watch the John Candy and Eugene Levy film.

Mickey claimed that her friends had a terrifying Airbnb experience when they stayed in the house from A Nightmare on Elm Street.

Perhaps I'm still sentimental about David Bowie's death, but I loved when Gus thought Cori and his college friends called him "Major Gus" in honor of Bowie's "Space Oddity" subject Major Tom. Sorry, Gus — it was just about you being annoying.

Bertie was as upset as Cameron in Ferris Bueller's Day Off when Mickey used her to go to the studio where Witchita was filmed to see Gus. In her words, "You know, Ferris Bueller would never do what Mickey did. He was really loyal to his friends. The only ones he ever lied to were the grown-ups." Wise words, Bertie.

Gus sure does love his John Candy. As he explained to Mickey (he was pretty high), Spaceballs "really, like, puts Star Wars in its crosshairs."

8. American Horror Story, According To Arya

Instead of studying on the set of Witchita, Arya was too busy watching American Horror Story: Asylum. The young actress' description of the show's Season 2 didn't beat around the bush, getting right to the most disturbing aspects of the series. Maybe Mickey was right to recommend she read The Executioner's Song.

The Australian Bertie, who was easily the most genuinely hilarious character, tells her and Mickey's neighbor that her book club is reading the book behind Scientology, Dianetics, in order "to see what it's all about." Hey, I'm intrigued as hell too, and she did just move to Los Angeles.

Chris Rock's brother, Jordan Rock, plays Kevin — the caterer on Witchita — and offered Gus sound love advice he didn't always heed. Kevin used one of those moments to mock a trope common in movies: "I'm like that black guy in every movie that comes on and gives his white friend perfect advice." He then referenced the great Dave Chappelle in You've Got Mail.

I first became familiar with Los Angeles' The Magic Castle through Arrested Development's spoof of the place (theirs was "The Gothic Castle"). This quirky landmark got a significant shout-out in Love when Gus took a resistant Mickey there on their first date — complete with a sing-along to Violent Femme's "Blister in the Sun," courtesy of Irma, the piano-playing ghost. The scene even made me realize that there is sexism in the magic community!

In the epic, Game of Thrones-inspired words of Witchita writer Susan Cheryl about surprisingly killing off a character: "Nothing grabs people's attention like just f*cking Ned Stark-ing a character."

3. The Best Blu-Ray Collection Ever

After getting his Blu-rays from his ex-girlfriend, Gus goes on a stoned rant about how all the movies have lied to him about love, even classic like Pretty Woman. (And I agree with Mickey and Gus, Season 3 of Homeland did go off the rails a bit.)

Bertie's passionate love of The Holiday during the studio tour brought tears of pure joy to my eyes. She let her fellow tourgoers know how important The Holiday is with this spot-on synopsis, "Cameron and Kate are two lonely women from opposite sides of the Atlantic, who swap houses and inhibitions in an epic tale of love and laughter." And Jude Law did have rugged charm in this ultimate rom-com.

1. Title Songs For Movies That Don't Have One

By far the greatest pop culture references in all of Love come from Gus' parties with his friends where they write title and closing songs for movies that don't have them. Although I would have loved to hear what his group would have come up with for Sister Act 2, I'll settle for their takes on The Perfect Storm ("Water's looking so darky dark/Riding on a boat with Marky Mark") and Carlito's Way ("It's either Carlito's Way or the Carlito's highway!").

Gus — while I may not always approve of your choices in life and love, please invite me to your next title song party.

More like this
What’s New On Netflix: A Victoria Justice Rom-Com & The Return Of David Letterman
By Arya Roshanian
'Doctor Who’s New Star Is Already Huge On TikTok
By Maxine Harrison
What’s New On Netflix: The Return Of 'Bling Empire' & A Rebel Wilson Comedy
By Arya Roshanian
Will Viewers Revisit Welcome To Eden For Season 2? What To Know
By Kadin Burnett
Get Even More From Bustle — Sign Up For The Newsletter