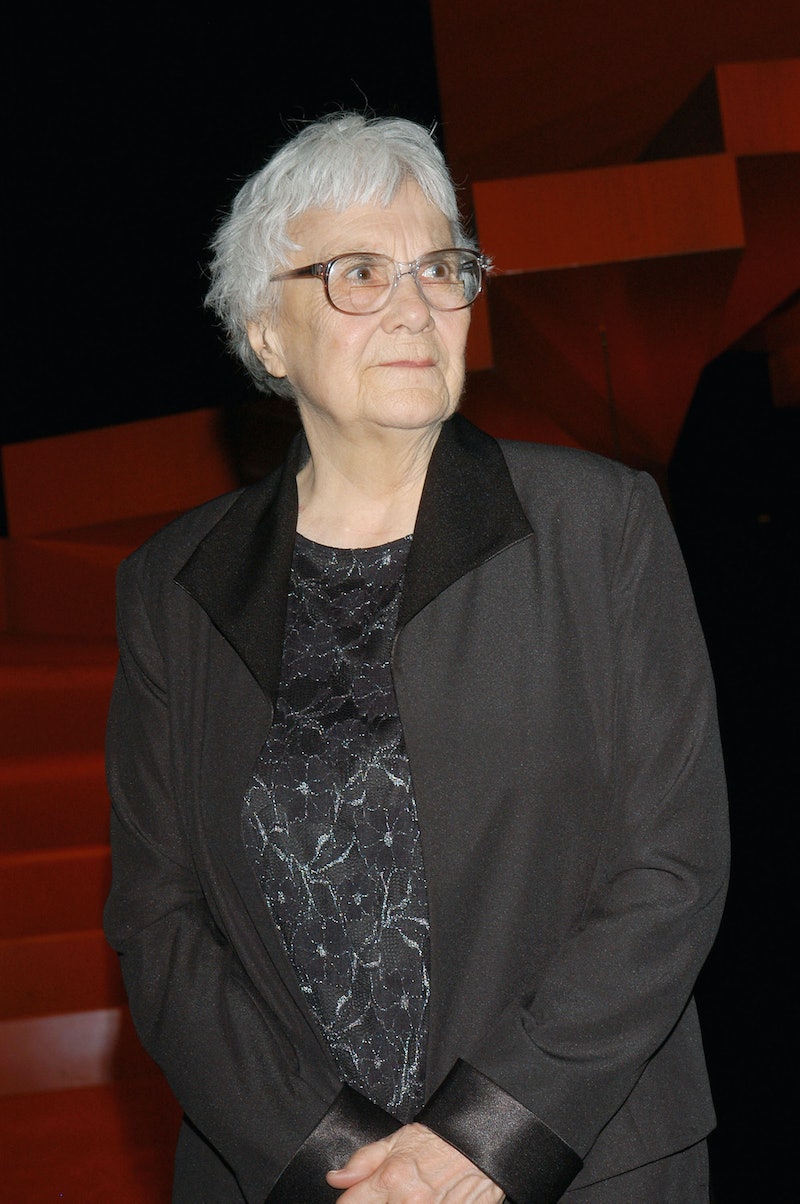 The literary world lost a giant this past week, but at least it seems she's been given the send-off she deserves. Harper Lee's funeral was held on Saturday, and by all accounts it was everything the reclusive author would have wanted. Given the many questions about whether the people around Lee were truly acting according to her wishes during the final years of her life, it's comforting to know that she was laid to rest as requested.

Since news of Lee's death at the age of 89 broke on Friday, people from readers to fellow authors to celebrities to the president himself have been paying tribute to the author of To Kill A Mockingbird. From sharing memorable quotes from Lee to re-watching the To Kill A Mockingbird movie to reflecting on what her work has meant to them, people everywhere have made it very clear just how beloved Harper Lee was. Her funeral, however, was a quiet and private affair without throngs of fans or press, which is what Lee wanted.

The funeral was held at the First United Methodist Church in Monroeville, Alabama, the small town where Harper Lee grew up and spent most of her life after withdrawing from the public eye not long after Mockingbird was published.

Details of the service are sparse, the people close to Lee protecting her privacy. The eulogy was reportedly delivered by Lee's long-time friend, history professor Wayne Flynt, and the remarks were ones Lee herself chose. After Flynt delivered a speech honoring Lee in 2006 entitled "Atticus Inside Ourselves," Lee apparently liked it so much that she told him she wanted it delivered, word for word, as her eulogy. In a past interview, Flynt said, "If I deviated one degree, I would hear this great booming voice from heaven, and it wouldn’t be God.”

After the service, Lee was buried in a local cemetery with her parents and her sister.

Ever since the announcement last year that another novel by Lee would be released, people have questioned whether or not the aging author had really agreed to the publication of Go Set A Watchman. Certainly the timing was suspect — after decades of maintaining that she wouldn't publish another book, Lee supposedly agreed to publish a new novel not long after the death of her sister, who had handled her legal affairs. And many who knew her maintained that after suffering a stroke several years previous, Lee did not have the mental faculties to consent to a book deal.

The state of Alabama investigated claims of elder abuse in regards to the case but ruled the author was not being taken advantage of. Questions, however, continued.

Whatever the truth regarding the publication of Go Set A Watchman however, or whether Lee's wishes were carried out in her final years, it is comforting to know that she was laid to rest exactly as she wished. The funeral was attended by a few dozen people who were part of Lee's intimate circle, and every effort seems to have been made to respect her privacy and her wishes.