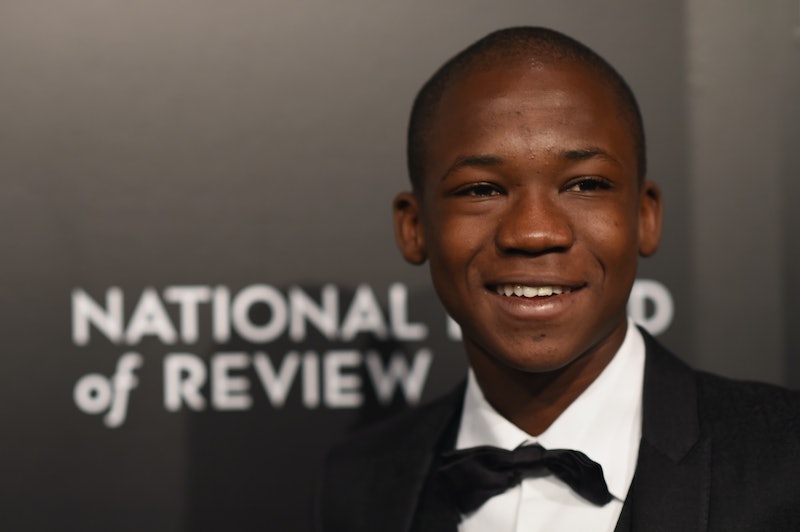 The Oscars are finally here, and this year's show is already looking like it'll be fantastic. The competition is fierce across pretty much every category, Chris Rock will be hosting, and there's also a sizable list of celebrities who will be presenting awards. Some of the names are super recognizable — for example, Lady Gaga, Ryan Gosling, and Tina Fey — while others may not seem immediately familiar. One such lesser-known name is nestled comfortably on the alphabetical Oscar presenter list between Patricia Arquette and Cate Blanchett, and it's clear he's a big enough star to warrant an invitation to the show — but just who is Abraham Attah?

The young actor's face may be in your recent memory if you saw Beasts of No Nation in late 2015. Attah played Agu, a young boy in a war-torn West African country who falls into the violent world of child-led warfare. Attah, who was just 14 when the film was released, received high praise for his performance as Agu, and some even speculated that he could get an Oscar nomination. Although this did not end up being the case, Attah still earned the honor of being a presenter at the Academy Awards. Here are some of the other 2016 Oscar presenters whose names you might not know— and why you should learn them.

Although he's not a household name in America, Lee Byung-hun is well-known in his home country of Korea. His fame in the US film industry is rising, though; he appeared in Terminator Genisys and has roles in two American-made films in 2016, Misconduct and The Magnificent Seven.

It's doubtful that you're unfamiliar with her face — those Star Wars ads were everywhere — but perhaps you don't yet know her name. Get learning, though, because this British 23-year-old was catapulted into sudden fame after being cast as Rey in Star Wars: The Force Awakens.

Older generations might be quicker to immediately recognize this actor, who has been working in film since 1961. He won the Academy Award for Best Supporting Actor for 1982's An Officer and A Gentleman, and an Emmy for his role in the TV miniseries Roots .

This Indian-born actor has appeared in dozens of Bollywood films and is now the star of Quantico on ABC. She is also a former beauty queen, having won the Miss World pageant in 2000.

You know this actor even if you don't think you do. Serkis is known for his variety of motion-capture roles, including Gollum in the Lord of the Rings series and Caesar in the Planet of the Apes series. His most recent role in a major motion picture was Supreme Leader Snoke in The Force Awakens.

If this name sounds familiar, it's because the nine-year-old actor is on the rise after his breakout performance as Jack in Room. And it doesn't appear that Tremblay will be going away anytime soon; he has multiple other films scheduled for 2016.

Some of this year's Oscar presenters may not all be as widely known as Morgan Freeman and Whoopi Goldberg, but they're no slumps, either. A few are rising stars like Attah, while others are established performers with long-standing careers, and even more are stars in foreign markets. But one thing is for sure: if these actors' presenting games are as strong as their on-screen performances, it's going to be an amazing show.