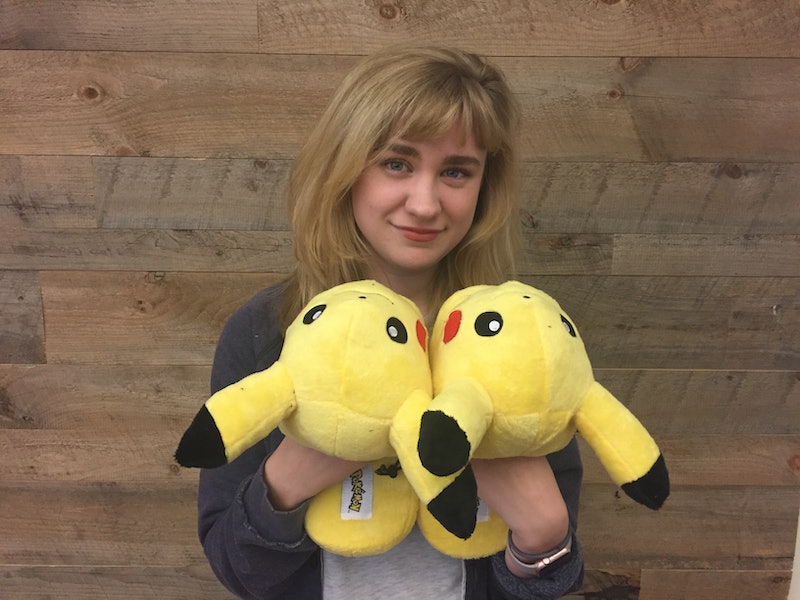 I've been made fun of for casually dropping the word "microgeneration" in conversations, but guys, the concept is so real. For instance, I'm decidedly a Millennial. I was alive and present for 9.5 years of the '90s. But consider, for a moment, that Millennials encapsulate an entire generation born from the early '80s to the early 2000s. That's 20 plus years of shifting culture, of technological booms, of hair deflating and reflating and deflating again. It's impossible, really, to put Millennials in a group and imply that they have shared experiences, because as someone born in 1991, I have radically different experiences of the '90s from friends of mine who were born in 1990, let alone friends born in the early '80s.

Which brings me to the bone I have to pick with my birth year today: '90s nostalgia. Listen, '90s kids. I want to be a part of your squad so bad. I want to understand what it means when I show up to work in a crop top and my coworker tells me I'm dressed like a "fly girl". I want to be able to break into Salt-N-Pepa's dance moves for "Push It" with my BFF from muscle memory. I want to understand why the hell everyone is still obsessed with some dude called Jonathon Taylor Thomas. I was there, dammit. These should be shared experiences. But a few years — nay, even a few months — can make all the difference in how you experienced the '90s, whether you were there for them or not. If you also happened to be born in the early '90s and are only just now realizing that you missed the height of them, then you will relate to the following all too well:

You Have One Three Way Calling Story, And It's Really Lame

Naomi and Raquel called me to get the fifth grade homework assignment. There. That's it. That's the one time I used three-way calling, arguably Snapchat of the '90s, and already you are bored to tears.

You Were Too Dumb To Sneak Watch The Quality '90s Television

The cool '90s kids were craftily watching Dawson's Creek and Sex and the City reruns when their parents were out — in the meantime, the microgeneration a year beneath them had no idea what the hell a Carrie Bradshaw was, and was still being subjected to Rugrats.

You Were Way More Terrified Of Cell Phones Than Everyone Else

While true '90s kids were tossing their pagers away, ready to embrace the majesty of the shiny pink Razor, the babies on the sidelines were mortally terrified of losing or harming it and invoking our parents' well-deserved wrath. WHO COULD HANDLE THE BURDEN OF THAT RESPONSIBILITY??

Your older, savvier friends who had amassed collections were bound to be Beanie Baby millionaires, while you sat around trying to make your Princess Diana Bear and Prayer Bear look less lonely chilling together on your shelf.

You Suffered The Worst Parts Of '90s Fashion

Everyone else remembers the '90s for its scrunchies and mood rings and bucket hats. The kids who missed the height of it, however, remember nothing but infinity wedgies from their bright pastel Talbot's Kids leggings.

When Lindsay Lohan was gushing over Leonardo DiCaprio in The Parent Trap, you were like, "Uh, does she mean the painter?" (#TrueStory.)

You Were Pretty Much Raised On Cartoon Network

Because you were in that "not a girl, not yet a woman" awkward spot of '90s kids, instead of watching Gilmore Girls with your slightly older, cooler peers, you were watching Sailor Moon and Dragon Ball Z reruns on Toonami after school and unwittingly sentencing yourself to a lifetime of utter, unrepentant dorkery.

By the time you caught on to that whole Spice Girls thing, they were hella breaking up. And you would proceed to spend the next decade of your life sing-mumbling the words to "Wannabe" and praying nobody at summer camp caught onto the fact that you were just indiscriminately saying "zig a zig" over and over again.

You have hazy memories of the Lewinsky scandal, of Princess Diana's death, of the O.J. Simpson verdict — all of them punctuated by adults around you getting worked up while you sipped on a Capri-Sun wondering what the hell the big deal was. Pfft, history.

The true '90s kids quickly harnessed the power of MySpace and LiveJournal angstily followed their bliss. You, however, suffered in the aftermath when all of those "THE INTERNET IS WRECKING THIS GENERATION" headlines started scaring the pants off your parents, and then the closest you could get to an AOL chatroom was playing games on Neopets.

You Had The Worst Pick Of The AOL Usernames

By virtue of being a few years younger than the real '90s babies, you got stuck with their dregs. Love from dolphinrider1991XoxoxoOXO, you punks.

You Believed Literally Everything Anyone Said To You About Y2K

The older '90s kids were scared ironically and had end-of-the-world themed slumber parties. You, on the other hand, were playing apocalypse with your Barbies and asking your mom how long your cans of Spaghettios would last after the world spontaneously combusted the moment the clock struck midnight. Glad to see we're all still here, y'all.

More like this
Starbucks’ Chocolate Cream Cold Brew Tastes Like This Retro Candy
By Emma Garza
When Did Tamagotchi Come Out? In The U.S., 25 Years Ago
By Kaitlyn Wylde
4 Zodiac Signs Most Likely To Be “That Girl”
By Kristine Fellizar
3 Most Charming Zodiac Signs, According To Astrologers
By Kristine Fellizar
Get Even More From Bustle — Sign Up For The Newsletter