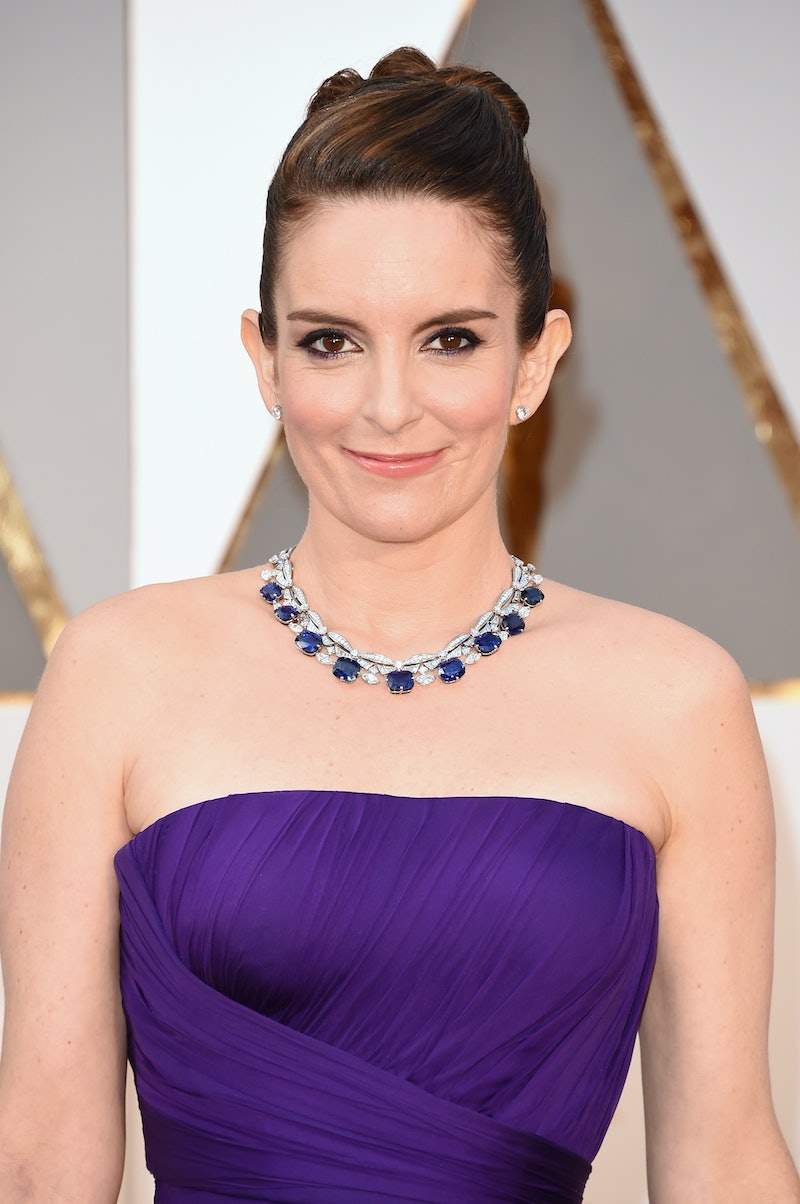 Spotted without her partner in crime Amy Poehler, Tina Fey showed up at the 2016 Oscars wearing a form-fitting strapless purple gown and matching necklace. And even though Fey and Poehler are not hosting the Oscars this year, much to the chagrin of everyone who enjoyed their shared stint as Golden Globes co-hosts for three years in a row (which was pretty much everyone), Fey is scheduled to present an award at this year's ceremony alongside Steve Carell, and she is definitely dressed to impress the Academy.

In an interview with ABC on the red carpet tonight, Fey was asked if she had any advice for this year's host Chris Rock since she has been such a successful awards show host in the past. She simply complimented Rock, saying, "Chris Rock needs no advice from me because he is the greatest living stand-up comedian.” And given all of the controversy around #OscarsSoWhite, Fey expressed her support for Rock as the perfect host to address the issues. "There’s no one I trust more to try to get humor out of it than Chris," she said on ABC.

Fey is a funny person in her own right though, and over the last few years, she's seamlessly made the transition from the small screen to bonafide movie star, and with this look, she's proving that she's also got the fashion chops to back it up.

This strapless purple gown is fairly simple, but the delightful draping around the bust and a slight flare at the hem add a bit of volume and glam. Her accessories were minimal but made an impact, with a single statement necklace of diamonds and navy gems, likely sapphires, that complimented the dress without seeming too matchy-matchy.

She finished the look off with a sleek updo that showed off that necklace and complimentary diamond stud earrings. It's not the most experimental look, which is a bit disappointing given some of more daring dresses she's worn recently while promoting her movie Sisters with Poehler, but it's gorgeous and there's no denying that Tina looks like a movie star who's totally at home at the Oscars.

More like this
Amanda Seyfried Reflects On 'Mean Girls' & "Gross" Remarks That Men Made After It
By Jake Viswanath
Remember When Benedict Cumberbatch Announced His Engagement In A Newspaper Ad?
By Hugh McIntyre
Tom Cruise Gives His Honest Review Of Lady Gaga’s New Song For 'Top Gun: Maverick'
By Hugh McIntyre
Machine Gun Kelly Wore A $30K Diamond Mani To The BBMAs
By Paris Giles
Get Even More From Bustle — Sign Up For The Newsletter