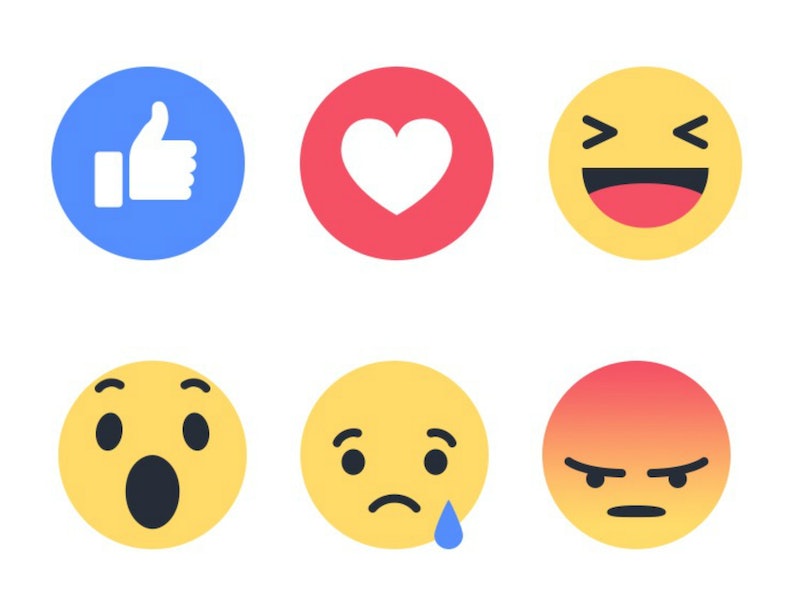 If you haven't logged into Facebook yet today, now is the time to do so because Facebook Reactions are here! Now, you might be wondering: what are Facebook Reactions, anyway? Basically, they're an upgrade of our ability to "like" posts. Now, in addition to the "like" button (which still appears as a thumbs up), users have five new options: "Love," "Haha," "Wow," "Sad," and "Angry." These buttons are as user-friendly as the original "like" button, too. If you're a mobile user, you hold down the "like" button until the new ones appear; meanwhile, if you're on a computer, simply hover your cursor over the "like" button to bring up the reaction options.

You may remember that Facebook did a limited launch a limited test of these options back in October 201 for users in Spain, Ireland, Chile, and the Philippines, at which time people were surprised to discover that the feature wasn't a "dislike" button. The "dislike" button still doesn't exist, but I have to say, I think these extended options are pretty neat. According to Facebook's Newsroom, the company conducted global focus groups and surveys to determine which reactions users had the most interest in. They also looked at which emoticons and stickers people used in response to post types on their feed in order to determine which reactions would be the most useful.

Because I'm a data nerd, I was kind of hoping this meant we'd see some data on which reactions were the most used during the testing period. This data hasn't been released to the public (yet!), but we can still extrapolate from the options themselves about when each reaction will be most useful. Here are five ways you might think about putting Facebook Reactions into practice.

This one, of course, is going to absolutely blow up when Facebook announces a new relationship, engagement, or wedding. I also predict this one coming in handy for when people post new profile pictures or selfies with celebrities or politicians. You know, the Big Deal moments of Facebook.

The laughing reaction is definitely going to get a lot of mileage for viral videos and GIFs of people falling down. That's inevitable. I also predict that when people post witty statuses, they'll soon be lusting after getting a lot of "haha" likes in addition to regular likes, though. Hopefully people don't use it when the rare-but-cringeworthy relationship status changes back to "single," though. That's just mean.

Now, I'm of the opinion that social media isn't necessarily the best form of communication for all topics. If, for example, someone posts to Facebook about the death of a family member or loved one, I can already see numerous people hitting "sad" on said status. In and of itself, this isn't a bad thing; however, I personally hope that when things are actually sad and serious (like death, losing a job, illness, etc,), people also reach out to one another in more tangible ways, instead of communicating solely through emoji and Facebook Reactions.

I predict this reaction will get a lot of use immediately after Donald Trump says, well, pretty much anything. Actually, I can see this one being in frequent use when it comes to political posts in general during election season. A "Wow" reaction has the potential to convey genuine surprise or shock, as well as a slight side-eye for when you're judging a Facebook friend's thoughts on the down-low.

The discussion of "Wow" brings us here pretty easily. Ideally, I think the "Angry" Reaction will be used when people are angry on behalf of their friends. In reality, I can see it being used when people simply disagree with one another's statuses, and if that's the case, I'm curious to see if hitting the "angry" reaction causes an increase or decrease in fights on Facebook.

All in all, I'm pretty excited to see how the usage of Facebook's Reactions turns out. I predict if they get a lot of mileage, Facebook will consider adding even more options which is always a cool feature. After all, we spend a lot of time on social media, so it never hurts to have another way to express yourself.