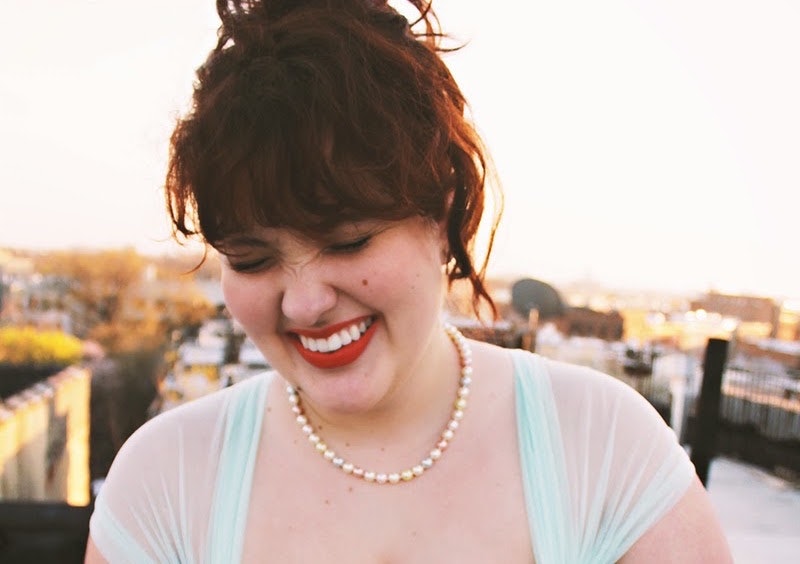 There's this misconception surrounding body positivity that implies the movement is about making all humans believe that all bodies are beautiful and about making all humans believe all styles look beautiful on them. While these are noble causes, no doubt, they also pose a bit of a problem because human beings have preferences. This is why, in actuality, most body positive activists seem to know that no matter how many photos we put into the world of women with body hair or of fat figures in form-fitting horizontal stripes, not everyone is going to think everyone else is beautiful. Not everyone is going to feel 100 percent themselves in every single style of clothing the planet has to offer. And that's OK.

The simple truth is that our perceptions of beauty are entirely our own. Our perceptions of personal style just the same. It's similar to how some of us love pineapple pizza, while others think it's sacrilegious. Or why some of us will opt for an androgynous look, while others don't feel at home in their bods unless they're sporting a tutu. So I would argue that we should be focusing on helping people understand that, yes, they have a right to their opinions. They just shouldn't be imposing those opinions onto others or presenting them as facts.

You see, there's a difference between having an opinion and shoving said opinion down someone else's throat. While I'm thrilled to be talking about the importance of political correctness and respect for the choices of others, I sometimes can't help but feel that we're taking things too far. We seem to have reached this point where some of us don't feel comfortable admitting that we don't like bodycon dresses for fear of it making us seem "anti body positive." Sometimes we might even be afraid of complimenting our friends, just in case they take it as a backhanded compliment, or, conversely, making innocent jokes about our distaste for one friend's grandpa sweater because we don't want to come across as insulting or cruel.

Common mantras in the body pos movement are thinks like, "Every body is beautiful," or, "Every body is a good body." These things are definitely true, in the sense that all bodies are in possession of their own unique beauty (both externally and internally), and all bodies are worthy of self-respect, self-love, and self-fulfillment. However, what this doesn't mean it that we're all suddenly going to find all kinds of people and all kinds of styles beautiful. The human psyche — and our obviously subjective views — just doesn't work that way.

In June 2014, blogger Nathan Biberdorf penned an article called "Not Everyone Is Beautiful." It was a response to the aforementioned tropes of body positivity, and in it, he honestly made a lot of good points about our obsession with "beauty" in the Hollywood kind of sense of the word. His goal was to convey that "not everyone can be beautiful, just like not everyone can climb Everest or play saxophone or be a good kisser." While Biberdorf likely had noble intentions, the article sparked a lot of controversy from people who felt that he was invalidating the efforts of the body pos movement.

In her response to his article, BUST writer Mary Rockcastle wrote:

The point Biberdorf is trying to make is an important one: It’s important in our capitalistic society that we still all strive to be beautiful in order to keep buying products that promise beauty. Biberdorf says that if we all just screw the concept of beauty then these companies can fuck off and we won’t need them.

Yeah, I get it. But I also think that the complete opposite can be true. If everyone already believes they’re beautiful, then we also won’t feel the need to participate in the beauty industry.

She goes on to add, "Being beautiful is more than just about your face’s symmetry. Being beautiful is about the way your nose crinkles up when you laugh or the way you play the cello. Beauty is the cumulation of the way people see you, not just from the outside but also through everything they associate with you as a person."

When talking about our preferences, a further complication arises when we presume our opinions to be fact. Though you might not personally be attracted to fat bodies, saying something like, "Fat isn't beautiful," is purely a lie. Senior Lecturer in Philosophy at Deakin University Patrick Stokes wrote on IFL Science, "Plato distinguished between opinion or common belief (doxa) and certain knowledge, and that’s still a workable distinction today: Unlike '1+1=2' or 'there are no square circles,' an opinion has a degree of subjectivity and uncertainty to it."

It's a simple premise. There's a clear difference between fact and opinion. Expressing an opinion, in and of itself, should be allowed, right? Presenting that personal opinion as fact, on the other hand... Not so much.

It feels especially important to me to distinguish between having an opinion and forcing said opinion onto someone else when it comes to relationships. For example, a partner who tries to dictate whether or not you shave, whether you wear low-rise or high-rise jeans, how much you weigh, or whether or not you put on makeup, is likely trying to control you in a very unhealthy way. But there's a difference between trying to exert control and simply stating a personal preference.

Personally, I think my partner looks more handsome with a beard than without. I like when he wears sweaters more than I like when he wears hoodies. If you asked him, he'd likely tell you that he hates this one orange dress I own because it looks "like a grandmother's couch." When I don't shave for a while, he might muse that he likes the underarm hair, but not so much the leg hair. This doesn't mean that I demand he throw away all his hoodies. Nor does it mean he's demanding I shave my legs. It doesn't mean either of us is imposing or forcing those preferences onto the other. It just means we both have preferences — styles we like to see the other sporting over others, just as we have styles we'd rather sport ourselves over others. This, I don't believe, is cause for concern.

What is cause for concern, IMO, is allowing mainstream preferences and perceptions to alter your own. Do you hate bodycon dresses because you've been taught that showing off your visible belly outline is not OK? Or do you hate them because you just feel more comfortable in something that isn't so tight to the body? Are you dissing your friend's grandma sweater because it's just not your cup of tea? Or is it because you fear styles that make you/your friend look like an old lady? Our media consumption undoubtedly influences our perceptions of beauty, but we can change that. When we begin to separate our opinions from those of strangers, we begin to identify what we like and don't like for ourselves and no one else.

Bottom line? People are opinionated things. This can manifest itself in whether we opt for iced coffee or hot, booties or knee-highs, stripes or polka dots, brunette hair or red. And I think it's pretty safe to say that if we all liked the same things, the world would be a pretty boring place, no?

We shouldn't be scared of having opinions, because it's our opinions that make us individuals. What we should do, instead, is make sure that we find ways of discussing our preferences openly without shoving them down anyone else's psyche. That, IMO, is a way to ensure the simultaneous progress of diversity and acceptance.