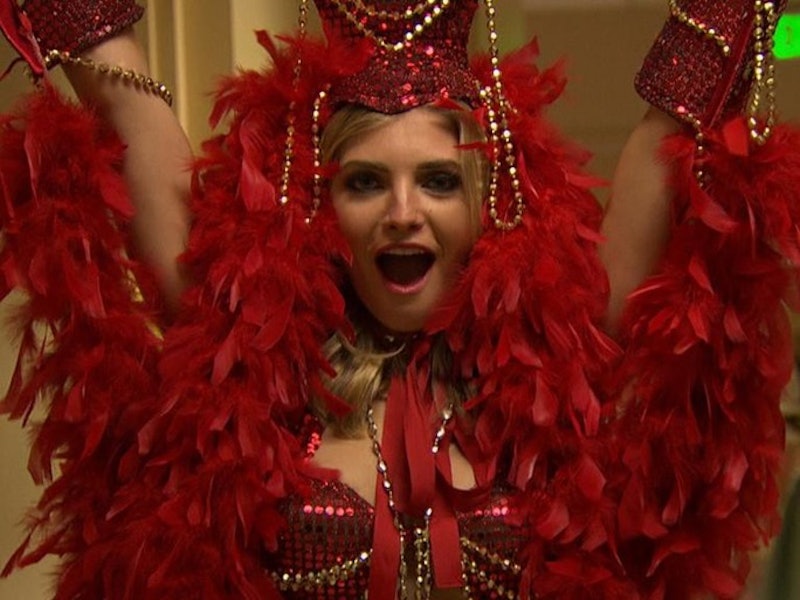 It's crazy to think that Season 20 of The Bachelor is coming to a close. It's been a wild ride, my friends. Even though the show has been on the air forever, ever single season is different and full of its own unique twists and turns. It is not even isn't over yet — and we're just getting to fantasy suites! — but there have been a lot of shocking moments on this season of The Bachelor so far. I don't know how Ben Higgins was able to to navigate through the journey given everything he saw go down.

The surprising moments this season came from ladies thinking outside the box with entertaining limo arrivals, two of the women being contestants from previous seasons of The Bachelor, and two of the ladies being twins. Then there was one woman who brought the awkwardness on the first night. And of course, this season's "villain" Olivia Caridi sent multiple shockwaves through the house. From ridiculous quotes, to love confessions, to regrettable insults, there were a lot of great soundbites this season on The Bachelor, too. The cameras captured and showed a lot of crazy scenes. And when it all comes down to it, this show revolves around the eliminations. And there were plenty of game changing decisions before and after the rose ceremonies.

Here are most shocking moments of The Bachelor as we head into fantasy suite dates.

1. JoJo Showing Up In A Unicorn Mask

This was just such a weird idea, yet JoJo actually pulled it off (somehow). I thought she was going home on the first night with this one, but it turns out that wearing a unicorn mask is a great way to break the ice and form a romantic connection with someone. I don't know what's more shocking, JoJo wearing the mask or that she wore it and made it so far in the competition.

This was just a lot to handle for both Ben and the viewers. When the two Emily and Haley arrived to meet Ben it was pretty surprising to see identical twins competing on the show. On top of that, their occupation was just listed as "twin," which made me wonder what their deal really was. The whole thing was just really weird and no one could really tell them apart, except for the fact that Haley had a cast on her hand.

Sure, this wasn't the first time that past contestants returned to the franchise — cough, cough Nick Viall — but it was still pretty surprising.Amber didn't last super long on her previous Bachelor stint, but went on to join Bachelor in Paradise. And then there was Becca who made it all the way to the end and just came up short during Chris Soules' season. It was crazy to see her back in the competition again. No one knew what to expect from that time on.

Lace was a gem and a half. She always brought the entertainment and ended up being a pretty lovable character. It was just so strange when she got a rose from Ben on the first night, but still wasn't happy about it because she didn't think he gave her eye contact during the ceremony. She even pulled him aside to address her concerns. And the even weirder thing was she still stayed in the house for another elimination after that.

This was just such an awkward moment. Ben referring to Caila as a "sex panther" during their alone time was just so random. It felt so awkward to hear it from Ben's mouth. And it just didn't seem to describe Caila at all. Nevertheless, the strange compliment was instantly quotable and will never die.

Fans were really living for Lace. It was obvious that she was never going to make it to the end, but it seemed like she really relished her time in the house and on the show. It was pretty shocking and mature of Lace to eliminate herself so she could focus on self improvement before dating.

Ben was pretty shaken up after he found out that two of his family friends had died. Olivia tried to comfort him and actually dared to compare his pain to her struggle with having cankles. Who does that?

Jubilee was one of the realest contestants. She was very open and had a lot of substance. Still, the competition seemed to be pretty rough for her to handle. Instead of sending her home during a rose ceremony, Ben broke up with Jubilee on the middle of a group date. Damn. He said he was just trying to be honest with her about their lack of connection, but it was still pretty surprising.

9. Olivia Jumping Out Of A Cake

This was one of the most awkward things I've ever seen. Olivia didn't really dance or do burlesque. She just looked absolutely terrified while she tried to make up a talent show routine on the spot. In a way, it even humanized her a little bit when the viewers saw such a confident woman break down after the performance.

10. Leah Throwing Lauren B. Under The Bus

Whenever Ben said "Leah" during the rose ceremonies, I had no idea who he was talking about. This girl got pretty much no screen time and I couldn't recognize her from a lineup. This all changed when she decided to act on her jealousy of Lauren B. and lie to Ben about Lauren being different with him than she was with the rest of the women. Leah went out of her way to tell blatant lies and she even went to Ben's room to tell more. Ben reacted by sending her home immediately instead of waiting for the rose ceremony. Karma.

Olivia rubbed everyone the wrong way, but she wasn't really mean — she just was super competitive, very cocky, and extremely territorial — but this changed when she decided to compare young mother Amanda Stanton's life to the show Teen Mom. The ignorant comment made Amanda cry, and on top of that, it also offended all of the other contestants.

12. Ben Stopping A Rose Ceremony To Talk To Olivia

After Ben heard that none of the girls liked Olivia, he was concerned that he was being fooled by her charms. He decided to have a talk with her, even though she already had a rose from a recent date. Everyone was wondering if he would send Olivia home and take her rose back. Sadly, this did not happen, but the moment definitely brought a lot of drama and suspense.

13. Haley Getting Dumped At Home In Front Of Her Mom

Ben (just like the rest of us) was having trouble telling twins Emily and Haley apart, so he decided to take them on a two-on-one date to meet their mother. Then he asked the mom who he should dump, took her advice, and sent Haley home in front of her. He had to separate the twins eventually, but it was still a lot for viewers to handle.

Ben did not seem to have a strong connection with Haley, but he was also so confused about Olivia. He had no idea if the girls had valid reasons for hating her or they were just jealous. Ben was on a two-on-one date with Emily and Olivia and he had to send one of them home before the rose ceremony. Everyone thought he would keep Olivia since they objectively did have a bond, but he sent her home, crushed her, and shocked us all.

15. Ben Sending Emily Home After Introducing Her To His Parents

If you think about it, Emily really had all of the worst dates this season. Aside from being pit against her own twin and battling Olivia, she had the challenge of meeting Ben's parents before everyone else. At first she was elated by the honor, but it was so clear that Mr. and Mrs. Higgins were not feeling Emily at all and Ben sent her home before the rose ceremony while all the other contestants watched through the window. Then, she went back in the house and cried on the other girls' shoulders. I don't know about you, but aside from the timing of the elimination, I found it very odd that she was being comforted by her competition, but whatever this is The Bachelor.

16. Becca Breaking Down After Her Elimination

It was sad that Becca didn't get a ton of time alone with Ben to establish a deeper connection, but she did ask him not to blindside her at elimination if he knew she was going home. So when Ben did send her home, Becca was taken aback and embarrassed. She confronted him about his lack of warning and cried in the limo about being unlovable. Becca always has it together, so it was tough seeing the queen so upset.

17. JoJo's Ex-Boyfriend Sending Her A Letter

When JoJo got to her place for hometown dates, she was pretty excited to read a letter from Ben. However, it actually wasn't a letter from the Bachelor at all and instead was a note from her most recent ex-boyfriend asking her to get back together him. JoJo cried, call him to let him know it was over, and told Ben exactly what happened. She handled it very well, but it definitely caused a lot of drama and created some doubts for Ben when she started to explain the situation.

Ben is the nicest guy on the planet. The man couldn't hurt a fly if he tried, so it was pretty crazy to see JoJo's brothers straight up hating on him. They grilled him, questioned his motives, and did everything possible to get him away from their sister. No matter what he said or did, Ben had no chance when it came to turning that situation around.

19. Amanda Getting Eliminated After Hometown Dates

This was so heart breaking to watch. After Amanda introduced Ben to her two young daughters and parents, Ben decided that she wasn't the one for him. She made it clear that a man meeting her children was a big deal for her and she wasn't going to let that happen unless she was sure it was the right move. So it was pretty tough to see her get sent home after that. Then she called Ben out for making her come back for eliminations instead of just letting her go while she was already at home with her children. Poor Amanda.

This season of The Bachelor has been pretty crazy so far and based on the previews I've seen, the shocks are far from over. It will be interesting to see what else can top these 19 surprising moments, but I am so ready for it.

More like this
Becca Tilley Confirmed Her & Hayley Kiyoko’s 4-Year Romance With A Heartfelt Note
By Brad Witter
When Was 'Bling Empire' Season 2 Filmed?
By Alyssa Lapid
Gillian Teased A Surprising Ending In 'Temptation Island' Season 4
By Kadin Burnett
Everything To Know About 'RHONJ' Season 13
By Brad Witter
Get Even More From Bustle — Sign Up For The Newsletter