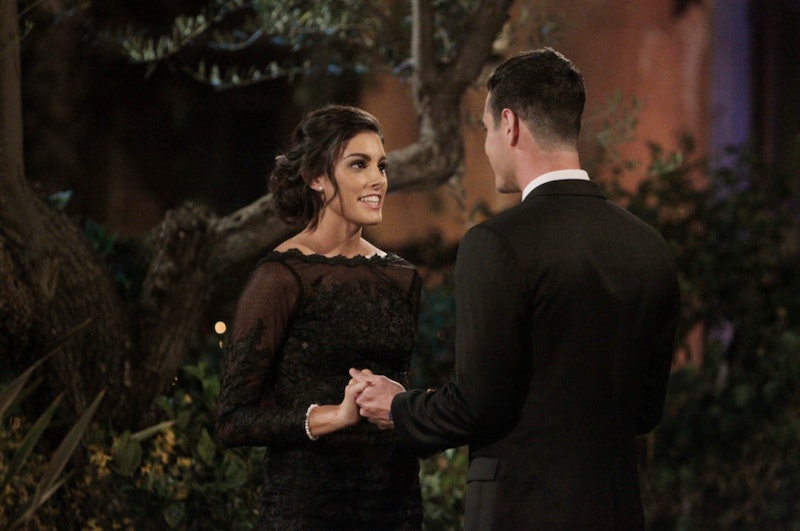 We all say silly things from time to time and there's nothing wrong with that. Luckily, our ridiculous sentiments usually just fade away into oblivion. The same cannot be said for people on reality television. Whatever they say is captured on video, turned into Internet memes, and continually quoted. Case in point, this season of The Bachelor has too many good quotes to count even though we are still in the middle of the season. From the intentionally hilarious lines to the jokes that didn't land to the word vomit that the ladies wish they could take back, there have been some great gems right from the beginning. Let's take a look at the best quotes so far from Ben Higgins' season of The Bachelor .

To be clear, by "best" I don't necessarily mean that these are the most insightful words ever uttered. The quotes below include the embarrassing things said, the thoughts that make no sense, the weirdest one-liners, and most importantly, the most entertaining moments. Hopefully, there are no hard feelings when we rehash these quotes. You know what they say though, "all publicity is good publicity," so I have a feeling that anyone who would date on reality TV show has no qualms about really putting herself out there.

Lace Morris really turned out to be a complete gem. No one appreciated her until she was gone. She just had the best take on every situation and this quote is everything to me. It was almost happening and she was so sure of it!

2. "I'm at an unfair advantage because I've stalked you online for the last two months."

This was a pretty awkward thing for Lauren Russell to say when she first met Ben. We all know that it's true and that every contestant probably did this, but it was still a little much to hear out loud. Lauren R. got eliminated on night one, so future contestants, take note.

3. "I have never been this turned on in a high school before."

I felt so uncomfortable after JoJo Fletcher uttered this sentence during a date set in a local high school. I'm just going to chalk it up to date-related jitters and let her pass for this one.

Tiara Soleim asked this question during the first episode after we got a glimpse into her life as a "chicken enthusiast." This was a cute take on a common expression, but it was still really odd to continue emphasizing chickens in the quest for Ben's heart.

5. "Maybe if things go well tonight, you can pollinate it later."

This is a strange quote on its own, but it was even weirder to hear Mandi Kremer say it while she was wearing a giant paper rose as a hat. It was definitely not the smoothest pickup line.

6. "I will not murder Lace, but she may very tactfully disappear."

Jubilee Sharpe did not hold back when she was talking about national treasure Lace Morris. I don't approve of her hating on Lace, but the quote was a pretty scary thing to say that I could not help awkwardly laughing at from my couch.

Olivia Caridi said this after winning the First Impression Rose. While she has made it very clear she thinks she's "deserving," the "humble" part hasn't exactly come across.

8. "Ben is the greatest Bachelor on the planet of history."

This is one of those quotes that makes viewers not help but feel vicarious embarrassment. I know what Emily Ferguson meant to say, but it just came out all wrong. Maybe she can just blame things on her twin and move on.

9. “I bet Jackie’s wishing she had a bigger mouth right now.”

It was surprising to hear shade from Bachelor alum Becca Tilley. The context kind of changes things though: The ladies were bobbing for apples to win a date with Ben — which I think is super weird in the first place.

10."I have zero ball handling skills."

To be fair, Lauren Himle said this when she was talking about playing soccer on the group date, but it was such a funny quote in isolation that I'm sure most viewers laughed at it. I mean, it's a dating show, so of course ABC was going to use that one for the innuendo.

11. "It's just hitting me that there are other girls here."

Really, Caila? It's Season 20 of The Bachelor. Did you think things were going to change up at this point? She is basically every viewer's favorite (aside from Becca), and I'm sure she was trying to say that it's finally hitting her that there are other strong contender, but come on Caila, it's pretty obvious there's other women around.

12. "My lesson from this is don't ever expect anything from humans. Gonna start adopting cats now."

I honestly had no idea who Jami Letain was and I forgot she was even on the show before she was eliminated, but this line is a pretty great thing to be remembered for. Everyone has thought this at some point while single — or maybe that's just me? Anyway, I love Jami for verbalizing the sentiment. Too funny and too real.

The season isn't even halfway through and there have already been some pretty great quotes. I cannot wait to see what else is said. I'm sure we are in for some super insightful sentiments, right? Well, maybe not, but there is definitely more entertainment in store.

For more Bachelor Nation gossip, check out Will You Accept This Podcast? Bustle's Bachelor podcast.