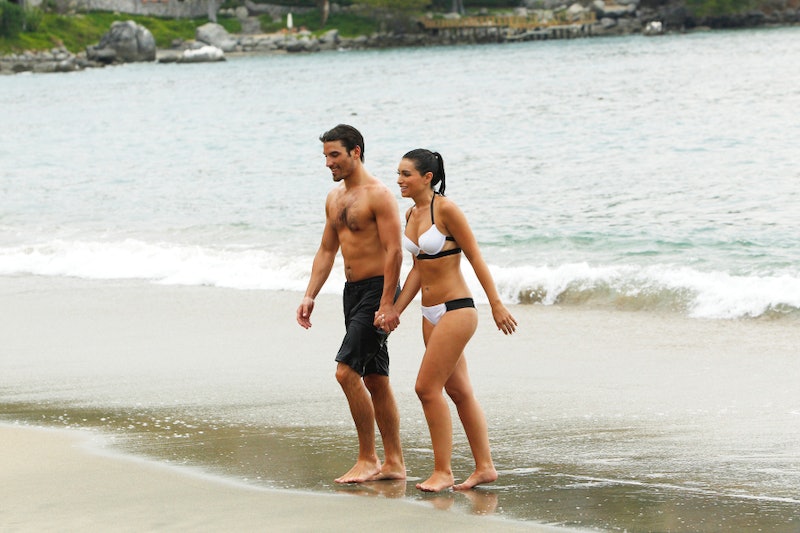 Even though I am completely obsessed with The Bachelor and basically anything that involves cheesy dialog and roses, I'm willing to admit that the franchise doesn't have the best track record when it comes to creating long lasting relationships. Most Bachelor and Bachelorette couples never make it to the altar, which means loving these shows means dealing with a lot of disappointment. But shows like Bachelor in Paradise? After two seasons, there have been two marriages — Lacy Faddoul and Marcus Grodd in Season 1, and Jade Roper and Tanner Tolbert in Season 2. OK, so the show hasn't been on that long, but what does that tell you? The potential for love is there, but it's more likely with cast members who meet outside of the traditional Bachelor mansion atmosphere. And out of the remaining stars who are single, there are a lot of Bachelor and Bachelorette couples I'd love to see happen.

I mean, I'm no matchmaker, but I've definitely watched enough of these shows to know what a lot of these people are looking for in their relationships. And the pros of coming out of Bachelor Nation? You're surrounded by other people who are also ready for marriage and spending their life with somebody else.

Here are the couples that need to get together now that they've done the whole Bachelor thing. What do they have to lose?

I can't take all the credit for this match, since JJ has already told the New York Post that he's totally into Amanda and wants to go on BIP this summer so he can meet her. But really, they just make sense together — two gorgeous single parents, looking for love and commitment? And since they both have daughters around the same age, combining their families would (hopefully) be a cinch.

I think I want this relationship to happen mostly because Ashley wants it so bad, and I have a feeling Jared may actually be into it. I don't know, though. If he really wasn't interested in her, would they have spent so much time together since paradise? Male and female platonic friendship is a thing, but I'd like to think Jared's emotionally aware enough to know he shouldn't spend time with someone with such real feelings for him if he didn't plan on returning those feelings sooner or later. And if it were up to me, it'd be sooner.

Since Carly recently told Us Weekly she's single, if she decides she wants to get back out there, Brady's not a bad choice. Since they're both Nashville musicians, they already have something major in common. Maybe a collaboration is in order?

The couple that may or may not actually be happening but we all want to be real. Theirs would be a Bachelor wedding I would plan a viewing party for. Just saying.

Ben Z. is such a sweetheart that it's a bummer he got overshadowed on The Bachelorette by Ben Higgins who is now Bachelor. And I have a feeling Becca got confused about which Ben she's supposed to be with. After two seasons in a row, I need to see this girl find love, and the other Ben could be her perfect match.

To me, Nick and Britt seem like they filled the same roles on their respective seasons of The Bachelorette and The Bachelor— the person that the leading lady and man felt an immediate connection with that overshadowed the rest of the guys. Because of that, Nick and Britt have both faced a similar kind of backlash in Bachelor Nation, so I feel like they'd totally understand each other. Plus, they're both just so beautiful.

Jonathan was last linked to fellow Bachelor in Paradise star Cassandra Ferguson, but since he hasn't shared an Instagram photo with her for awhile, that relationship might be over. Plus, I know it's not necessary to match single parents, but I always thought these two would get together on Bachelor in Paradise... but Juelia was too busy getting her heart broken by Joe Bailey, and that was difficult to watch. But now that bad experience is almost a year in the past, so if she's thinking about dating again, Jonathan might be a good pick. They both know what that BIP life is like!