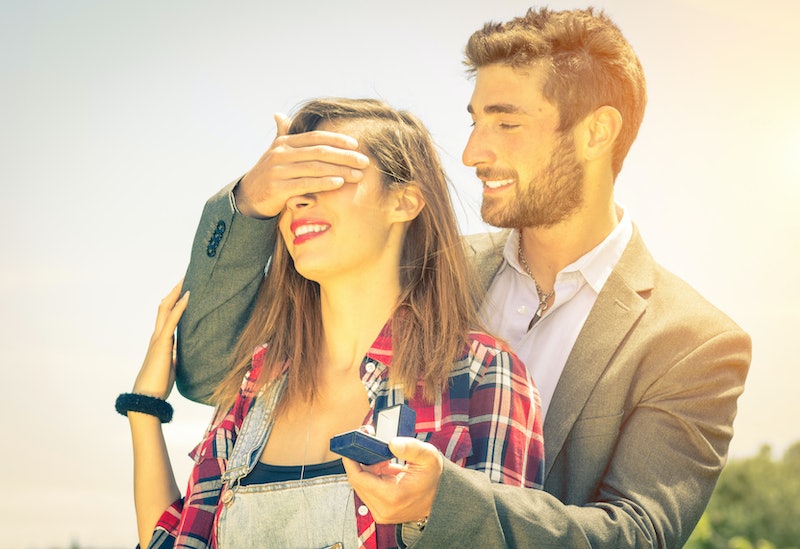 Everyone is always keeping up with the Joneses (which is the original expression, you guys — this is not a spinoff of the Kardashians), looking sideways to see how much other people spend on things like cars, houses and vacations. So a new study about weddings that reveals the average cost of an engagement ring will be of interest, especially to those of you who might be considering ring-buying, or might have a ring bought for you in the near future. Or just hope to participate in the tradition someday.

WeddingWire made public today the findings of its 2015 Newlywed Report, an analysis of 6,000 couples, including same-sex marriages. First off, they found that the average engagement ring costs $4,758, which is — not cheap. There are different conventions about how much to spend on such a ring, often based on how much the person proposing makes in a year — there's the one month's salary rule of thumb, for example, or the two month's salary rule, or the do-your-thang rule. There is even an engagement ring calculator out there.

Science has also done some studies about what engagement ring costs mean; now that you know how much the average ring costs, here's more about what science has to say.

According to a study from Emory University economics professors of 3,000 people who were either married or had been at one time, spending a bundle on an engagement ring is actually associated with a higher divorce rate. The study, which focused on heterosexual couples, found that men who spent $2,000 to $4,000 on sparklers were 1.3 times more likely to wind up divorced than men who spent $500 to $2,000, wrote the Huffington Post. The same applied for blowout weddings: Those who spent $20,000 and more on a ceremony and related reception and other parties were 3.5 times more likely to be divorced than those who spent $5,000 to $10,000.

2. But Less Is Not Necessarily More Either

Though less is more to a certain point, those who had such laid-back engagement rings that they barely spent any money at all didn't necessarily fare better than their spendthrift counterparts, said the Emory study. Though those who dropped $1,000 or less on a wedding had fewer divorces than those who splurged, the ring is another story: Engagement rings that cost less than $500 were associated with higher divorce rates in the end. Apparently, the sweet spot really is between $500 and $2,000.

3. Financial Stress Can Result In Divorce

A study that looked at the link between financial woes and divorce found that the most common reason for a marriage's end is financial stress, and those who kicked things off by fighting about money had a way better chance of splitting in the end, reports the Medical Daily. So the engagement ring study's findings may not be so shocking or abstruse: a huge rock at the outset can cause financial stress, and those who are not terribly frugal in the realm of rings might also be apt to overspend on other things.

If your partner wants to go halfsies on a ring with you, this gets a green light, according to the Today show. As reported by Brides, it is becoming increasingly common to split the cost of a ring with your future husband or wife, and though that may be not ideal to some, it's completely acceptable and sometimes quite desirable. Professional matchmaker Samantha Daniels told Today.com, "I think it makes for a better connection between the two people." There you have it.

One potential problem with splitting the cost of the ring: Most people prefer engagement to be a surprise. One study from Brilliant Earth via Google Surveys found that 65 percent of women and 60 percent of men think a ring should be a surprise, which makes it rather difficult to split the bill — unless you do so after the fact.

6. Some People Think "Money Is No Object"

Even if science says it's best to rein in those spending urges and go with a more modest ring, most people seem to think you have to go big when it comes to engagement. An American Express Spending & Saving Tracker survey of 1,850 people found that $2,345 was the magic number for engagement rings on average, according to MarketWatch, though women seem to tip that number up a bit: In the study, women said $2,731 was perfect, and men said that $1,991 was the sweet spot.

8. Spending On Rings Is At An All-Time Pinnacle

It's actually kind of wild how much people are spending on engagement rings these days. In a recent survey of 12,000 bridges and 1,200 grooms in the U.S. by The Knot, men spend, on average, $5,978, which is up significantly (from $5,095 in 2011). And women don't just flaunt the rings: They usually know the price tag. The study found that most women know how much their spouses paid for their rings.

Regardless of how much you want to spend on a ring, ethical sourcing of diamond engagement rings is a hot-button issue. Within millennials, 80 percent rated ethical diamonds as "important," and among all ages, the issue was still visible, with 65 percent rating it "important," according to the Brilliant Earth survey.

10. Other Factors Are At Play

The Emory study found that you're 39 percent less likely to get divorced if you and your partner dated for three or more years before you tied the knot, reports MarketWatch. So — yes, consider carefully how much you spend on the ring, and think before you reach for the credit card. But the ring is definitely not the only factor that determines a successful marriage.