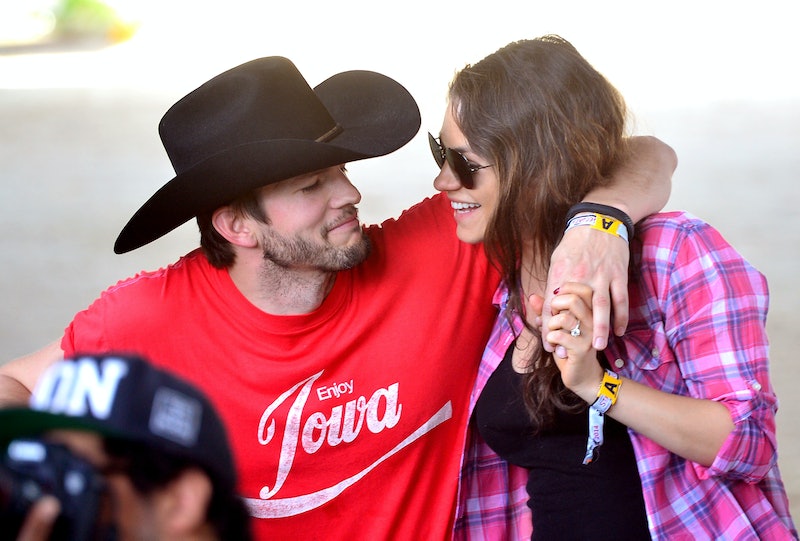 When it comes to being coy about their relationship, Ashton Kutcher and Mila Kunis deserve a gold medal. Seriously, not only did they have a secret wedding, but they acted like it didn't even happen. She was straight-up asked by James Corden on The Late Late Show last March if she was married and all Kunis said was "maybe." Then in July, she casually referred to Kutcher as her "husband" in an interview with Telegraph magazine, so people took it as confirmation. Still, they mostly keep their love life under wraps — until now, that is. On Wednesday's episode of The Ellen DeGeneres Show, DeGeneres called out the Punk'd alum out for being so "sneaky." Finally Kutcher spilled about their wedding and why they kept it so private. The 38-year-old said,

It was a ninja effort. We really didn't want helicopters at our wedding and it's a legitimate concern. I was, like, posting things on social media that were in different locations to avoid that, because we didn't want to be screaming our vows at each other and being like, "Forever!" "Did you say never?" We didn't want to do that thing, so we went really under the radar with it.

Leave it to Kutcher to make a joke about the vows. But he's right, it really seems like it would ruin the atmosphere if it was overcrowded with paparazzi. The day is supposed to be all about the newlyweds, not front-page tabloid news. They totally succeeded in their "ninja" effort. I mean, for the most part. Kutcher's Two and a Half Men co-star Jon Cryer tweeted about the wedding and kind of spilled the beans. But still, they really did throw everybody off their trail.

While he seemed shy to talk about tying the knot, Kutcher gushed over their daughter Wyatt, who's now 1-and-a-half years old. Apparently she's a big fan of dancing. Her two go-to songs? "The Wheels On The Bus Go Round & Round" and "The Whip/Nae Nae." If you're curious what that looks like, Kutcher demonstrated in the video below. You can also hear him talk about the wedding.

This definitely contrasts Kunis' visit last March when DeGeneres brought up a photo that Kutcher posted, where it had "The Kutchers" written in the sand. The talk show host pointed out that it certainly makes it sound like they're married. In response, the Ted star shrugged. "I don't know, I don't know," she laughed. Somehow, Kunis managed to avoid the question. Skip ahead to the 3:30 mark to see for yourself.

What a difference a year makes, huh? So, belated congratulations to the Kutchers! At least it's now officially confirmed. Is it too late to send them a blender or some other wedding gift in the mail?