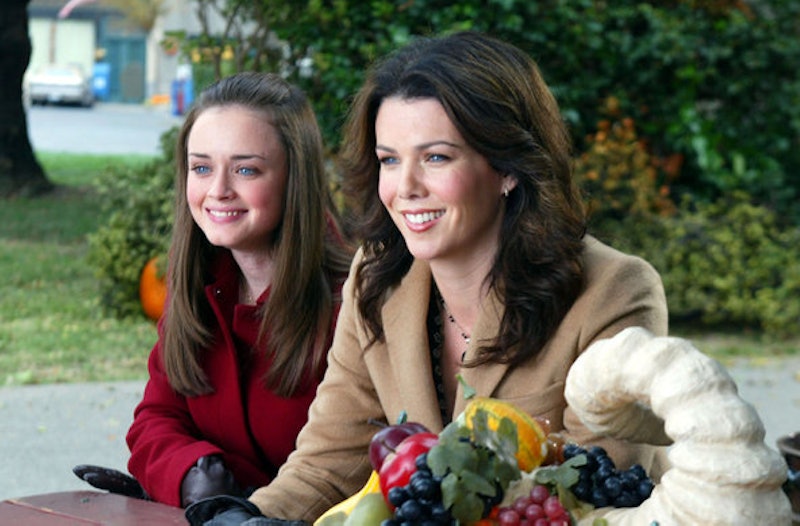 Gilmore Girls fans were devastated when the show ended its seven season run in 2007. Which is why they were obviously completely ecstatic to hear that the popular mother-daughter comedy will be returning to Netflix along with tons of the show's original characters. It's going to be a full-blown Stars Hollow reunion. However, there's one thing that must be lurking in the back of your mind at this stage in the game. While you may be curious about where the character's paths have gone over the past nine years, you may have also wondered to yourself: How old are the Gilmore Girls characters now?! It has been nine years after all. And, yes, that is a pretty long time.

In fact, just to put the character timelines into better perspective, when the show first started in the year 2000, Rory Gilmore was just starting out high school at Chilton. And when the show ended, well, Rory was a graduate from Yale University. So that would mean that Rory — and all of her close in age boyfriends and friends — are now well into adulthood. It is like the entire next generation of Stars Hollow. Feel old yet? Well, luckily, we have all aged along with the characters. And, with time and aging, comes new experiences and adventures. So, here is the character aging process we can expect.

Lorelai will always be the cool mom you wish you had. And while she might freak out about now being 48, with a little bit of coffee I'm sure she'll be fine! Lorelai famously had Rory when she was just 16 years old and by the last season of the Gilmore Girls she was just approaching 40.

Most Gilmore Girls fans may be close in age to Rory themselves. Which may make this number even scarier. Because, that's right, Rory is now the same age (or even a little bit older) than her mom was in the first season of the show. However, there's no need to fret! By now, she's probably settled into adulthood and getting ready to start her all new chapter in life. And it's probably just as perfect as usual.

Emily Gilmore is now officially a senior citizen... Just don't tell her I said that. Odds are this grandma is still hosting the most prestigious parties and keeping up with her country club friends. Nothing is going to bring this debutante down.

Although it was never made clear as to exactly how old Luke is, the show has given us a pretty good idea that he's a bit older than Lorelai (but not by much, of course). Therefore, that means that if Lorelai is just now approaching her 50s then he's already in them. And something tells me the old age has only made him grumpier. Think he's still running that diner?

Logan graduated from college a year before Rory, making him one year older than she is. Meaning that if Rory is now 32, he has to be 33. So, do you think he settled down and finally got that wedding he originally wanted with Rory?

Even though he didn't graduate high school at the same time that Rory did, Jess is still the same age as her. So, how have their lives changed since Jess' last visit to Stars Hollow? We do know that he ended up working at a publishing company and even writing a book. Seeing an older, way more mature Jess than when we first met him will definitely be interesting.

Remember when Dean got married at just 18 years old? Well, now he's 32. And with a divorce already under his belt, I can only imagine how far his life has come in those missing years. He could have easily gotten married and divorced again — maybe even with kids in the picture. We'll just have to wait to find out.

At the ripe age of 32, Lane is sure to be doing big things. After opting out of school to pursue the musician lifestyle, I can only imagine the places she has been and the uncharacteristic lifestyle she has led. Because when Lane sets her mind to something, she does not let it go.

However, out of all of Rory's friends, it's the 32-year-old Paris Geller that I think we're all afraid (and excited) to meet. If she hasn't won her Noble Peace Prize by now then we are surely all in for a rude awakening. However, with her dream to be a doctor underway, she's probably a renowned surgeon by now.

At the end of Season 7, Christopher finally wanted to marry Lorelai. But since it took so many years for him to figure that out, things ultimately didn't work out for Rory's parents. So what has happened to Christopher now that he's approaching 50? I can only imagine that his love life is struggling just as it always has.

While we do know that Yanic Truesdale is definitely coming back for the Gilmore Girls revival, the exact age of his character had never been totally clear. However, he always seemed to be slight younger — yet way more mature — than Lorelai (hence all of his character's judgements). And, honestly, an older and wiser Michel is going to be nothing less than amazing. I wouldn't even be surprised if he left the DragonFly Inn to travel the world or something.

Stars Hollow would simply not be Stars Hollow without Kirk. Which is why, obviously, actor Sean Gunn will be returning to the revival as well. But what job is Kirk doing now that he's reached 40? Although it's hard to tell what his exact age is (but I do know that he tried to date Lorelai once, so he can't be too much younger than her) that's the real question here. Let the brainstorming begin.

The exact ages of these three town staples were never exactly clear. However, they definitely were older than Lorelai and around the same age (if not older) than Lorelai's mother, Emily Gilmore. And all three actors are returning! Something tells me this town is just going to get crazier with these three in their old age. Think they'll be able to handle the incoming of the next Stars Hollow generation?

As much as you may dislike her character, Vanessa Marano will be returning to the Gilmore Girls revival as Luke's daughter April. And she's probably the youngest semi-original character in town at this point. When April first appeared in Stars Hollow she was just 12 years old in Season 6 (2005). That would make her now 23 years old in 2016 and most likely a recent college graduate. After those awkward years, it's definitely going to be interesting to see the type of adult she's turning into!

Jackson's age has never really been clear throughout the show. But he did seem to be around the same age as his wife Sookie and Lorelai. And now, well into his 40s, he is probably the King of Dad jokes and embarrassing his kids. Let's just hope he's not officially hitting his mid-life crisis!

OK... Melissa McCarthy has not officially been confirmed to be joining the revival. However, there are some hints that Sookie will be back. And, with that, I need to speculate what our favorite chef's life might be like today. And — assuming she's around the same age as Lorelai — I'm thinking she's a mother of teenagers. That's right. By now her kids are probably approaching high school! Think they'll go to Chilton like Rory?

Yep, the town of Stars Hollow sure has aged. But I know that no matter what we'll still be returning to those same characters we left behind in 2007. Seriously, I just need to know when this revival is coming out already.

More like this
Emma Thompson, Lashana Lynch, & Stephen Graham Lead Netflix’s 'Matilda'
By Sophie McEvoy
15 Intriguing Movies On Netflix That Are Based On True Events
By Mary Kate McGrath, Shannon Barbour and Grace Wehniainen
What’s New On Netflix: 'Stranger Things' & 'Mean Girls'
By Arya Roshanian
Don't Expect To See Your Fave Modern Royals Depicted On 'The Crown' Season 6
By Jack Irvin
Get Even More From Bustle — Sign Up For The Newsletter