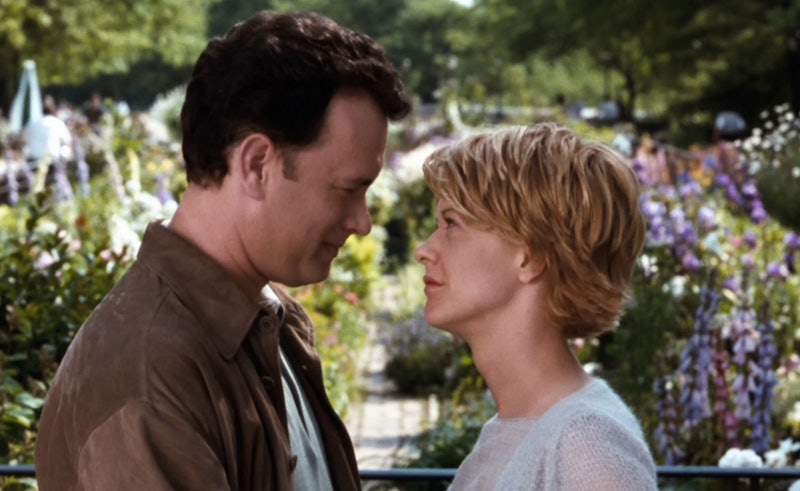 Considering that the film was written by Nora Ephron, it's no surprise that 1998's You've Got Mail is one of the best movies ever made starring Tom Hanks. Those that know me understand how passionate I am about the film, and I have been known to quote it endlessly, much to the annoyance of just about everyone else. But as my fellow fans of Ephron know, she wasn't only capable of making romantic and witty movies, but was also super insightful about the way the world works. While some critics might dismiss You've Got Mail as a silly '90s rom-com, I'm here to set the record straight, because You've Got Mail made a lot of predictions about the world, and it actually got most of them right.

The time I first saw it, in an empty old movie theater alongside a friend, I didn't think the movie had much lasting value. It wasn't until years later that I realized how relevant You've Got Mail is to contemporary life. From its commentary about online dating, to its understanding of the necessity of Starbucks, to its talk about the future of the book business, You've Got Mail is more crystal ball than time capsule. Sure, it's filled with '90s shout-outs and rom-com era Tom Hanks looking hot as hell, but it also understands how people of all decades work. Here are all the things You've Got Mail got right about life.

1. Starbucks & Complicated Coffee Orders Would Take Over The World

By the time You've Got Mail came out in 1998, Starbucks was already inching closer to world domination. But what the script got so right about the way the world was heading was in its sharp dissemination of a person's coffee order. As Joe Fox (Hanks) laments, "People who don't know what the hell they're doing or who on earth they are can, for only $2.95, get not just a cup of coffee but an absolutely defining sense of self: Tall. Decaf. Cappuccino." Here, Ephron and her sister/co-writer Delia Ephron nail it. A person's coffee order is an intrinsic part of their personality. Basically, if you don't know what drink to get, you don't know where you're going in life or what you're even doing.

2. The Days Of Physical Book Stores Were Numbered

In You've Got Mail, Kathleen Kelly (Meg Ryan) runs The Shop Around The Corner, a local children's bookstore. But when a Fox Books megastore opens nearby, she quickly goes out of business. There's long been a tension between independent bookstores and chains, and the movie plays on this rivalry well by pitting owners Ryan and Hanks against each other. In real life, bookstores have not fared well for the past 20 years, but once-beloved chains like Borders and Barnes & Noble have struggled or gone out of business, and independent bookstores have begun to thrive again. You've Got Mail argued in favor of the independent store long before this turn of events, heralding in the new era.

3. Technology Would Change, But Relationships Wouldn't

The days of renting videos may be long gone, but as every couple knows, Saturday night is all about Netflix and chill, or at the very least, fighting over which movie to watch on Netflix. You've Got Mail understood this was a core tenet of any relationship.

4. Hats Would Always Be A Mistake

5. Engaging In Online Discussions Would One Day Be Considered An Art

You've Got Mail was so exciting because it documented the shift in communications taking place as internet usage became more widespread. And what it really got right was the true craft that goes in to constructing the perfect message. Whether you're in a Twitter feud with someone or want to start a chat with a future bae, writing online is basically an art that most of the world is continually working on today.

6. We'd All Interact More With Computers & Screens Than We Would With Real-Life People

The Ephron sisters saw this one coming before the rest of us did. It seems as though we're all glued to our phones, tablets, and laptops most of the time these days, and You've Got Mail showcased the start of the all-important relationship between humans and screens.

7. Love Letters Would Be Sent Online

I'm sure some people have stories of handwritten notes they've received from admirers and loved ones, but most of the meaningful relationships in my life take place online. Some of the most romantic things others have ever said to me were delivered over Facebook chat, or in blog posts written for me. Maybe you think this is pathetic, and OK, maybe it is, but You've Got Mail understood that one day, we'd all feel the rush you can only get from receiving an intimate online message.

8. Meeting Up With People From The Internet Would Be Potentially Terrifying

While not everyone you meet online is a catfish, or a murderer, or both, some people are, and meeting up in person will never not be slightly scary.

Messina and Ramirez both had roles in You've Got Mail early in their careers, and both became stars on popular TV shows: Messina on The Mindy Project, and Ramirez on Grey's Anatomy.

10. We'd All Start Calling Each Other By Our Usernames

Just like your unique coffee order, your username or online identity is every bit as intrinsic to your personality. There's nothing cuter than calling a pal by their screen name. It's the pinnacle of friendship.

11. Tom Hanks Would Always Be The Greatest Man Alive

Even at his worst, he's still the best.

You've Got Mail continues to be one of my favorite films, and has taught me so many lessons about life, love, and the internet. I highly recommend that you re-watch it right now.