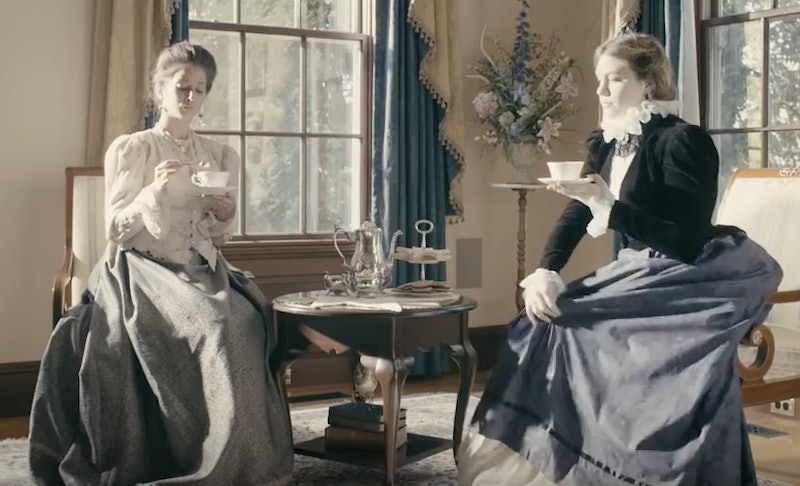 Different cultures and regions have found ways to explain menstruation throughout history, and now a new web series is comedically capturing all those beliefs. Period Piece shows periods throughout history, including Victorian England and Colonial America — and you guys? It's the funniest set of history lessons you'll ever see. The episodes feature mostly women putting a humorous spin on the topic, dressed in the appropriate fashion and often speaking in accents. I love this lighthearted approach to something completely natural that still bears so much unwarranted stigma. Periods are the norm, people. It's high time we got comfortable with that fact.

Liliana Tandon, creator of Period Piece , hopes that these videos will help to remove the stigma from periods and encourage people who menstruate to embrace their monthly visitor, per the website. That's not all Tandon and her team are up to, though; they also hope to eventually work with charities to bring menstrual products to countries in need at affordable prices, as well as create a platform to speak for those who might otherwise have been denied a voice.

According to Period Piece's no-nonsense description, it's a "series about women in different periods of history... having their periods." It looks like this is just the first season, and I can't wait to see what else these ladies have in store. Periods have never been this wonderfully silly. And now, for your viewing pleasure...

Way back, the odor of a menstruating woman was actually a turn-on because it signaled that she was fertile. There's something you don't hear from a lot of people today — "Dude, she smells so amazing, and... menstruation-y."

Sure, it was totally inappropriate to have period talk during these times. But during tea time, these ladies were cramping like whoa and just couldn't hold it in any longer.

The Cherokee had it right in believing that Aunt Flo gave women strength and could bring down their enemies.

In biblical times, menstruating was like a group thing. Women would get together to have their periods and tell stories and stuff.

Buddhists had a very radical belief regarding menstruation: It's a natural process about half the population goes through on a monthly basis. What a thought!

Although disposable napkins (otherwise known as pads) were available, women weren't too hot about them until they were able to pay for them without having to talk to a store employee. (Can you blame them? I'm 27 years old and I still feel weird having a cashier ring up my tampons.)

While folks who get periods might still panic when a partner finds out that — gasp! — they're human, people have started to understand that periods are part of our nature.

More like this
How To Fight For Reproductive Rights, Based On How Much Time You Have
By Courtney Young
23 Abortion Funds In States With Trigger Bans To Donate To
By Emma Carey
Sandra Bullock, Girlboss Extraordinaire
By Matt Harkins & Viviana Olen
Lydia Leonard Is Setting The Record Straight
By Olivia-Anne Cleary
Get Even More From Bustle — Sign Up For The Newsletter