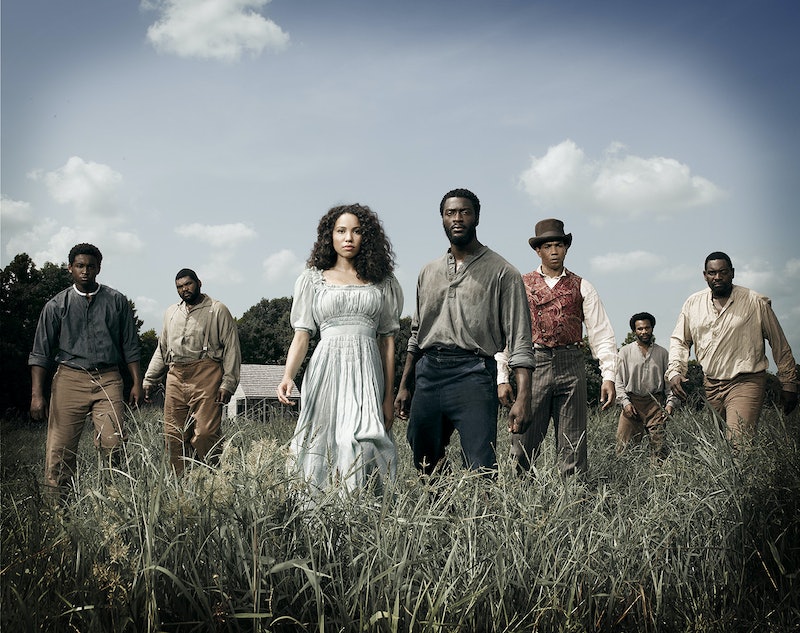 There is a scene two-thirds of the way through the premiere of WGN America's newest period drama, Underground, where a kind, friendly house slave is whipped. Many American slave stories feature whipping scenes, as it visually communicates the horrific violence committed against slaves and drives home the horror that generations of African-Americans went through. What's unique about Underground, however, is how undramatically this act is treated.

After Rosalee (Jurnee Smollett-Bell) tries to stop a man from whipping her brother because he accidentally crossed in front of the man's cart, she is not tied up or forced to undress or anything else often seen in film and TV depictions of this violence. The man takes out a whip and repeatedly strikes Rosalee's outstretched arms. The brutal act leaves open wounds on her arms, Rosalee cries out, and the plantation falls silent to witness the act, save for the mournful orchestral score and the sounds of the whip crack. Then everything goes back to normal. The man is told to stop because, in the words of the head of the plantation, "she's gonna need those hands to serve at the party tonight."

This scene is one of a few horrific instances that occur in the pilot episode of Underground, and yet despite giving weight to the horrors of slavery, the show moves past them to reach a place of hope through a thrilling narrative.

Underground follows a group of slaves attempting to escape their plantation, and at times the show feels less like a traditional slave narrative and more like a heist film. There's even a scene where the ambitious Noah (who is introduced to the series running through the woods set to "Black Skinhead" in one of the most exciting sequences of this television season) is discussing different members of the "team" that will pull it off — except instead of a heist, it's an escape from the terrifying conditions of the plantation.

While in lesser hands the clashing of genres may come off in a messy and disrespectful fashion, creators Misha Green and Joe Pokaski use the reality of slavery to add a severity to the proceedings. The stakes are so incredibly high and the risks of failing to accomplish their goals are massive, but the promise of freedom is so overwhelming that this group will go through seemingly anything to make their way up north.

Missing from Underground is something that would appear in the typical Hollywood slave narrative: any number of "white savior" characters who aim to suggest that not all white people were bad, as well as act as the "heroes" for black characters. When the series does employ a white character to assist those trying to make their way north through the character of John Hawkes, it also highlights his own trepidation and doesn't paint him as a "savior." Underground also features Christopher Meloni as a man whose morality and intentions subvert this trope, creating an extremely complex character in August Pullman.

The fact that Underground manages to be an action-driven genre piece without cheapening the brutal realities of slavery is an accomplishment in and of itself. What's even more astonishing is that by the end of the pilot, all of the characters feel fleshed out thanks to strong writing and some of the best acting you're likely to find on television this season. Standouts include the previously mentioned Smollett-Bell as Rosalee; Aldis Hodge's lead performance as the relentless Noah; Alano Miller as Cato, a slave who has worked his way towards being in a higher position amongst other slaves; Amirah Vann as lead house slave and desperate, caring mother Ernestine; and Jessica De Gouw as Elizabeth Hawkes, who gets a shining moment in the pilot episode delivering some of the sickest passive-agressive burns you're ever going to see in Southern high-society.

Underground is the boldest new show of the season, putting the complex and troubling history of America on television for weekly viewing. It succeeds by creating compelling characters and using the reality of slavery to accentuate the more TV-friendly heist-style action of the characters. The show is often soundtracked by musical selections from the modern era, which may be difficult for some to digest but also serve as a reminder to those watching that the fight being depicted isn't over, it's merely taken a different form. Underground is an ambitious, exciting new series that hits its goals and deserves to be talked about.

More like this
Yinka Bokinni Recalls Terrifying Truth At Heart Of 'How To Hire A Hitman'
By Frances Stewart
Everything We Know About When To Expect Money Heist: Korea Part 2
By Kadin Burnett
Viktor Hargreeves’ Coming Out Scenes Are The Sweetest Part Of Umbrella Academy Season 3
By Gretchen Smail
Wait, What’s Going On With Ben In That Umbrella Academy Season 3 Post-Credits Scene?
By Gretchen Smail
Get Even More From Bustle — Sign Up For The Newsletter