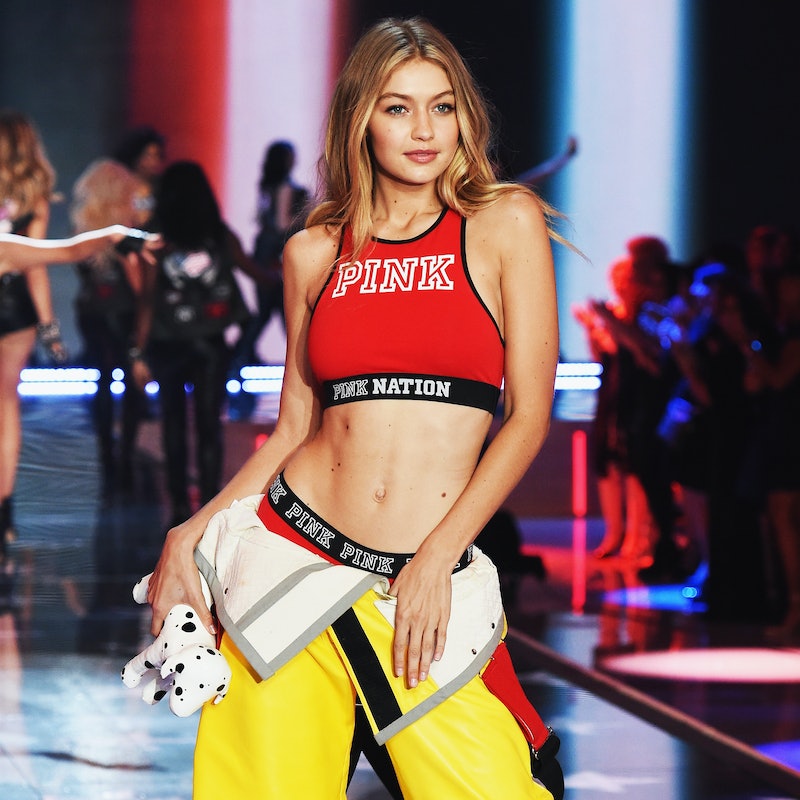 Gigi Hadid totally killed it last year the 2015 Victoria's Secret runway show. Rocking gorgeous Pink activewear with a fireperson theme and slaying the scene in absolutely insanely beautiful black butterfly wings, there was no question Hadid deserves to be a VS angel. But is Gigi Hadid in Victoria's Secret's 2016 Swim Special? Unfortunately, Hadid did not appear in the documentary-style show that aired on CBS Wednesday night. Instead, a selection group of more established angels made appearances, but that doesn't mean Hadid couldn't be a part of next year's show. After all, she's clearly got the chops for it.

Hadid, along with close friend Kendall Jenner, made waves last year when they hit the Victoria's Secret catwalk together. Both women were in the headlines almost constantly leading up to the show. Hadid, though, had a little more practice under her Victoria's Secret belt that Jenner at the time. In fact, the 2015 runway show wasn't even her first work with the brand. Hadid began her Victoria's Secret career as a member of the Pink team before making her move to the catwalk. That's what made her look at the show so cool. Hadid rocked an adorable red Pink sports bra and briefs underneath a pair of fireperson pants. Basically, she did a throwback in the coolest way possible.

While Hadid didn't quite make it onto the 2016 Victoria's Secret Swim Show 2016, there's little doubt that she's well qualified.

After all, she's already hit the catwalk in a bikini. Her moment during the Tommy Hilfiger runway is practically legendary.

Not to mention she killed it for Sport's Illustrated.

Basically, she can do no wrong, so here's looking at you, Victoria's Secret. Time to get Hadid on the roster for the 2017 show.