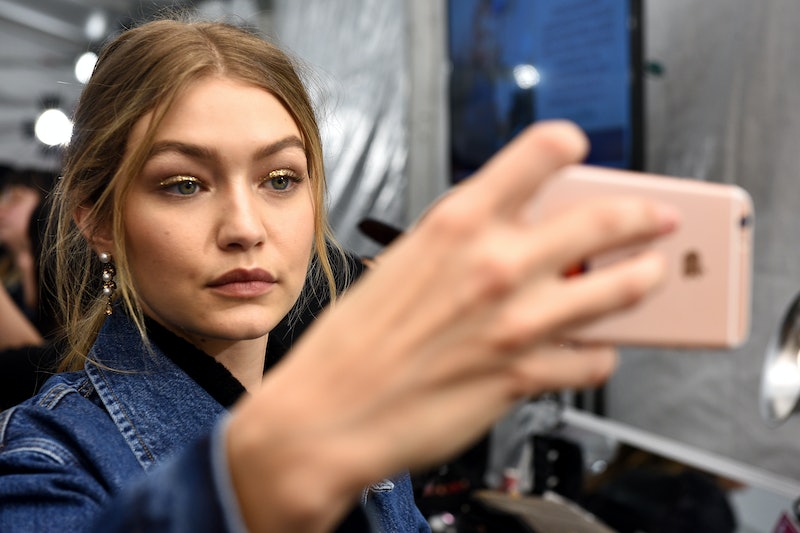 While the world may still awe over all of the ways that Taylor Swift and Calvin Harris exemplify #relationshipgoals, it's a brand-new celebrity "It" couple that has everyone's attention these days. After weeks of rumors, former One Direction boy bander Zayn Malik confirmed in early Feb. that he's officially dating Gigi Hadid — and he even put the model front and center in his must-watch music video for "Pillowtalk." Now, Malik has a new single titled "Like I Would," which dropped on Malik's VEVO on Thursday. The steamy track, in which Malik sings about how good he'd be to the girl of his dreams, is getting fans majorly hyped for Malik's upcoming album Mind Of Mine. Of course, the new track is also causing fans to speculate something else: whether "Like I Would" is about Gigi Hadid.

So, is it? Well, if you follow Malik on social media, you may have noticed that on Thursday — the day that "Like I Would" hit the Internet — Malik happened to post this sweet picture of his girlfriend. The caption associated with it is a lyric from "Like I Would," and it seems to suggest that the song is indeed inspired by the model.

If you're a celebrity skeptic, these lyrics might suggest that Malik was into Hadid when she was still with her ex Joe Jonas, whom she split with in November of 2015 — less than three months before Malik and Hadid became a confirmed couple:

He won't touch you like I do/ He won't love you like I would/ He don't know your body/ He don't do you right...

It's a great celebrity theory, but if we're being honest here, it's far more likely that this song isn't technically about Malik's new girlfriend at all. Though it's unclear when "Like I Would" was written, there's a real chance that the lyrics were written before he got together with Hadid — meaning they could be about his ex, Perrie Edwards. (After all, Malik did admit during an interview with Zane Lowe on Beats 1 to writing much of the album when he was with Edwards.)

So, while Malik may be coining Hadid his muse now, the actual lyrics could describe an entirely different situation.

And if the song really is about Hadid? Well, here's hoping that we can look forward to another seriously sexy music video.

More like this
Selena Gomez Joked About Her Relationship Status In Her ‘SNL’ Monologue
By Grace Wehniainen
Twitter Is Upset About The 'American Idol' Top 3 Results: "Who TF Is Voting?"
By Jake Viswanath
How 2 'American Idol' Singers Performed With COVID-19 & Made It Into The Top 5
By Jake Viswanath
Jennifer Lopez Found The Perfect Ben Affleck Throwback Video For Mother’s Day
By Stephanie Topacio Long
Get Even More From Bustle — Sign Up For The Newsletter