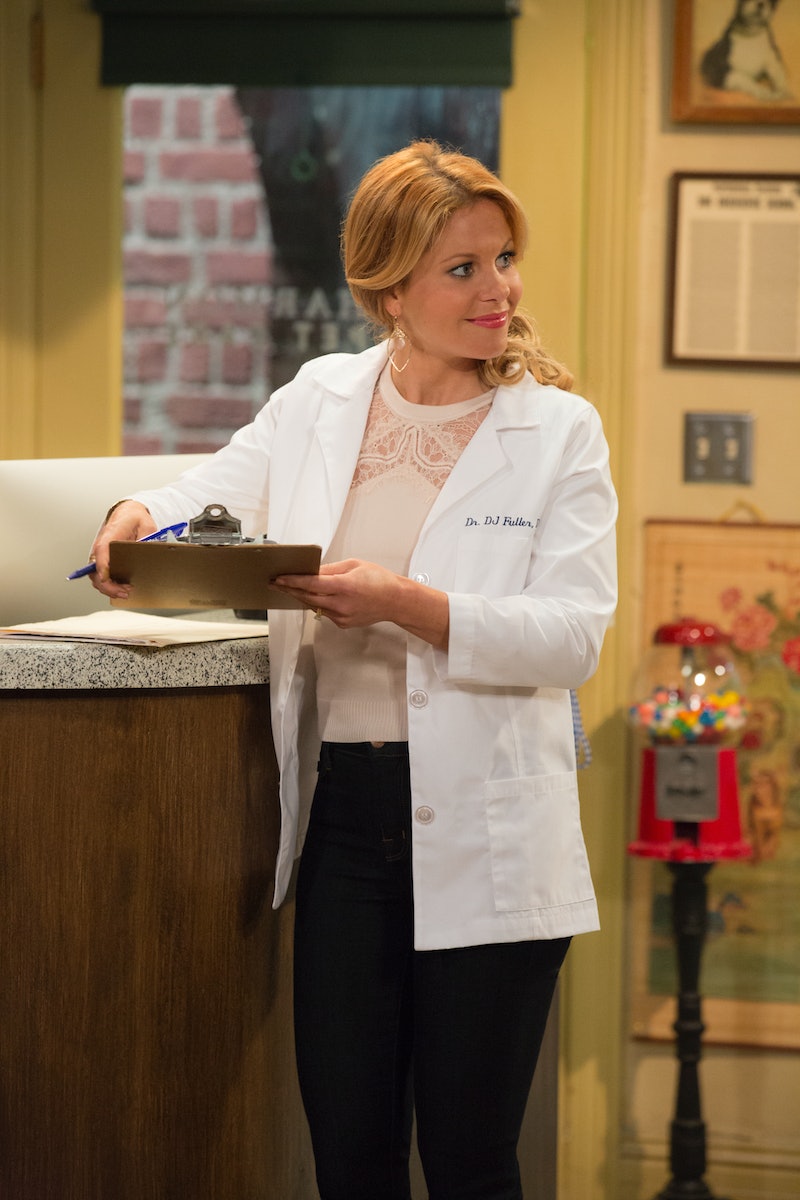 Full House fans rejoiced on Feb. 26 when Fuller House premiered on Netflix, letting us visit the Tanner family for the first time since 1995. For everything that stayed delightfully the same, like the titular house, some aspects were definitely different, like the sense of humor and meta references. One of the most memorable examples of those changes was the way Fuller House addressed the Olsen twins' absence — with a joke about Michelle running her New York fashion career and the entire cast staring right into the camera. And though it was different from anything Full House ever did, star Candace Cameron Bure enjoyed breaking the fourth wall for that joke.

“That was actually really fun,” Bure tells me at ABC's Television Critics Association party, which occurred before the Fuller House premiere. “We never did that in the original series. It was fun that there was a moment that we could do that. I thought they utilized that well.”

A lot of things happen on Fuller House that never would have on the original show. Airing on Friday nights in ABC’s family-friendly TGIF block, Full House didn't make more grown-up jokes about "sister wives" or "seamen." But despite the more adult humor sprinkled throughout Fuller House, Bure doesn't consider it to be an "edgier" series.

“I don’t really think that we’re edgy and risque,” she says of the Netflix series. “Times have changed since the ‘80s. It’s just what is topical or important today and how people are today.” In addition to the humor changing, Fuller House embraces modern slang and pop culture references, much like the way old episodes of Full House totally encapsulate the late '80s and early '90s. "It’s a new show, so it’s all about what’s hot and cool now," Bure says.

However, one thing the two series do have in common is that they both begin with tragedy. Full House began with DJ losing her mother, which is why her father had to move Joey and Uncle Jesse in. Now, DJ has lost her husband, which is why Kimmy and Stephanie move in with her. This creates a definite parallel between the two series, and Bure explains that it was a very deliberate choice to start Fuller House with DJ being a widow.

"There were very specific reasons as to why she would be widowed and not just divorced,” the 39-year-old says. Though Bure doesn't elaborate on what those reasons were, if you've seen seen all of the first season, you might have an idea of your own. The season finale ended with DJ deciding to be single, after her ex-boyfriend Steve and co-worker Matt both wanted to date her. This storyline may not have worked as well if DJ was divorced, because her ex-husband could've been in the equation — just look at what happened between Kimmy and Fernando.

So when Fuller House returns for Season 2, viewers will again watch a single DJ raise her three sons with some help from her best friend and sister, just like Danny raised his three daughters with help from his best friend and brother-in-law. Bure's role has really reversed for the new series, though she may not have realized just how much Danny passed the torch to DJ.

"I didn’t give it much thought as a kid, but I definitely love that us ladies are the leads now,” Bure says. “It’s a great responsibility ... Of course I’ve been in the business for so many years, so I guess I don’t relate it in that way, but I’m glad that my character kind of takes on some of the traits that [Danny] had.”

Another parallel between the two shows are the opening credits. The Fuller House pilot had the returning cast recreate their scenes from the original credits, and the rest of the episodes show clips from the original during the opening sequence. Callbacks like those are one of the things Bure loves about the new series.

"They’re just such great memories," she says of the opening credits. "It’s still a new dynamic because it’s so different 30 years later than when you were a kid, but it was really fun to see the concepts that Netflix had for us to do. So there’s still a spin on everything so it feels very familiar but at the same time, it’s very new."

Another element that carried over from the first series is the studio audience cooing “awww” every time there is a touching moment on Fuller House, which happens often. When I ask Bure about hearing that sound again, she immediately lights up. "It’s the best," she says. "It’s like coming home."