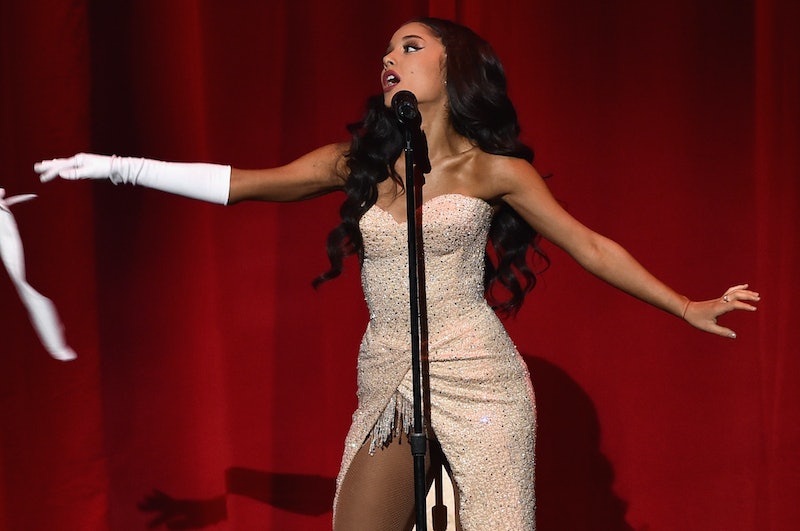 Out of the moonlight, a dangerous woman is born. After plenty of social media teasing, Ariana Grande dropped her new single "Dangerous Woman" Friday, and it's definitely a risqué release for the usually pop-tastic Grande. With a title like that your mind instantly conjures up a femme fatale with a gun in her garter, half James Bond, half Gilda. But what is Grande's "Dangerous Woman" about, exactly? Let's take a peek at the lyrics to find out...

The opening lines seem to assert that Grande is in control of her entire life: "Don't need permission/ Made my decision/ Test my own limits/ 'Cause it's my business/ God as my witness/ Start what I finish." Grande isn't letting anyone else determine who she is, how she lives, or what she's doing. So far, I like it. The next portion is excitingly threatening: "Don't need no hold up/ Taking control of this moment/ I'm locked and loaded/ Completely focused/ My mind is open," Grande sings. Interesting! Maybe Grande is, in fact, a literally dangerous woman, armed and ready to bash some skulls in. Maybe she's playing an assassin. It's at this point that Grande launches into the pre-chorus and all becomes clear: "All that you got/ Skin to skin/ Oh my God, don't you stop, boy." There's no mistaking that part's about sex.

The chorus continues, "something' bout you makes me feel like a dangerous woman" and "somethin' bout you makes me want to do things that I shouldn't." Simply put, the chorus is definitely about how sex makes Grande feel like she can take on the world. And hey, that in and of itself is empowering — the lyrics "Nothing to prove and I'm bulletproof and/ Know what I'm doing" indicate that.

I guess what especially makes this an intriguing direction is that, until recently, Grande's upcoming album was to be named Moonlight . Then, sometime around January, Grande revealed on Twitter that she was actually picking between Moonlight and "another." Eventually, Dangerous Woman was the title to win out, and it definitely sends more of a statement than the glittery, girlish former title. In doing this, and pushing out a bold, sexy, empowering second single, Grande is clearly trying to show her fans and critics alike that she's strong, grown up, and ready for a change. Sam & Cat, who?

Considering that there's a large tweenage (is that a word) demographic of Arianators, I'm not sure how this direction will take. What is certain is that Ariana Grande is pulling out the big guns for this new album, so you better get ready.

More like this
Spice Girls’ Net Worth: The Richest Member Is Wealthier Than The Rest Combined
By Hugh McIntyre
Long Live Bennifer!
By Allie Jones
Why The '365 Days' Sex Scenes Are Good, Even If The Movies Aren’t
By Arya Roshanian
Cameron Diaz Just Recreated *That* Iconic 'There’s Something About Mary' Scene
By Rachel Mantock
Get Even More From Bustle — Sign Up For The Newsletter