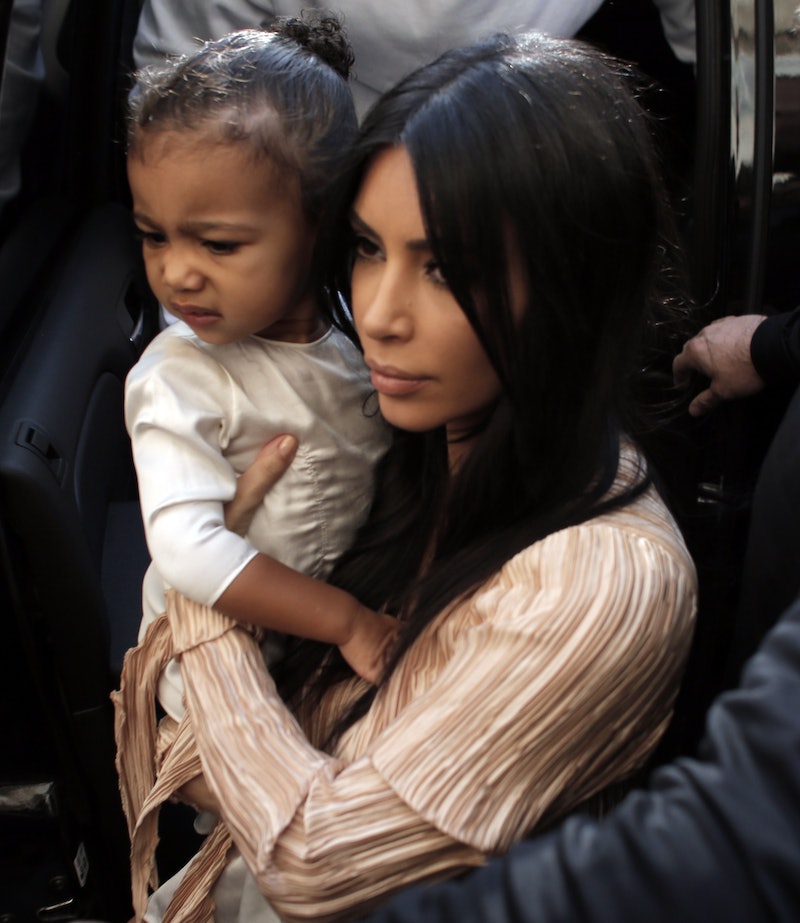 Despite all the hoopla surrounding Kim Kardashian's naked selfie on Twitter and Instagram, she didn't let the haters get her down. Instead, she decided to join yet another social media platform. Last week, Kardashian officially entered the world of Snapchat. In doing so, she's giving fans an even closer look at her day-to-day life; basically she's showing what it's really like to be Kim K. I would be lying if I said my favorite part wasn't North West's cameos. Yup, Kimye's daughter is the true star of Kardashian's Snapchat. Instead of giving into the hype or hamming it up for the camera, North reveals her true thoughts about the app. The verdict? She's not a fan — and she doesn't try to hide it one bit.

In one particular snap, the mom of two revealed that North is actually scared of Snapchat. I mean, what toddler would want a camera in her face? Apparently it's because she doesn't like the filters. Honestly, some of those are terrifying, so I don't blame Norie one bit. The giant rabbit face is absolutely horrifying.

For the most part, she appears disgruntled around the camera. But there's also the most adorable video where she's wearing a tutu and playing under the table. So lo and behold, here's a round-up of evidence as to why North West is a Snapchat star in-the-making.

Perhaps she's a 2-year-old trendsetter and instead of Snapchat, she'd rather use Periscope. She could be on the cutting edge of technology and thinks Snap stories are overrated.

In North's world, every day is Valentine's Day. Now that's a world I want to live in.

Apparently Nori has her own plate to eat her vegetables on. And just look at that Minnie Mouse spoon! She's clearly dining in style.

5. Being A Style Icon

Honestly, I wish I could pull off patterns and shoes like that.

6. Rolling Her Eyes At Her Parents

As Kanye dances in the car and Kim sings along, NW is back there rolling her eyes. It's pretty hilarious, since it's how most kids react when their parents are embarrassing them.

The moral here? Keep being yourself, North. Not everyone could possibly love Snapchat as much as Auntie Kylie.