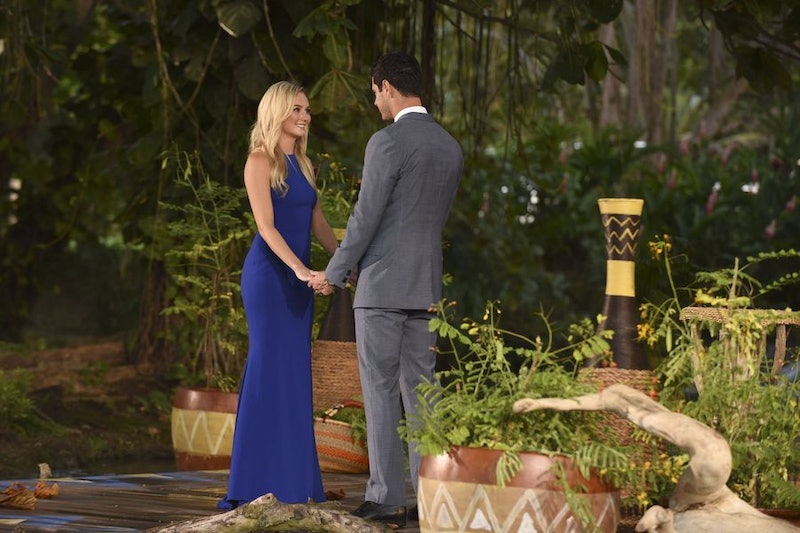 You guys, the more Ben Higgins talks, the more I want him to kindly shut the hole in his face. Sure, he told two women on his season that he loved them (which is definitely a jerk move when you’re getting their hopes up like that), but what I dislike more is his everyday sexism. He may not even know that he’s doing it, but Bachelor Ben has had his sexist moments. Ben asked Lauren’s father for her hand in marriage (as if she didn’t have the wherewithal to accept herself), and then during the After The Final Rose show, Ben said that he just “wanted to show [Lauren] off.” Ew?

Chris Harrison was interviewing Lauren and Ben about their future plans for their relationship, and while they chatted a little bit about waiting to get married and starting to date like a normal couple, Ben said that he just really wanted to take Lauren out and show her off. Look, Lauren is beautiful and vivacious and funny and smart, but why is Ben reducing her to her pretty face and her hot bod? Why couldn’t Ben have said, “I’m looking forward to picking Lauren’s brain about foreign policy and immigration reform?” He could have talked about anything else, but he chose to focus on her looks.

The other side of Ben wanting to “show [Lauren] off” is that showing her off demonstrates that he could think of her as his property — something to be flaunted like, “Hey, this one is mine, you guys.” This is also gross, because Lauren has her own brain and job and life, and she’s no one’s piece of meat. She’s a smart woman who has it all together, and for Ben to insinuate that Lauren is “all his” is not only assumptive but out of touch, too. After all that, I'm kind of glad this season is over. Here's hoping JoJo's will be filled with far less sexism.

More like this
Bachelor Nation's Blake Horstmann Is Dating 'Love Is Blind' Star Giannina Gibelli
By Jake Viswanath and Radhika Menon
Chrishell Stause & G Flip Have “No Rules Or Regulations” In Their Relationship
By Brad Witter
Winter 'Love Island' Will Be Back In 2023, ITV Bosses Confirm
By Maxine Harrison
Kim Kardashian Reveals The First Text She Sent To Pete Davidson
By Jake Viswanath
Get Even More From Bustle — Sign Up For The Newsletter