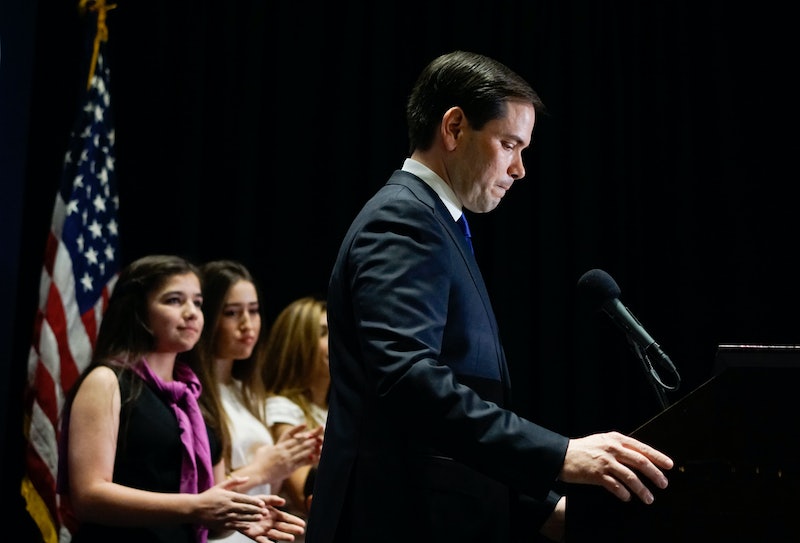 Super Tuesday 3 marked the end of Marco Rubio's campaign for the GOP presidential nomination, and many are wondering if the Florida senator will be joining the likes of former candidates like Ben Carson and Chris Christie in endorsing the party's controversial frontrunner. Based off of what the politician has said in the past, it's highly doubtful that Marco Rubio will endorse Donald Trump.

Regarding a canceled rally for the real estate magnate, Rubio condemned the hostile environment that led to violent protests in Chicago. Rubio added that, though he made it clear he would back whoever received the Republican nomination, it's nonetheless "getting harder every day" to channel that support behind Trump. Such a statement casts doubt as to whether Rubio will endorse the man who went on to win his home state on March 15.

Given the fact that Rubio's own campaign team has suggested the senator will be channeling his efforts into the Stop Trump movement, a different theory has been floated around as to who Rubio may endorse for the GOP presidential nomination. It would make the most sense for Rubio to back the second place Ted Cruz both in an endorsement and via the delegates that Rubio leaves behind in suspending his campaign.

Still, stranger things have happened when it comes to former Republican presidential hopefuls placing their faith in candidates who are still in the running. Based off of the previous war of words between Trump and Christie, no one could've predicted the New Jersey governor calling the Donald his friend again and essentially stating that Trump is the best hope for the Republican party. Christie's presence behind the frontrunner has been so explicit that he recently had to address claims that he was Trump's sidekick, so to speak.

Likewise, a Ben Carson endorsement appeared just as puzzling — especially when the retired neurosurgeon had lobbied so heavily against the divisive language that has made the Trump campaign a fiery force to be reckoned with. Carson's claim that he was reportedly offered a job for his efforts is not only problematic but partially sheds light on where his mindset was when he essentially did a political about face and came out in favor of the Donald.

Rubio may join the ranks of candidates who've deigned to support Trump. If he does look towards backing Cruz, however, he certainly won't be the first former candidate to do so. Carly Fiorina endorsed Cruz and has been just as adamantly against Trump as Rubio. Given the delegates he stands to give away, the Florida senator's endorsement decision means far more than just whom he'll be casting his ballot for. It may take a while before Rubio endorses anyone. The idea of him backing Trump is nonetheless still entirely plausible.