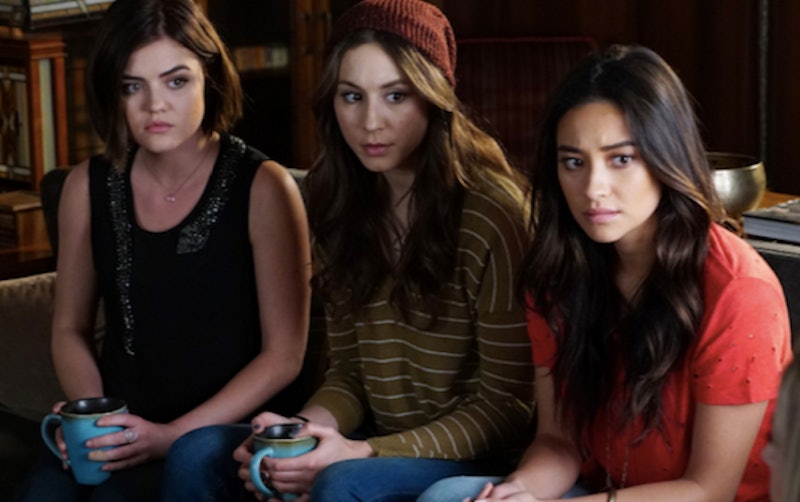 The Season 6 finale gave us a lot to think about. Not only was it revealed that Mrs. DiLaurentis has a twin called Mary Drake, but that Charlotte was actually adopted (hence where CeCe Drake's name came from). We also found out that, as could be guessed from his very first appearance on the show, Alison DiLaurentis's husband, Dr. Rollins, is working with Uber A. It seems as though he's got Alison exactly where he wants her, as she admitted herself into hospital at the end of the episode. So what does all this mean for the premiere of Season 7?

While A has always finished sentences with the word "b*tches", using it as an endearing term for the gang, Season 7 will be the first time the word has been used in an episode title. While the words "Tic Tock" could refer to so much — the amount of time the group have to save Hanna, the countdown until the police discover who killed Charlotte, the timer running out before Uber A strikes — using the word "b*tches" in the title like this seems to take the show in a bolder, more final direction.

It seems apt that, now that we're so much closer to finding out who Uber A is, the first episode after the reveal addresses the group in the very same way they've always been harassed — in a message calling them "b*tches." A is coming to the forefront now that the series has committed to its flash-forward concept, and it looks as though Season 7 will reveal all of the mysteries we're yet to find out.

Lucy Hale has hinted that Season 7 may be the end of Pretty Little Liars , but I. Marlene King has said that Season 8 is still a possibility. Either way, we're slowly heading towards the final conclusion of the show, if there can be such a thing, and there are sure to be more surprises along the way. With a title like "Tic Tock, B*tches," Season 7, Episode 1 is sure to stand out and be every bit as stressful as the Season 6 finale was. Fingers crossed that time doesn't run out on Hanna, because Pretty Little Liars would not be the same with Ashley Benson.