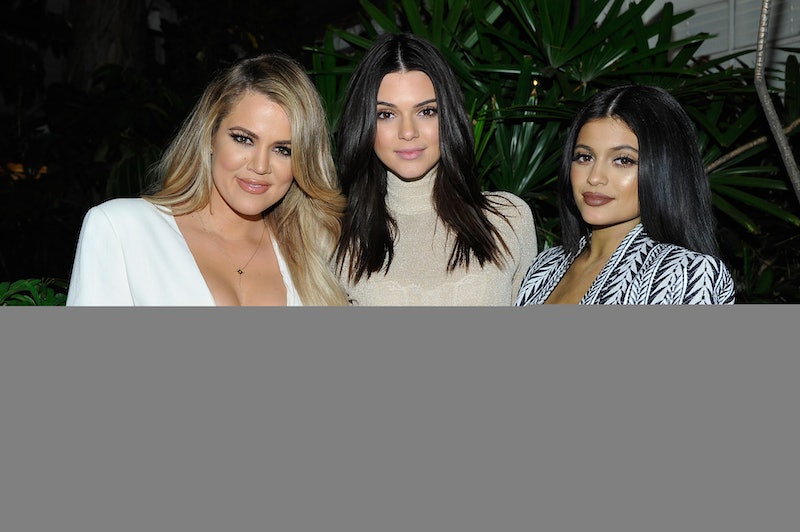 Kylie Jenner, Kendall Jenner, and Khloé Kardashian decided to shed their famous personas on Friday — at least for a few hours. More specifically, the Jenner and Kardashian sister wore some pretty wild disguises (i.e. a lot of prosthetic makeup) and decided to then partake in a Hollywood bus tour. As tourists. Thank the social media gods that Kylie snapchatted the whole thing because it's glorious, and kind of exactly what you need to get you through your day right now.

Kendall donned a prosthetic nose, freckles, and a long red haired wig. Kylie chose to rock some short bangs, ear gauges, and a pair of glasses. But the best of all was Kardashian, looking completely unrecognizable as an elderly woman. After telling the bus driver she was born in 1937, Kardashian really got into this role. She may or may not deserve an Academy Award for the performance, honestly — it's that good. Meryl Streep, watch your back.

You guys, the whole adventure was krazy, and exactly what you'd expect from a Kendall, Kylie, and Kardashian adventure. Take a look at the some of the most insane and hilarious moments below, and then feel subsequently bummed that you weren't there to experience it in real life.

1. When The Madness Begins

Can't get over how convincing these disguises are.

2. When Khloe Calls Her Family "The Kartrashians"

4. When The Guide Brings Up Tyga

And Kylie screams "That's not true!"

5. When They Get Found By The Paps

How did they know?!

6. And Have To Run Inside For Cover

7. When Khloe Really Gets Into Character

How is this Khloé Kardashian? Please enlighten me.

8. And Asks About Her Angles

I would watch hours of this footage.

11. When The Filter Goes On

So much overwhelming joy.

12. When Khloe Rips Off Her Fake Eyebrows

13. And Warns Kids Against Tobacco Use

14. When Kylie Takes Off Her Nose

Oh well, it was fun while it lasted.