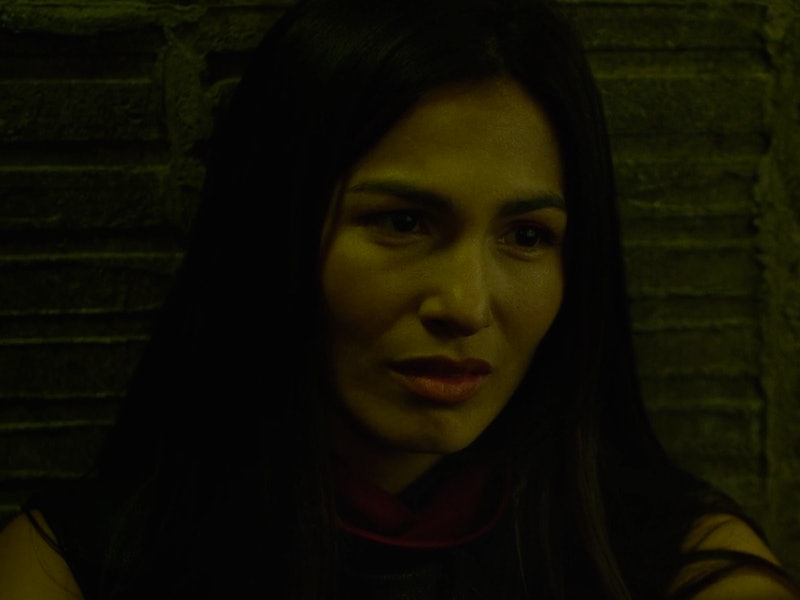 Spoilers for Daredevil Season 2 ahead. As quickly as she had reentered Matt Murdock's life, she left. Well, that's what it felt like when Elektra died at the end of Daredevil Season 2. Matt Murdock's ex-girlfriend had dropped by Hell's Kitchen to enlist Daredevil's help with the Japanese mob, but Elektra wasn't being 100 percent truthful and it turned out there was much more to her situation than he ever could've imagined. Still, none of that seemed to matter, as in the Season 2 finale, Matt confessed his love to Elektra and even promised to leave Hell's Kitchen for her. Unfortunately, a rooftop battle with the ancient warrior group the Hand went down moments after that and Elektra was killed in front of a devastated Daredevil. Yet, that wasn't the end of Elektra's story.

The very last scene of Season 2 showed the Hand placing Elektra in the large, stone urn that Nobu had been protecting — even after Matt and Stick had visited her grave. Since Stick told Matt that the Hand has discovered the secret to immortality through resurrection, is Elektra going to be brought back to life? Before Elektra died, the Hand had revealed that she is their mysterious weapon Black Sky, the entity that the Hand serves, in episode 12 "The Dark at the End of the Tunnel." So it would make sense that ancient warriors who rarely know defeat would be attempting to bring back Elektra, the most important figure in their cult, from the dead.

In most shows (other than Game of Thrones ), a resurrection storyline would sound completely ridiculous. However, bringing back people from the dead falls safely into the mythology established by Daredevil in Season 2. For instance, Nobu — the skilled fighter who was burned to death in Season 1 — was alive this season, much to Daredevil's surprise. When Daredevil asked him about his death, Nobu responded by saying "there is no such thing" and Elektra talked about rumors of Nobu living three lifetimes. Because of Nobu's multiple lives and the fact that Elektra is Black Sky, all signs point to Elektra being resurrected on the Netflix series. Yet, that doesn't necessarily mean it will be a good thing.

The urn that Elektra was placed in by the Hand had been protected by Nobu for an important reason. Young people's blood had been feeding into this urn through tubes and this sick scheme by the Hand will deal with more than just resurrection. As Stick referenced in episode eight "Guilty as Sin," the Hand has never "activated" a Black Sky before. Since the Hand had taken Elektra's body from the grave, perhaps the Hand is "activating" Elektra as its Black Sky by placing her in the urn. While Nobu accidentally killed Elektra when she saved Daredevil, that doesn't mean the Hand couldn't benefit from this mistake by bringing back Elektra as a cooperative Black Sky. If that's the case, there is no knowing what Elektra will arise from that coffin/urn — most likely an Elektra of only vengeance and hatred that will fuel the Hand.

While Matt had a way of tapping into Elektra's humane side, her backstory of training with Stick as a child showed that she has a long history of being unable to control her urge to kill. If the Hand successfully "activated" her by bringing her back to life and making her Black Sky, then she will be one of the most powerful forces of evil that Daredevil has ever faced. However, the storyline of comic book Elektra does offer a bit of hope.

Although her story was changed in some aspects for the series, including the whole Black Sky plot, the Hand does attempt to resurrect Elektra in Marvel comics. (Here is where the Daredevil universes of comics, film, and TV get a bit intertwined.) In the comics, Elektra was killed by Bullseye — the same assassin who killed her in the 2003 Daredevil film. In the 2005 Elektra film, she is resurrected by Stick, but the comics tell a different tale.

The Hand in the comics, like the series, also try to resurrect Elektra, but they are thwarted by members of the Chaste. She is eventually brought back to life by Stick's best pupil Stone after Daredevil had tried to revive her himself. Daredevil's attempt, since it was based out of love, made Elektra pure in her rebirth and a "good guy" for a bit. While that purity didn't completely last, the comic book version of resurrected Elektra is much better than her being reborn to become Black Sky for the Hand.

No matter what type of Elektra comes out of her rebirth, I do believe that Daredevil will bring back one of Matt's most important loves and foes. And while part of me hopes she'll be resurrected to help fight the Hand and maybe rejoin forces with Daredevil, actor Élodie Yung sure does excel at playing an antagonist and she'd be a powerful addition to the Hand.