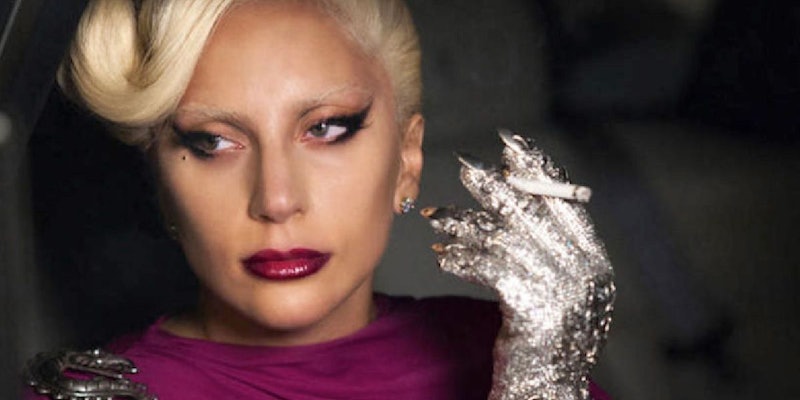 If there's anything more terrifying than watching American Horror Story itself, it's speculating over what each new season's theme is going to be about. Sometimes, just mulling over the idea of a topic lets the mind wander just a little too far — especially when all that fans have been told is extremely vague. While AHS creator Ryan Murphy has yet to release the exact title and concept for Season 6, he seems to be dropping clues that are just as bad for us over-thinkers. And, to make matters worse, American Horror Story Season 6 spoilers indicate that it will include two terrifying concepts in one.

“The interesting thing about this season is we’ve been working on two ideas at once, which we’ve never done. So I don’t want to say what it maybe is…" Murphy shared at Sunday's FX PaleyFest panel, "Both things that we’re writing right now – we haven’t declared a winner – will have a different form, so we’re excited about that. We’ll talk about it soon, but we haven’t landed on it yet.” As exciting as the idea of two concepts merging into one season is, it also happens to make things a whole lot more complicated. Especially since it was confirmed to the Television Critics Association in January that Season 6 will also be spanning two different time periods but remain "principally in the present."

However, at March 20's FX PaleyFest panel, Ryan Murphy was also sure to not leave us completely dumbfounded over what the two different themes over two different time periods might be. In fact, the hint he has given us is exactly along the lines of what fans were thinking (and fearing). Season 6 is going to include a ton of children. “If you look at horror tropes, the innocence of children, that sort of wide-eyed entryway into some world is always very dramatic and satisfying,” he disclosed. Basically, you probably won't want to be heading to work at a daycare center after watching this season.

In the history of horror films, children have proven to creep us out in more ways then one. In fact, some of the classic bone-chilling children that come to mind include the Grady twins from The Shining, the cult of children from 1984's Children of the Corn, and, of course, the famed little girls from movies such as The Ring, The Sixth Sense, and The Exorcist. However, one of the most popular horror-inspired themes that fans are considering is directly connected to the creepy concept of a children's boarding school. Because, well, what's more creepy than a bunch of kids living and learning amongst each other in the same uniform? Between uniforms and twins to dolls coming to life (Annabelle anyone?), it's hard for us to really be sure of what "children" could mean in the theme. At this point in time, the door is just too wide open.

There is one thing we are sure of at this point. It seems as if every past character who wants to be in Season 6 is fine by Ryan Murphy. Lady Gaga is confirmed to be returning, and Murphy has expressed an otherwise open invitation to anyone and everyone. But, if children are the focus, then we can also expect a slew of new younger actors entering the horror genre scene.

Unfortunately, the theme isn't exactly be set in stone, and neither is the show's official release date. So bring on the children-themed nightmares until we even know what kind of darkness we are heading towards. No matter what, I'm sure that Season 6 is going to be yet another bone-chilling adventure.