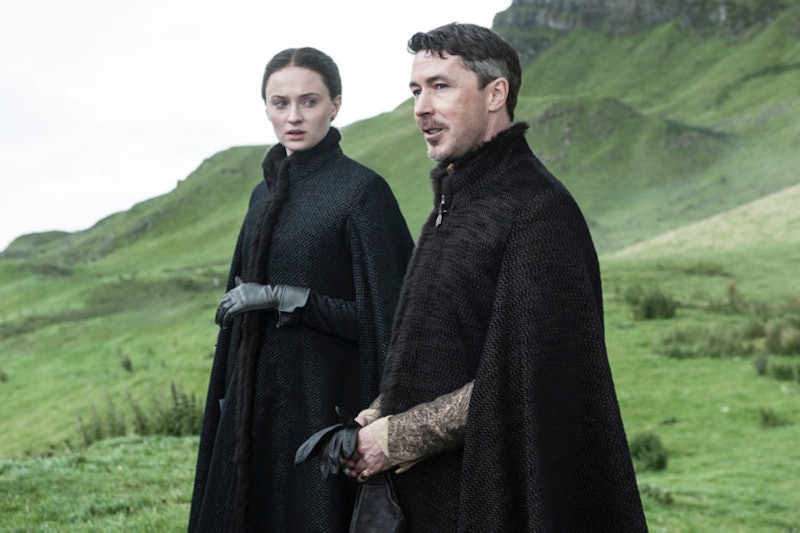 As the Season 6 premiere of Game Of Thrones inches ever closer, it's important to brush up on the details of the past five seasons. Though there are only fifty episodes over the five seasons, there are so many characters, alliances, deaths, strategies, loyalties and schemes to recall. But there's one crucial things to remember, even more important than the characters' names: how the War Of The Five Kings began, and by whose hand.

It wasn't the vicious Lannisters, though Cersei certainly is a skilled player in the game. It was a little man named, you guessed it, Littlefinger who started the whole damn thing. The skinny dude with the creepy facial hair was indeed the architect of the entire War, which is revealed in Season 4, episode five, "The First Of His Name," in a very uncomfortable scene with slimy Littlefinger and icky Lysa Arryn, who is his biggest fan.

But who even is Littlefinger? "Lord" Petyr Baelish is a garbage person, but in the realm of Westeros, that's who wins. Because he plays dirty, and he's an evil genius. Littlefinger is the last remaining member of House Baelish and comes from humble beginnings. His great-grandfather was a sellsword from Braavos who came to the Vale. His father was a knight who had a good relationship with Catelyn and Lysa Tully's father, Huron Tully, who took Petyr in when he was just eight-years-old. He was teased for being scrawny, and got the name from his size and the humble land he came from.

Petyr fell in love with Catelyn, who obviously was too good for him and rebuffed his advances. Though she considers him a close friend, almost a brother, Petyr Baelish feels like he was forever friend-zoned by Catelyn. Lysa, on the other hand, was totally in love with Littlefinger, making her the perfect accomplice for his manipulation. You almost feel bad for her, but not quite, because as the show has demonstrated, she's clearly off her rocker.

Let's rewind and look at Game Of Thrones backstory, specifically the death of the Hand Of The King, Jon Arryn, also known as the unfortunate husband of Lysa Arryn of the Eyrie. Jon Arryn died from poisoning, and the Lannisters (especially Cersei, who, for once, isn't the villain) were suspected of killing him. But in Season 4, episode five, it's Lysa Arryn who reveals that it was Littlefinger that convinced her to poison her husband, with the promise that they would one day marry and rule the kingdom together. Gross. But even as creepy as Lysa is, she didn't deserve what Littlefinger did to her (admitting he used her, never loved her, then pushed her out the Moon Door. Way Harsh, Petyr.)

So it turns out that Baelish is directly responsible for the death of Ned Stark, who was disturbed by Jon Arryn's death. He investigated, and eventually revealed he believed that Robert Baratheon was not the father of Joffrey, but rather Jaime Lannister. In one of the most painful scenes from the entire series, Ned Stark is beheaded for treason, and thus begins the War — exactly as Littlefinger wanted.

So even though it seems like the players are characters like Jon Snow, Daenerys, and Bran Stark, Lord Petyr Baelish is also among the most important. As is his foil, Lord Varys, the Spider. Though they both have a lot of power, clout and spies, their goals are totally opposite: Varys is interested in having a ruler in the Iron Throne who will bring order and maintain peace to the kingdom. Which is why he schemed to unite Tyrion Lannister with Khaleesi in Season 5.

But Littlefinger just wants money and power, in no particular order. He made a name for himself as Master of Coin and the proprietor of several brothels, and his consult is valued in the Seven Kingdoms, even though he's always a traitor.

In Season 5 Littlefinger and Sansa, who helped him escape judgment at the Eyrie by lying for him as a witness and saying that Lysa committed sucide, travel to what Sansa thinks will be the lands where Baelish is from. To no one's surprise, horrible Baelish instead takes her to Winterfell, and Sansa realizes with horror that he wants to marry her to the despicable Ramsay Bolton. His family brutally murdered hers, and she is horrified — but Littlefinger insists it's all a part of the plan.

Then, he leaves her at Winterfell and goes back to King's Landing, where he convinces Cersei to gather the troops and march on the north. Then, in another twist, we learn that it was Littlefinger colluding with Olenna Tyrell, Margaery's grandmother, who was responsible for killing Joffrey as well.

So who will Littlefinger murder in Season 6? Only time will tell, but he's definitely continuing on his creepy, murderous path. He could be one of the last men standing; let's not forget, he started the game.