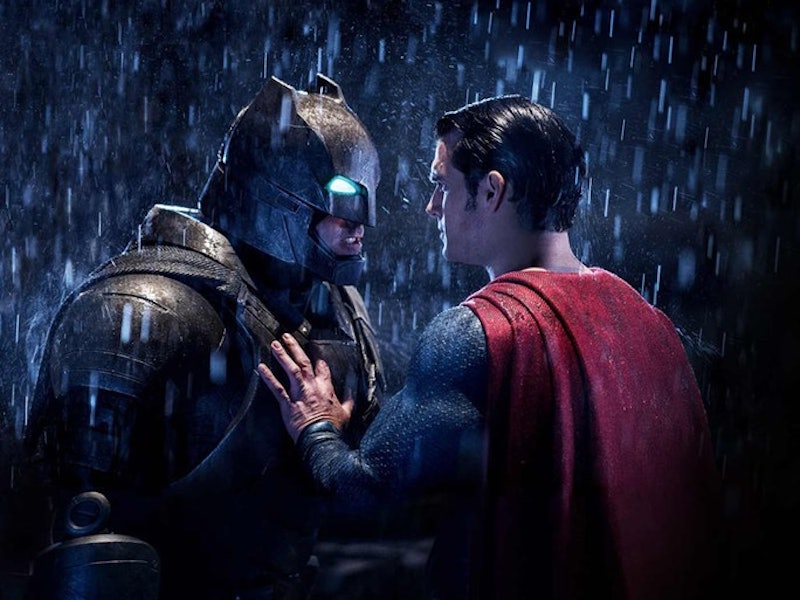 2016 is shaping up to be the year of superhero-on-superhero violence. First, Batman and Superman go head to head in Batman v Superman: Dawn of Justice in March, only to be followed by an Iron Man vs. Captain America showdown in May's Captain America: Civil War . With heroes fighting each other left and right, what is a mere mortal to do? Pit them against each other, of course. Batman v Superman and Civil War might be able to answer the questions of who would win in a fight for each group — Batman vs. Superman and Iron Man vs. Captain America — but what about Batman and Superman against Iron Man and Captain America? And what about the fights themselves? Will one be more epic, or more destructive than the other?

It's hard to tell. Comparing the superhero battles in Batman v Superman and Civil War isn't easy, but then again, nothing worthwhile ever is. Using everything known about Batman, Superman, Captain America, Iron Man, previous Marvel and DC films, and all the little details glimpsed in the trailers for both films, you can make a solid attempt at determining which hero group comes out on top. Let's see which battle is bigger, badder, and more super by analyzing five different qualities — Batman v Superman versus Civil War style.

Man of Steel saw the complete and utter destruction of Metropolis. Buildings toppled and the city was nothing but a pile of dust when Superman finally defeated the villainous General Zod. In trailers for BvS, it seems like Superman might have learned his lesson. He and Batman are shown fighting in what appear to be abandoned buildings and empty streets, suggesting minimal damage to city structures. Similarly, Civil War's Captain America and Iron man are seen facing off on an empty airport tarmac. Despite the look of things, though, I'm willing to bet that the Batman v Superman battle will be more costly, both in human lives and property destruction.

It's tough to say what will cost more: replacing those airplanes in Civil War or rebuilding all the destroyed property in Batman v Superman. My money's on BvS having a more destructive battle. After all, they don't just have themselves to worry about — who knows what kind of damage Lex Luthor can do?

Man of Steel, the predecessor to Batman v Superman, set a whole new record for number of civilian casualties in a superhero film. It turns out that alien forces descending on Metropolis is pretty dangerous and, in many cases, fatal. Though the film tried to hide most casualties under piles of rubble, Watson Technical Consulting, at Buzzfeed's request, estimated that the battle of Metropolis would have resulted in around 129,000 deaths, with 250,000 missing and one million injured.

In comparison, the entire final battle of Avengers: Age of Ultron was complicated by Captain America's insistence that all civilians be evacuated from the battle ground. Furthermore, it appears that there won't be a real villain in Civil War, with the main conflict resting between Iron Man and Captain America. In other words, there might not be a mad man threatening the lives of innocent people. In BvS, however, Lex Luthor plays a big part, and we all know he doesn't really have the highest regard for human life. Once again, I'm saying Batman v Superman will have the greatest loss of life.

Captain America might wear the stars and stripes, but his first mission as a superhero took place overseas during WWII. He's a global presence. Superman is an alien, capable of flight, and yet we haven't really seen him as an international figure yet. We didn't see him fight any international crime in Man of Steel, and it's likely that Batman v Superman will only expand that universe beyond Metropolis to go to Gotham, not another country. It's also true that the events in Civil War that cause the rift between Captain America and Iron Man were foreign events taking place in the fictional country of Sokovia. So, in terms of the possible global impact of the superhero vs superhero fights, it's clear that Captain America vs. Iron Man will have more of a world-wide effect.

BvS is bringing a new Batman to the big screen and, more importantly, is introducing Wonder Woman prior to her big solo movie. No matter how groundbreaking and exciting Batman and Wonder Woman's presence might be, the fact remains that the battle in BvS will only feature about one fourth of the superheroes fighting in Civil War, which will introduce Black Panther and a new Spider-Man. (This is not including the rumored cameos from Aquaman, the Flash and other DC superheroes not yet confirmed in Batman v Superman.)

Which fight has more passion? Or, in other words, which superhero pair hates each other more? This one's easy: it's Batman and Superman, who are fighting essentially because Batman hates Superman. Captain America and Iron Man, on the other hand, are fighting due to a disagreement on principles. They are friends who find themselves on the opposite sides of the debate on registering superheroes, not sworn enemies. In terms of which battle has the most bad blood, it's BvS, hands down.

With three out of five categories dominated by Batman v Superman, the winner here is obvious. The superhero battle in BvS will be the biggest and angriest of the two, though I guess that might not be a good thing. Good luck rebuilding, Metropolis and Gotham!