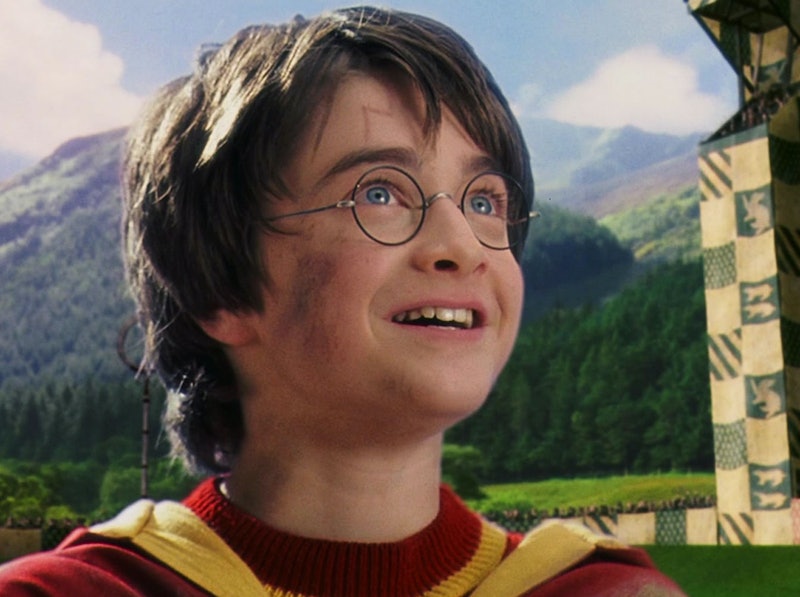 Is there such a thing as loving Harry Potter too much? If you just laughed for five straight minutes at the ridiculousness of that question, took a swig of Butterbeer from a HP-themed mug, and then went back to a simultaneous Harry Potter film AND book-reading marathon… but go on, continue about your business. You’re doing things right.

Because anyone who has read Harry Potter knows that it’s more than just a set of seven well-written books. It’s a series that can take people who previously “hated reading” (I can barely type those words) and allow them to actually enjoy it. It’s a film franchise that gave you butterflies every time you heard “Hedgwig’s Theme” and saw the Warner Bros. logo. And it’s a story that can lift your spirits with the age-old theme of good versus evil.

Of course, once you’re all aboard the Harry Potter fan train (aka the Hogwarts Express), there are some signs that maybe you’ve ridden it a bit too far. If you can identify with these signs, you are probably fully obsessed with the Boy Who Lived. Not that I’m telling you to stop… if you want to, you go ahead and ride that train all the way to Hogwarts.

You have a lot of house pride for someone who never actually attended Hogwarts, and feel very strongly about whatever house you just KNOW you'd be in. And when you meet someone new, you can't help speculating which house they'd be sorted into...

Maybe you signed up just for the sorting, or you really wanted to read the extra info about the world of Harry Potter... either way, you have more than one Pottermore account. Because obviously you had to be sorted several times to make sure the hat was right.

You Once Mailed Yourself A Hogwarts Letter

Whether you did this on your 11th birthday, or your 21st, you couldn't help creating a handwritten Hogwarts letter. Just for fun. Because it's not real. Hahaha... *crying*

You Own A Wand And Other HP Merch

Even though your dad lamented that you were paying big bucks for a common stick, you went ahead and got that wand anyway. It fits in nicely with your Harry Potter room full of merchandise. I mean, your bedroom.

Maybe it was a disaster. Maybe the pumpkin pasties did NOT turn out and the Butterbeer recipe was a bit too sweet and butter-y. Still, you have a Pinterest board full of Harry Potter-themed recipes, and by golly you're going to try them all.

For Every Holiday And Birthday, You Give (And Receive) HP-Themed Gifts

It's not hard for people to know what to get you for a gift: all they have to do is get on Etsy, type in "Harry Potter," and buy whatever pops up. After all, that's how you complete all your shopping when you're buying gifts for them.

You Have Very Strong Opinions About The Films

Whether you love 'em or hate 'em, you have strong opinions about each of the films. But you still went to every premiere, obviously.

Halloween! Theme parties! Thursdays! So many opportunities to break out your HP-themed costumes, and you never miss one.

"Well, he's a Hufflepuff, so he FINDS this very fascinating."

You Cyberstalk All The Actors From The Films

Maybe you loved the films. Maybe you hated them. Maybe you just wish they had made them all 15 hours long so they could fit in all the details from the books. Either way, you periodically cyber stalk all the actors involved and see every film they've been in since HP ended.

You Have A HP Tattoo

You decided to make the Unbreakable Vow with the book series by actually inking it onto your skin.

Your Copies Of The Books Are Falling Apart

Some people think the sign of loving Harry Potter is keeping the book series in pristine condition, but you know the truth: the sign of a truly obsessed HP fan is a series that's falling apart, taped together, with extremely worn pages, because that's how you know it's been read over and over again.

You Can Rattle Off Your Favorite HP Quotes By Heart

You don't have to consult the books when someone asks for your favorite HP quote... you know it by heart. And it's probably framed in your room somewhere as well. (Side note: whenever someone says the words "how many are there?" it's necessary to reply with "THIRTY-SIX BUT LAST YEAR LAST YEAR THERE WERE THIRTY-SEVEN").

If Someone Says They Don't Like HP You Get Very Confused

Is this a thing? Do people say this? But they're joking, right?

That quiz doesn't exist for you. Any HP trivia quiz is a piece of cake. Like the kind Hagrid baked for Harry's 11t birthday that you tried to replicate and failed, but it tasted OK.

When You Hear The Word "Always," You Tear Up

THE SERIES WILL ALSO BE WITH YOU ALWAYS.

You're Secretly Jealous Of People Who Haven't Read It

...because they still get to experience reading the series for the first time. Lucky them.