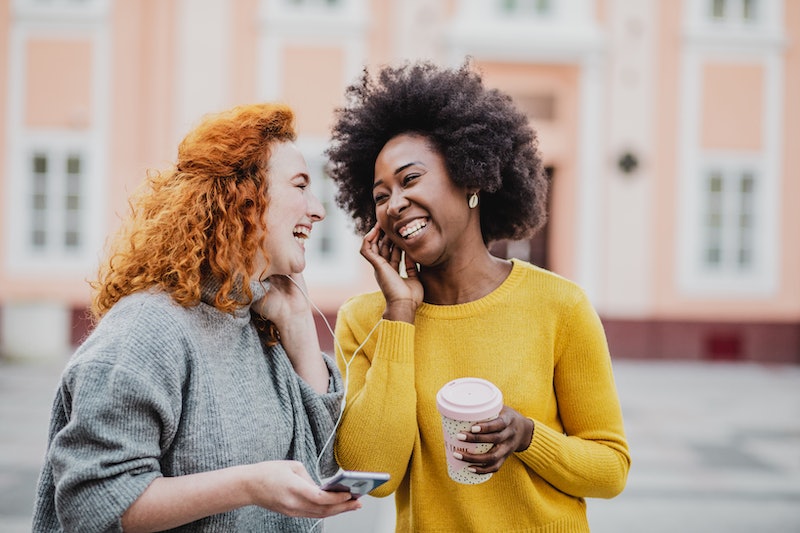 If you spend even half as much time on the Internet as I do, then you've undoubtedly come across dozens of articles examining what it's like to be an introvert or an extrovert. I've written about the importance of embracing your introverted nature before, and I did this primarily because I've always considered myself an introvert. Lately, though, I've been wondering if I might actually be an ambivert — a person whose personality features a fairly balanced mix of introverted and extroverted elements. Moving to NYC has helped me realize that maintaining the right balance of alone time and socialization is crucial for my mental health. I've also been wondering because, statistically speaking, most people are ambiverts, whether they realize it or not.

As Huffington Post reported back in July of 2015, two-thirds of people are actually ambiverted. Ambiverts are energized by alone time, but too much of it can make them feel like Tom Hanks' character in Castaway. So, if the thought of going out two nights in a row exhausts you, but you need friend time every couple of days to keep from feeling antsy, you might not be as introverted as you think you are.

Obviously, whether you're crazy introverted or a super duper extroverted doesn't really matter, as long as you're happy and taking good care of yourself. That said, if you think you might be an ambivert, here's a few ways you can tell for sure:

1. You're Good At Small Talk, But You Don't Really Like It

Though ambiverts aren't intimidated by small talk the same way introverts often are, they typically don't enjoy it because it can seem disingenuous. So if you're good at small talk — but you can only manage to feel genuinely excited about light conversations when they seem like they're leading to deeper, more meaningful ones — that's a pretty good indicator that you're not actually all that introverted.

If you've noticed yourself becoming increasingly indecisive lately, that could actually be a sign that you've been too stressed out for too long, and that your stress is now turning into depression. However, if you've pretty much been indecisive for as long as you can remember, this might just mean you're an ambivert.

Making decisions can be super taxing for ambiverts because ambiversion and overthinking go hand in hand. For ambiverts, coming to a decision about anything even remotely serious often requires pros and cons lists, advice from friends and family, and lots of self-reflection.

I can definitely say I've noticed this trait in myself. I don't think I've ever broken up with someone — or even dyed my hair! — without going through all the aforementioned decision-making steps. If you can relate, then it's quite possible you're an ambivert.

3. You Enjoy Listening To And Observing Others...

As we've established, ambiverts aren't particularly afraid to engage in conversation. That said, just because ambiverts can be talkative doesn't mean they always want to be. If you prefer to listen to other people talk just as much (and sometimes more) as you like to talk yourself, that may be a pretty clear sign that you're an ambivert.

Also, if it's not uncommon for you to find yourself perfectly content to play the role of "quiet observer" at a party, but it has nothing to do with feeling shy or awkward, that's another sign that your perceived introversion is actually ambiversion.

4. ... But You Also Like Telling Your Own Stories Sometimes

If you sometimes enjoy being the center of attention just long enough to tell one of your awesome and/or awesomely-horrible stories, then you're probably not a total introvert. This doesn't mean introverts can't ever muster the courage to assert themselves into storytelling situations, and it doesn't mean ambiverts don't ever shy away from the spotlight, either. But if you sometimes feel invigorated to be the person everyone is focusing on, you're definitely not 100 percent introverted.

5. If You're Hanging Out With Someone Shy, You Have No Problem Being The Outgoing One

If you have no problem taking on a more outgoing and assertive role when you're hanging out with a shy friend, but you're generally more reserved when you're out and about with one of your louder buddies, then you're likely an ambivert.

Ambiverts are intuitive, which means they're usually pretty good at picking up on other people's signals and adjusting their own personalities accordingly — without being disingenuous about it. This ability to genuinely maintain a flexible personality is what psychologist Dan Pink refers to as "ambivert advantage." This is part of the reason why ambiverts are typically good at sales, and it's also part of what makes them such good friends to have. lf you're an ambivert, it's probably not difficult for you to read how your friends are feeling, and it's probably easy for you to balance out their personalities by being flexible with your own.

6. People Can't Decide If You're Introverted Or Extroverted

If you've been called an extrovert and an introvert at different times throughout your life, and you yourself aren't even 100 percent sure which category describes you best, you should know that's probably the No. 1 indicator that you land somewhere in between. Not unlike so many other aspects of individuality, for most people, introversion and/or extroversion is more of a spectrum situation than a concrete label.

7. You Need Alone Time, But Too Much Of It Makes You Feel Unproductive

As you might already know, introverts are energized by alone time, extroverts are energized by socializing, and ambiverts require a balance of the two. Of course, this doesn't mean introverts never want to spend time with their friends, and it doesn't mean every single extrovert can't handle the occasional night to themselves, either. What it does mean is this: If you're perfectly content to spend your weekends logging in solo downtime, but some of the best weekends of your life were spent partying with friends, then you're probably not as much of an introvert as you thought you were. Actually, it sounds like you're an ambivert, and that's awesome.