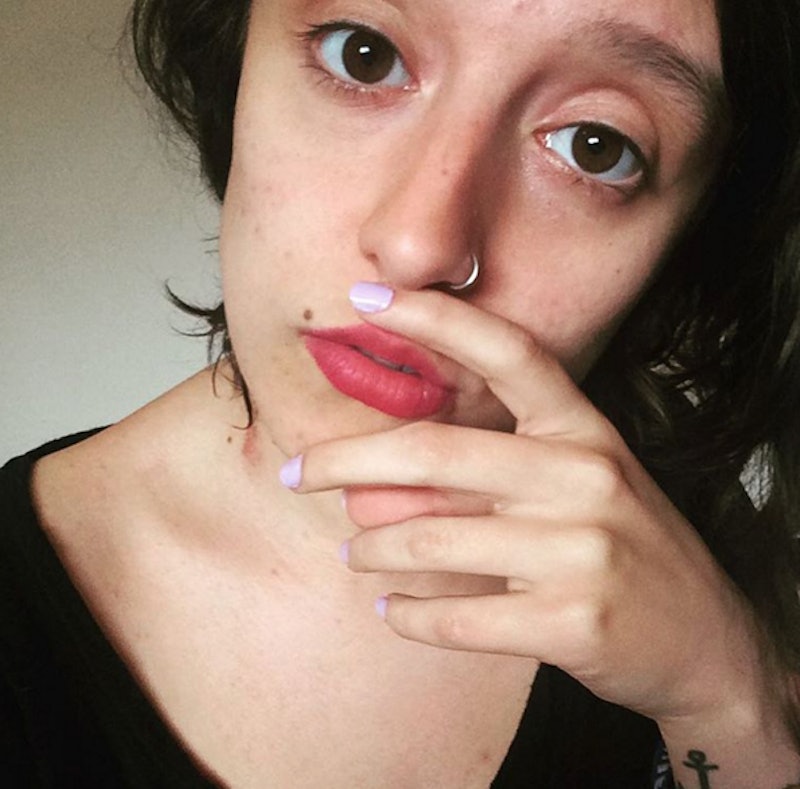 For years, my nude body was a thing of terror and shame, made up of ugly limbs and invisible scars that I truly felt cast a shadow over my entire form. Only recently have I begun to break that pattern of thinking, much of which was a result of being sexually assaulted when I was 19. And being able to break that pattern was thanks in part to body positive acts like taking nude photos of myself. Despite criticism from those who seek to devalue such practices through slut-shaming, I can attest to the fact that taking nude photos has been a very valid form of empowerment for me. Documenting my naked body has shifted the way I think of myself by transitioning said body from a place of trauma and devastation to empowerment and beauty. All with a simple snap of a perspective-altering photo.

When Kim Kardashian recently shared her latest nude selfie, and the Internet exploded with many unwelcome opinions about the repercussions this image could have on her family and on the self esteem of other young women, I was mad. I was mad that in the year 2016, it's still acceptable to slut shame women for celebrating their bodies. I was mad that it's still so common for mothers to be de-sexualized. Above all, I was mad that autonomous nudity cannot seem to be accepted by the mainstream as a valid form of empowerment. After violent acts took me out of my body, taking nude selfies helped me become one with that body again. That makes their importance indisputable to me.

Yet legions of people on social media did dispute that, firing back against Kardashian's selfie with seeming self-righteousness. Numerous humans of all genders and backgrounds, including celebrities like Zayn Malik and Chloë Moretz, made the argument that sharing your nude body on the Internet is only one form of empowerment, and that there were many better ways to express liberation and self-love. Various others made suggestions about more wholesome or intellectual ways to find self-actualization, moving away from any expression of feminine sexuality. Those critiques are likely valid for some, but what if sexuality, in and of itself, is what makes someone feel empowered? Perhaps dancing topless and snapping pics of their labia are things that allow some folks to feel free and whole.

I believe that the critics in this case are concern trolls, in a sense. Hyper-sexualization and objectification of women is certainly a contemporary issue (and has been for a long time), and can lead to all kinds of nastiness, like rape culture. However, choosing to exercise ownership of your sexuality, or to be sexy and partially nude in public spaces without having to answer to anyone else, isn't the same thing.

Embracing nudity for purposes of empowerment is all about taking back autonomy of an image that is so often controlled by social structures. In my case, and undoubtedly in the cases of many others, snapping nudes is a way of taking back ownership over my body from my abuser.

When I was assaulted, I became pretty afraid of my sexual body, unable to see my bare flesh or have sex without the nerve-wracking thought that I would somehow be subjected to physical pain again. Even looking in the mirror while naked felt violating, as if the confines of my skin and my bedroom weren't safe. His touch covered my entire body, preventing me from embracing a sexuality that was once came so naturally to me.

I wanted so badly to stop hiding myself behind layers of clothing. I decided that taking a nude photo and sharing it with others (specifically my friends and other loved ones) could be a great step in achieving a sense of body positivity. But because of all the sexuality that's implied in such photos — sexuality that seems to be constantly interpreted as something for the viewer alone — the idea felt too terrifying for a while. The last thing that I needed in my journey was to feel vulnerable again by non-consensual sexualizing of my nude form.

I did it anyway, though. And sharing these photos (which I took with my adorable pet rat for added moral support) with only a roomful of friends did wonders for my highly sensitive self-worth, delivering exactly the amount of empowerment and healing I had been searching for. My friends complimented me, congratulating me on my bravery sans any sexually inappropriate talk from masculine pals. I felt safe, free, and happy that I had found yet another method of strengthening myself. It was a method that ultimately led me to comfortably lay around naked and have less inhibitions in my sex life.

Documenting and sharing my nude body with others is certainly not something I do for attention, or for the benefit of others. If people could stop judging the decisions of those around them, and consider the different histories that we all have with sexuality, trauma, and our bodies, they may come to realize that embracing one's nude form has the potential to set some people free from sexual exploitation and abuse. And even though she may not have a history that reads exactly like mine, Kim Kardashian's nude selfie set a wonderful example for women who struggle with accepting their bodies, like herself. She also sets a great example daily in the way she empowers herself through motherhood, as well as by becoming an independent and powerful businesswoman in a male-dominated media scheme.

Like Kim K, I love showing off my nude form. But I empower myself in other ways, too. I empower myself emotionally by going to therapy, sharing my feelings with the Web, and communicating openly with my partner. I empower myself physically by doing yoga, and gifting myself with as many wild-colored lipsticks as possible. I empower myself intellectually by staying well-read and always discussing ways to acknowledge and dismantle racism, ableism, sizeism, and transphobia around me. And I empower myself from the memory of my assault through celebrating my nude body and sexuality in as many ways as I can.

None of these things are more or less important than the others, nor are they up for debate. What I do with my body is my own business, and I resent being slut-shamed for it when the very person who hurt me and caused me to fall out of step with my body called me a "slut" as well. If people could learn to consider everyone's unique history and perceptions before lashing out every time feminine celebrities share a nude pic, chances are they'd realize that many of those people aren't trying to gain anyone's approval or attention. They're just connecting to their bodies and selves.