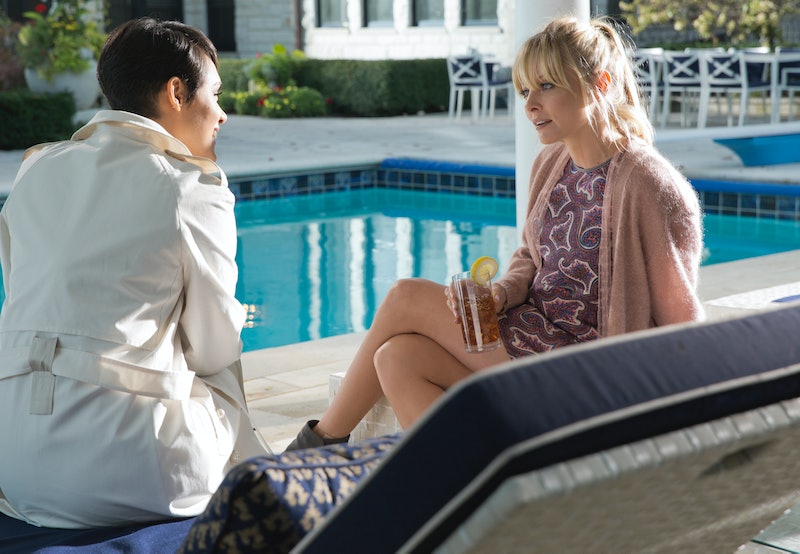 Empire has tackled some tough topics in its one-and-a-half season tenure, but it mixes them in with the perfect amount of drama and music. Sure, the music is great, but part of the fun is seeing what crazy stuff is going to go down in the next episode. One of the most intense scenes of the midseason finale saw Rhonda, Andre’s pregnant wife, get pushed down the stairs. Last we saw her, she was bloody and broken on the floor of the foyer. The question is this — who did it? Did Anika push Rhonda down the stairs on Empire ?

Anika has been slowly growing more unhinged over the course of Season 2. In Season 1, she was happily engaged to Lucious Lyon, head of A&R at Empire Enterprises, and living the dream. It was so good that you know it had to hit the fan sooner or later. By Season 2, Anika and Lucious split because he cheated on her, Anika left Empire Enterprises for the same reason, and Anika hooked up and began a weird relationship with Lucious’ youngest son, Hakeem. You can imagine how unhappy she was when Hakeem ended things because he was falling for Laura, especially because Anika is pregnant with Hakeem’s child.

So what does one do when pregnant with the child of your ex-fiancé’s son? If you were thinking, “stalk the family even more,” you’re correct! And I think that Anika took extremely drastic measures to eliminate any threat to her staying in the good graces of the Lyon family. Here’s why she has to be the person who pushed Rhonda.

Killing your ex-boyfriend’s unborn nephew wouldn’t seem like a great way to win him back, but Anika’s not exactly thinking rationally here. To her, giving birth to Lucious’ first grandchild and Hakeem’s first child may seem like a way to show them both how dedicated she is to them. Scary, but true.

Rhonda & Andre’s Baby Was Too Big A Threat

Yes, I realize we’re talking about a grown woman who is threatened by a fetus, but it makes sense in Anika’s unstable mind. She’s been kicked out from the Lyon family, and she knows how excited Lucious is about his first grandchild — Rhonda and Andre’s, that is. How do you make Lucious excited about her baby with Hakeem in her point of view? Make it the first grandchild and heir to Empire.

I'm convinced that Anika pushed Rhonda down the stairs on Empire, but to find out if my theory is correct, we'll have to keep watching Empire Season 2 when it returns on Wednesday night.

More like this
Gabourey Sidibe Wore A Traditional West African Wedding Dress On The Cover Of Brides
By Dominique Norman
Kaley Cuoco & Tom Pelphrey Just Made Their First Public Appearance As A Couple
By Hugh McIntyre
'Ghost In The Shell: SAC_2045' Was Only Supposed To Last Two Seasons
By Kadin Burnett
What’s New On Netflix: 'Stranger Things' & 'Somebody Feed Phil' Return
By Arya Roshanian
Get Even More From Bustle — Sign Up For The Newsletter