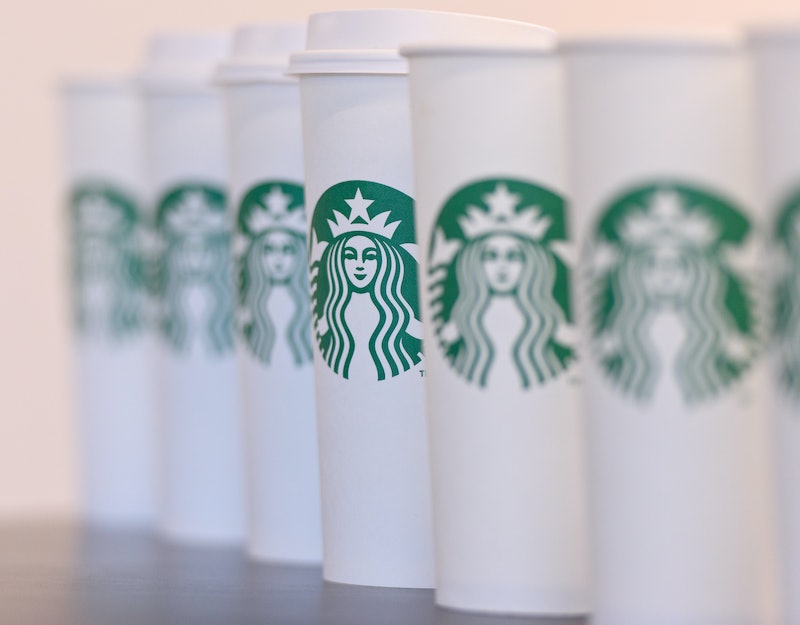 UPDATE: A spokesperson for Starbucks confirmed to Bustle that the Starbucks Wine Fraggino was available at one location in Japan for a single day; it was meant to celebrate the opening of the Starbucks Evenings store in Tokyo's Marunouchi district on Wednesday, March 30, 2016. As it was a limited offer, the drink is no longer available.

I awoke this morning to news of one of my favorite caffeine giants branching out in a new and exciting way, so my day is off to a good start: Starbucks Wine Fragginos are a thing... but there are some caveats: They were only served in Japan, for one day only, and that day has already passed. Important to note is that the beverage is not a Frappuccino; Frappuccinos have a base of coffee and/or creme. According to Rocket News, the Fraggino is made out of a Hokkaido blueberry wine and ice. It went for about $8 a pop, which is more expensive than your standard coffee drink; however, the jump in price is also probably to be expected, given that alcohol tends to cost more than caffeine.

The drink is part of a larger and newly launched "Starbucks Evenings" store in Japan. We have a similar concept here in the United States; the difference, though, is that the U.S. version kicks in at about 4 p.m. at specific, participating Starbucks locations. This Starbucks Evening is actually an entire store devoted to the concept — the first of its kind in Asia. Along with the Wine Fraggino, customers will also have the chance to enjoy cheese boards, tarts, and other adult beverages. According to Rocket News, the grand opening of this Starbucks Evenings store occurred on March 30, 2016, in the Marunouchi district in Tokyo. A Starbucks spokesperson confirmed to Bustle that, since it was a one-day offering, the Wine Fraggino is no longer available.

Previously, Japan has dabbled in the fine art of a grown-up Starbucks with the specialty cafes referred to as "Inspired by Starbucks." These unique locations forgo the iconic green-and-white mermaid logo for a much warmer, muted appearance. Inspired by Starbucks relies on a more neighborhood-style feel with soft brown hues, wood interiors, and cozy furniture. They serve various kinds of alcohol, along with all sorts of yummy snacks.

Fingers crossed that the Wine Fraggino makes its way to the states. The Vegas climate where I live is hot and dry — I would definitely appreciate this frozen refreshment.