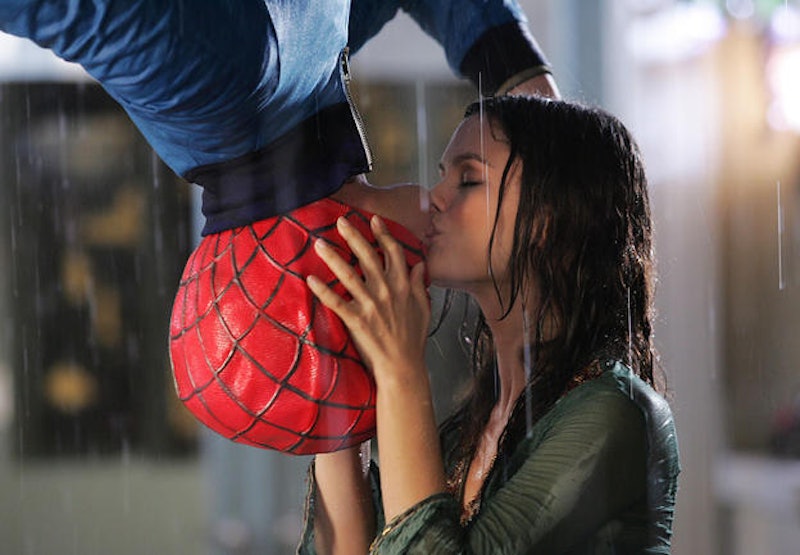 When it comes to the all-important question of which TV boyfriends you still have a crush on, there are plenty of heartthrobs from the '90s and '00s to choose from. Some, like most girls I went to middle school with, are camp Seth Cohen and Summer Roberts from The O.C., which I get: After all, who wouldn't like a cute, cardiganed man who seemingly appeared out of nowhere and wants nothing more than to draw you and impress you with his avant-garde taste in indie rock? But if you're anything like the rest of the Internet, the decades-long romantic journey that Boy Meets World's Cory Matthews and Topanga Lawrence went on, though put to rest long ago in 2000, still keeps you up at night.

Regardless of whether you are all about team Seth or vehemently team Cory, their differing romances prove that when it comes to television heartthrobs, there's quite a range: From the hot-and-cold love that is Gossip Girl's Chuck Bass to The Office's Pam Beesley and Jim Halpert, here are eleven television boyfriends we will all always have a crush on — even after their episodes stop airing in syndication on ABC Family or Nick at Nite.

Remember this scene? After Rory and Dean broke up and Rory was kind of sort of about to go on a date to a PJ Harvey concert with Tristan (aka Chad Michael Murray), Dean pulled his pickup truck right into the courtyard of Chilton and swept Rory off her feet. It was totally proof that Dean's one of the most loyal television boyfriends of all time.

2. Jim From The Office

Of course, even when Pam was engaged to Roy, I could see the Pam-Jim train coming from a mile away, even through all of that will-they/won't-they proposal nonsense.

Sure Chuck Bass could be manipulative, but you gotta give credit where it's due: the man never stopped trying, and he never stopped loving Blair.

Even though they hail from opposite corners of the high school food chain, who could forget their upside-down Spiderman kiss in the rain?

5. Jordan From My So-Called Life

Sure he was emotionally unavailable and kind of a textbook bad boy heartbreaker, but if there was a high school bad boy worth taking on, it would be Jordan Catalano.

Who wouldn't eventually grow to love a wall-buying class clown?

7. Zach From Saved By The Bell

A.C. Slater and Jessie Spano fans be damned — when it comes to romance at Bayside High, no one did it better than Zach and Kelly.

While the series did close with Steve and D.J. reuniting on prom night, in the Netflix sequel Fuller House, it seems that their love wasn't as enduring as we'd all originally hoped it would be. There's still hope, though!

From the moment Topanga walked into Mr. Feeny's middle school class, we all knew all bets were off: Their wedding in Season 7 was practically inevitable.

10. Harvey From Sabrina the Teenage Witch

Though Sabrina and Harvey did end the series together, it's not clear whether they stayed together and would've actually had little witch babies together — but as a Sabrina fan, I like to imagine that they did.

11. Kevin From The Wonder Years

Sure, they might seem slightly mismatched, but that Winnie was one lucky lady.

Say what you will about these throwback TV boyfriends, but at least they were all loyal to their ladies. Take that, Chandler and Ross.