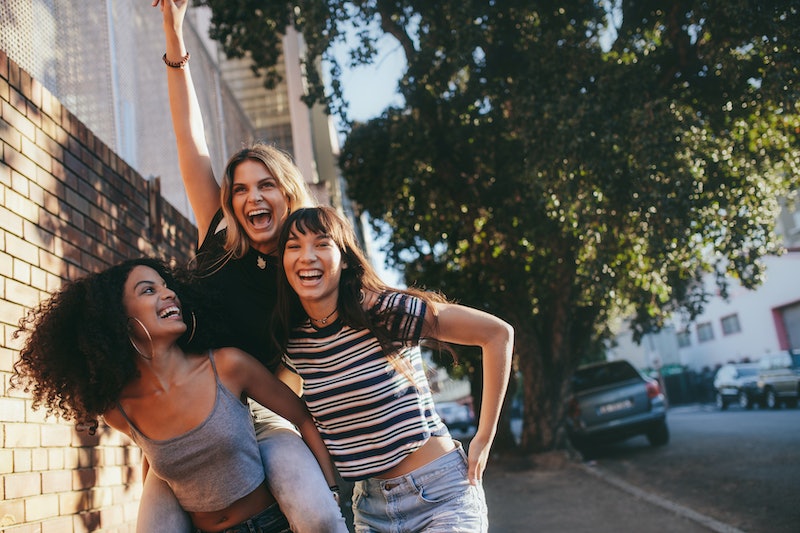 It's a wonderful time to be alive and a feminist, because the movement is becoming more and more intersectional, inclusive, and understanding of different struggles and methods of empowerment for women everywhere. That being said, there's always room for improvement; I, for one, am always striving to discover more ways to make my feminism more inclusive. If we can use that inclusivity to help empower the women around us, then we'll stand far more of a chance of accomplishing our goals — and making the world a better place in the process.

To understand inclusivity in feminism, one must first understand what it means to be an intersectional feminist. At its core, intersectionality is all about recognizing that different identities and social factors intersect to make complex systems of oppression and discrimination. For example, a trans woman of color may have more things stacked against her in life than a white woman, because two of her other identities (trans and woman of color) are persecuted in our society. That doesn't necessarily mean that white women don't have their own set of grievances and struggles, though; intersectionality isn't about undermining one person's struggles — it's about acknowledging everyone's unique struggles and working together to alleviate them.

Once I started to better understand intersectionality, I felt I had a better grasp on how to be more inclusive and accepting with my feminism. Here are seven ways to make your feminism more inclusive and help as many people as possible:

1. Understand That Not Everyone Has The Same Experiences

Many feminists assume that all women go through the same struggles and that the vision of feminism should be one, unified vision promoting one, unified mission. In reality, though, it's important to remember that not everyone has the same experiences; it varies based on each person's individual circumstances. Of course there are many different factors that might play into the experiences each person has, but as one of the most prominent examples, onsider that women of color have very different experiences from white women — which, in turn, demonstrates why it's so important to tackle White Feminism head-on. By White Feminism, I don't just mean feminism practiced by people who happen to be white; it's a particular brand of feminism that excludes women of color and undermines their experiences, making it pretty much the exact opposite of intersectional feminism. A simple example: When it's said that women get paid 75 percent that which men are paid, this figure accounts only for white women. Black and Hispanic women get paid even less than that, and failing to acknowledge that fact is a prime example of White Feminism in action. Recognizing the differences in experiences and in the way the world treats women of color, differently abled people, LGBTQ people, and more is a great way to make feminism more inclusive.

2. Always Include Trans and Non-Binary People

It is so, so important to include trans and non-binary people in the discussion. Remember, feminism looks to subvert the existing cisheteropatriarchy (that is, the cisgender, heterosexual patriarchy) and dismantle the existing system to elevate people who aren't afforded equal opportunity because of their gender or sex. Unless you're a (straight, white) male, you are likely one of these people — that includes women, trans people, and non-binary people.

Being accepting of your own body, as well as working to create visibility for different kinds of bodies, is one important way to make your feminism more inclusive. Some ways you could do this are reciting positive affirmations and never correlating success with specific weight or size. All bodies are good bodies.

4. Understand That Women Around The World Face All Sorts Of Different Issues You May Not Face

Feminism looks different in every country and region, and issues that may be pertinent in one location may be different from those in another. For example, we're lucky enough in the United States to have equal educational opportunity for women, but in many South Asian and African countries, that might be something women are fighting for on a level of which we may not be aware. Make your feminism more inclusive by understanding that the struggle is worldwide, and different from country to country and culture to culture.

5. Watch Out For Subtle Ways You May Perpetuate Rape Culture

Do you find yourself slut shaming your friends for wearing certain articles of clothing or going on "too many" dates? Do you ever use loaded phrases like "stop being a tease" or "stuck in the friend zone?" One important way to make your feminism more inclusive is by watching out for ways you may be perpetuating rape culture and alienating people around you who have been raped or sexually assaulted.

To one woman, feminism may mean having ownership over her body by showing her skin and wearing clothing some might consider revealing. To another woman, feminism may mean having control over her body by covering up and wearing clothes some might consider conservative or a headscarf. Both of these women are feminist, since feminism is all about what makes people feel successful and empowered. Neither one of them is "more feminist" than the other.

7. Don't Immediately Dismiss People Who Don't Know Much About Feminism

I've had a lot of different conversations with women (and people in general, for that matter) who don't identify as feminists or have preconceived notions about feminism that are totally false. It's important, in that case, not to dismiss anyone; instead maybe try having a conversation with them where you can share your understanding of the world, and hear theirsm as well, so you can get a better sense of why they may feel the way they do. It also works the other way, of course; if you have a desire to share your beliefs about feminism with other people, they're more likely to give you the time of day if you give them the time of day without being condescending or dismissive. Respect works both ways.