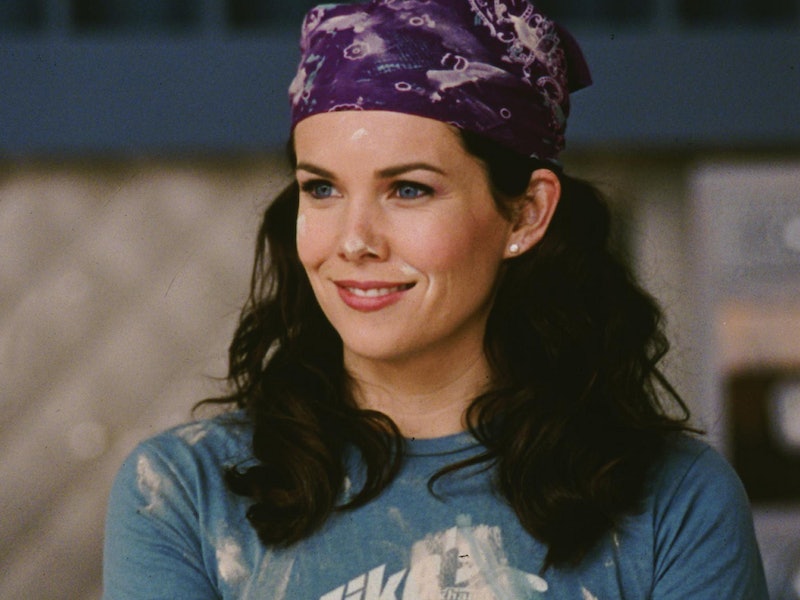 If you were a teenager between 2000 and 2007, news of the upcoming Gilmore Girls revival on Netflix has probably been on your radar for some time. From recreating Lorelai Gilmore's fashion to dissecting which ex Rory will end up with to analyzing the feminist merits of the show's characters, Stars Hollow has been on many Millennial minds. But Lorelai's sartorial prowess — both her most memorable ensembles as well as her haven't-stood-the-test-of-time looks — has been a particular subject of conversation. To me, however, Lorelai's style was about more than the sum of her alleged faux pas. Rather, it was a message for women (and arguably young women in particular, the show's target demographic): A message along the lines of "you do you," but one that felt, for whatever reason, a lot more hard-hitting than that catchphrase's contemporary interpretation.

I remember when Lorelai first took Rory to Chilton. Sporting a tie-dye, slightly midriff-baring top, cut-off denim shorts, cowboy boots, and a longline blazer, she wasn't exactly what you might imagine when you think "outfit for my daughter's first day of uppity private school." But hey, the rest of her clothes were dirty!

It was the first time I'd ever seen a mother like her. It wasn't really the age thing (although the 16-year gap between she and Rory did feel pretty foreign to someone whose eldest sibling was over 30 years her senior). It was more her loudness.

There was a loudness to Lorelai's character present from the very get-go. Not necessarily in a verbal sense, although she did carry herself with unapologetic self-assuredness. It was more her general disorder. She was messy and colorful and not at all conventional — and all those traits translated seamlessly into her wardrobe.

She was also very different to my own mother. Both were incredibly strong, independent women, in their own ways. But mi madre couldn't have been more different from Lor in terms of their values: My mom's conservative Colombian views on morality (which affected her perceptions of sex, education, money, and clothes) and own modest wardrobe seemed, to a younger Marie, as though they were from a different galaxy altogether.

At the time, I associated motherhood with a sense of boredom. The other moms in the small New Jersey town I grew up in were much like my own. I correlated having a child to being forced into ditching your fun clothes, giving up an experimental sex life, wearing only red nail polish, and dismissing questions you didn't know the answer to with the gift of a cookie. I assumed being a mom meant you made a point of playing the mature, authoritative role — demanding said authority over any kind of equal ground.

For a young, Republican-suburbia-restricted-me, Lorelai was like a unicorn. She was amongst the first humans (fictional or otherwise) to set me on a path of questioning my upbringing and asking myself what it was I believed. What it was I wanted, rather than what was expected of me.

For over half of Gilmore Girls' existence, Lorelai sported bits and pieces that Baddie Winkle would probably have a field day with today. Glitz and lace bandanas, an assortment of tie-dye, bright T-shirts layered atop other bright T-shirts, and statement tops were all in her arsenal. As I've grown older and plus size fashion has become more readily available to me, I've started being able to actually dress in the way I always wanted to back when the show aired. And one of the prime characteristics of my wardrobe is a similar sense of childishness.

I own a petticoated pink dress plastered in Peter Pan imagery, and sneakers with Ursula's face on them. I love my "hangry" T-shirt more than most things, and my vintage tie-dye and teddy bear-covered Grateful Dead shirt was totally worth that lost week of eBay-ing. I have a sweatshirt featuring actual plastic dinosaurs and elephants sewn onto its front. I yearn for the day a Rugrats scrunchie comes into my life.

Adulthood terrifies me — particularly all the traditional expectations it comes with: You have to be more career-oriented than fun-oriented. You have to save your money as an investment for your future. You have to get your shit together every time the morning alarm rings (and it always rings too soon). You have to think about planning weddings and babies and mortgages, because that's just how things go. Through fashion that could belong to a very chic 5-year-old, however, I hold onto the opposite of all that. The version of myself I guess wanted more. And Lorelai was one of the first people to tell me that doing so — dressing in such a way, wanting these other things — was OK.

And Lorelai did have her "life together" (whatever that actually means) in plenty of ways. She had an amazing relationship with her daughter, and the pair lived in a gorgeous and quite large old house. She had a job that she actually enjoyed, and was only climbing the ladder on the road to owning her own business someday. Financially stable and surrounded by a wonderful group of people, her life wasn't nearly as messy as her aesthetic. Yet she still didn't come across as your run-of-the-mill suburban mama.

Perhaps it was her relaxed attitude towards sex, or the sheer closeness of her relationship with Rory (at times seeming more like friendship than anything else). Maybe it was her willingness to eat all the food and drink all the coffee, no mention ever being made of "cheat days" or consuming "too many calories." It could've even been the messiness of her bedroom, which we were introduced to early on in the show. More than likely, it was a combination of all of those things. And, of course, her sense of style.

What was even more impressive was that all of this was coming from someone with such a distinct childhood. The daughter of two incredibly well-off parents who lived in Connecticut and had a gold membership at the country club, her path was practically carved out for her from birth. She was meant to go the ivy league path of her predecessors. She was meant to brunch in suit separates that looked straight out of Jackie O's closet, only to participate in a debutante ball a few days later. Instead, she took the road less traveled by her family.

Even as Lorelai got a little older and her style evolved, it never felt like she was losing out on anything. Eventually, her cowgirl shorts and old band tees got swapped for what felt like an endless supply of Diane von Furstenberg wrap dresses — a little more fitting for her life as an inn owner I suppose. But the shift to what most might deem more "mature" dressing never felt like a product of subduing her personality or changing the person she actually was in order to succeed.

Instead, it just felt like a natural change. Much like her life changed, her romantic relationships changed, her work environment changed, and even her relationship with Rory changed, so too did her clothes. The shift from off-duty boho babe to boss girl attire felt as natural as her never-ending love of pizza.

Through her ice cream cone-printed pajamas, penchant for tacky tees, and the evolution of her style as a whole, Lorelai lived her own truth — not the one others wanted of her. Sociocultural demands placed on women in particular feel more daunting than they did then, likely because we're all older and hopefully wiser when it comes to issues of sexism. Said demands can affect everything from how we dress and apply our makeup to the opportunities available to us career-wise. Add to that general sociocultural "goals" like making a ton of money and raising a family in the suburbs, and living (and dressing) as someone who doesn't or doesn't want to fit that mold can become all the more difficult.

But I guess that's what her style always represented: There is no mold. There is no right or wrong way. There is no "success," other than that which you define and cultivate for yourself. Quite simply, there is no need to be someone else's idea of who you are. You're allowed to just be the person you know yourself to be, and surround yourself with the humans, the lifestyle, and the clothes that facilitate as much.